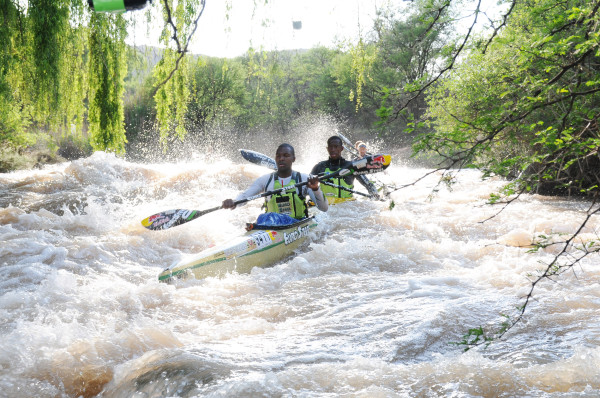 Following a disappointing Hansa Fish River Canoe Marathon the expectant duo of EuroSteel/Red Bull star Sbonelo Khwela (front) and Banetse Nkhoesa (back) will take a few weeks off and then jump right into their 2016 KwaZulu-Natal river season training with the first Dusi Canoe Marathon seeding race coming up in the form of the Umpetha Challenge starting at Camps Drift on Sunday, 8 November. Jetline Action Photo/
Gameplan Media

Pietermaritzburg – The Dusi Canoe Marathon season is fast approaching and the race for top seedings begins in earnest with the Umpetha Challenge with defending champion and current K2 Dusi Canoe Marathon champion Sbonelo Khwela and his partner Banetse Nkhoesa eyeing it as the start of their 2016 preparation when the unique one day race takes place from Camps Drift to the Bishopstowe Farmers Hall on 8 November.

The race, former known as the NCC Development Race, has taken on a new identity since it its name change in 2014 and with the race following the same championship format as the Dusi Canoe Marathon year on year EuroSteel/Red Bull star Khwela will return with the young and exciting Nkhoesa in 2015 to defend the K2 title he and Euro Steel’s Andy Birkett won two years ago.

The pair have been training hard together over the past few months as they both look towards the 2016 Dusi however Khwela was disappointed by the duo’s performance at the recent SA K2 Championships at the Hansa Fish River Canoe Marathon.

“It was really disappointing for us as we were really looking for a top 10 at the Fish this last weekend,” a frustrated Khwela mentioned. “We wrapped our boat at Soutpans Rapid and then had so much time to make up on day two.”

“Although it was a disappointment we were still happy with the way we went on day two, we were flying to try and make up places!”

The pair, who finished fourth at the SA Marathon Championships, have been hard at training at the Prime Human Performance Institute in Durban as part of the KZN Department of Sport and Recreation back Elite Athlete Development Programme and although they are now enjoying some time off from paddling ahead of a chocker block season, Khwela sees the Umpetha as the start of their KwaZulu-Natal campaign.

“We are putting our feet up for two weeks now because we have had a serious period of paddling recently!

“We just want to take some time off before we begin our charge towards Dusi with some big races coming up, starting with the Umpetha.

“There is a little bit of pressure on us with me being the defending champion however we are just going to take it one race at a time when we get going in the build up to Dusi,” a calm Khwela added.

With the Umpetha providing many crews with their first hit out of the 2016 Dusi season, Khwela expects there to be a number of top crews on the water for the race with the Umpetha Challenge being more than just a race for the 2014 Dusi Canoe Marathon champion.

“I think giving the race an isiZulu name has made me closer to the race.

“It is a race that I love and it is always well organised with the Natal Canoe Club Development Programme taking ownership of it and really making it a success.

“It is always a tough race with some really good crews taking part so if we win it will be a great first result for us and will take a bit of pressure off us going forward towards Dusi,” he said.

With a favourable seeding for the 2016 Dusi on the line, Khwela understands the importance of getting their summer season off to a good start at the Umpetha Challenge.

However, with a few weeks away from the boat on the cards for the pair, he is not putting too much pressure on himself or Nkhoesa going into the new season.

“It would be a bonus to come first at Umpetha but it will be the first time that Banetse and I will be running with the boat and the finish is on a portage so we will just have to see how it goes.

“Not having run together we will need a bit of time to get ourselves running fit but what better race to start our Dusi training than the Umpetha Challenge?” he enthused.