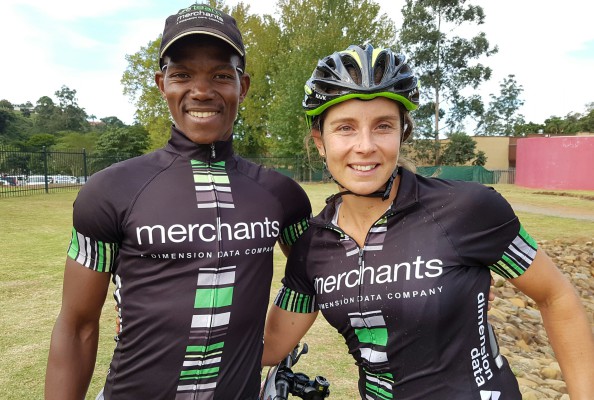 Having both been on the podium before the Merchants duo of John Ntuli and Jeannie Dreyer will hope to continue this trend when they battle it out for the mixed category crown at the 2016 BSi Steel dusi2c starting in Pietermaritzburg from 11 to 12 June. Julian Goldswain/
Gameplan Media

Pietermaritzburg – The 2016 edition of the popular BSi Steel dusi2c mountain bike race will set off from Camps Drift in Pietermaritzburg on Saturday with hundreds of riders setting their GPS navigation devices to guide them through the heart of the Valley of a Thousand Hills to the overnight stop at the iconic Mfula Store before their Sunday journey on to Blue Lagoon in Durban, shadowing the route of the famous FNB Dusi Canoe Marathon.

The meteorologists had predicted icy cold conditions for the two days to Durban and the predictions have eased off slightly although riders can expect a sprinkling of rain on Saturday and some frosty conditions on Sunday morning.

The 124 kilometre journey will take riders across the Msundusi and Mngeni Rivers on no less than 40 different occasions on their quest to reach the ocean in one piece on Sunday and with some demanding trails and exciting single track riders will have to keep their wits about them through the two days.

At the front of the field the same suspects as 2015 will come to the fore with three-time defending champion, Team TIB’s Andrew Hill, teaming up with regular stage racing partner Tyronne White for the two-day tussle. The pair will be hunted down strongly by a number of Martin Dreyer’s RMB Change a Life MTB Academy duos.

The ground breaking academy will have three teams on the start line however two of the duos will not be the same combinations as 2015 with last year’s runners up Mazwi Smimango and Bongumusa Zikhali taking on new partners as the former teams up with Mboneni Ngcobo and the latter with Siyanda Masango.

The final two-man Change a Life outfit that will be vying for a spot on the podium is that of Sipho Kupiso and Ndumiso Dontso. The pair finished third in 2015 and will be hoping that they can push the favourites all the way to the sea in an attempt to knock Andrew Hill’s Team TIB off their thrown.

The regular faces of the Team Safire pair of Warren Price and Trevor Rowe have vowed that they will still be mixing it with the younger pairs at the front of the race when they set off from Pietermaritzburg and will look to emulate their tied third place finish in 2014.

The mixed category should prove to be another fiercely contested race with two outfits standing out from the rest of the field as the defending Team Sani duo of Bianca Haw and Andrew Houston take on the experienced Merchants pair of John Ntuli and Jeannie Dreyer.

Dreyer, who rode with husband Martin to third in the mixed category in 2015, will be hoping to use the local knowledge that Ntuli has developed over the years to their advantage however the short, sharp racing will be a challenge.

Houston and Haw are no strangers to the Valley of a Thousand Hills either with a number of FNB Dusi Canoe Marathon’s under their belts along with a history of riding through the valley. Haw’s impressive Cross Country pedigree will be an advantage through the flowing single track sections of the course.

The near 400 riders will be excited to see the overnight stop at the Mfula Store on Saturday as they settle down with a cold Black Label quart of beer and watch the sun set in one of the more pristine areas of KwaZulu-Natal before their exciting 60 kilometre ride into Durban.