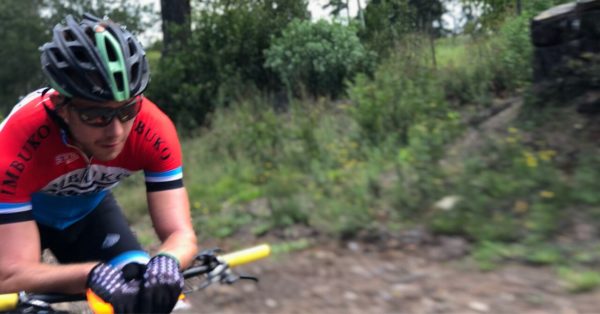 Stage 1 winner Dylan Rebello cruises towards his “own backyard” at Phantom Pass on the first day of racing at the Knysna Bull made personal by Constantia Insurance.

Dylan Rebello, riding as a solo entrant, put local knowledge to good use as he claimed Stage 1 of the Knysna Bull made personal by Constantia Insurance. Rebello lives in Knysna, and was thrilled to race on his home turf.

The former South African junior marathon champ was able to see off strong challenges from Alan Gordon and Timothy Hammond (Insect Science) and Erik Kleinhans and Robert Hobson (Canyon Topeak/ETW) to win the first stage of the four-day event in a time of 2:32:53. Gordon and Hammond crossed the line in second (2:33:14), with Kleinhans and Hobson in third (2:34:06).

The Knysna Bull Stage 1 started in Rheenendal just outside Knysna, finishing at the Dry Dock restaurant in the Knysna Waterfront. But before that, participants tackled Stage 0 – a complimentary pie and coffee stop at the Ou Meul in Riviersondered courtesy of sponsor Constantia Insurance – and the urban Prologue on Thursday night.

The evening Prologue is a unique and fun innovation at the Knysna Bull, with riders charging out of the waterfront area on a 6km attack of the town.

Railway lines, pavements, bike shops, restaurants, an underground parking lot and a sleepy residential area all make up the helter skelter route. The Prologue is not compulsory, however, with some riders choosing to spend their “6km” at the nearest bar, setting the laid back tone for the event.

“We try to make every day special and different; so it’s been great to have a sponsor like Constantia Insurance come on board with the same attitude,” says organiser Pax Mosterd. “Riders were raving about their pie and coffee, and the Prologue, and I think soon they will be raving about the three unique stages of the Knysna Bull.”

Once the racing proper started on Stage 1, it was the usual suspects leading the way from the Quinta da Montana start in Rheenendal.

For the rest of the race it was Rebello on his own, eventually caught by Canyon Topeak/ETW and Team Insect Science not far behind. Rebello’s plan, based on his insider knowledge of the area, was to pull away on Phantom Pass just before Knysna. He lives on the Pass and was ready to put his home ground advantage to good use, but he was able to pull away from Kleinhans and Hobson before the descent.

“It was great,” said Rebello. “I literally rode through my backyard today. It was a fantastic day of riding. I always tell people that the trails hidden out here are some of the most picturesque that I have ever ridden. This morning was incredible, climbing higher and higher into the mist. Then, of course, the downhills are great fun too. Overall, it was a lot fun.”

In the solo ladies race, Teresa Ralph was home in first place, while 2017 Absa Cape Epic champ Jennie Stenerhag, riding in the mixed category with Craig Gerber, was first home in the mixed.

Stage 2 of the Knysna Bull made personal by Constantia Insurance takes riders on a 65km journey through the iconic trails of the Harkerville forest. Before riders can enjoy Stage 2, though, they will have to contend with the Bullpen, a beer tasting for every entrant at the Mitchell’s Brewery.