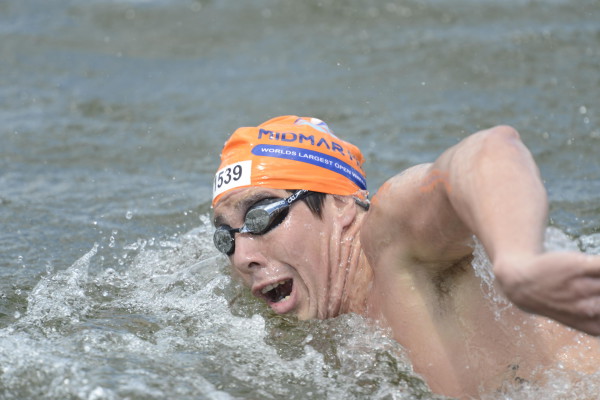 Chad Ho added another string to his bow as he claimed the World Championship title for the 5km open water swim at the recent FINA Swimming World Championships and through a successful partnership with the KZN Department of Sport and Recreation backed Elite Athlete Development programme the 25 year old is looking to qualify for the 2016 Olympics in Rio. Anthony Grote/
Gameplan Media

Durban – Having returned home from the FINA Swimming World Championships in Russia with a gold medal in the 5km open water swim Durban based Chad Ho is grateful for what the KZN Department of Sport and Recreation backed Elite Athlete Development Programme has helped him achieve and their backing for what he hopes to achieve in the future.

Ho was brilliant in his efforts to beat the world’s best in Kazan, Russia to claim his maiden World Championship title and the six-time aQuellé Midmar Mile champion has been happy with his 5km gold medal although he was disappointed with how his World Champs ended.

“I would say that the World Champs was pretty successful for me,” Ho mentioned. “I was very happy with my gold medal – being a world champion is a great feeling – but the 10km open water race was a little bit disappointing.”

The Durban resident believes that the EADP programme offers more to him than he has ever had at his disposal in the past and with a year on the programme under his belt he hopes that he can continue to gain through the help of the professionals at Prime Human Performance Institute.

“I train at Prime three times a week at the moment but I have the choice to train more if I want to. However with swimming I find that three times is the right amount for me.

“The people at Prime are really friendly and are so willing to help out if there is an issue. It means that I can just concentrate on swimming and competing with everything else being taken care of.

“Having a world class facility at home is a major advantage as we don’t have to travel overseas if we need professional help and the entire facility and programme just offers us athletes something that we have never been exposed to before!” Ho mentioned gratefully.

The 25 year old reiterates the convenience and the importance of having a ‘one stop shop’ in his home town.

“Having Prime right here with its qualified professionals is hugely important for me because if I have an injury or something they are the first people I go to for advice because they are at the cutting edge of science here.

“My next big ambition is qualifying for the Rio Olympics next year and the team at Prime as well as my coach will meet and we will devise a training programme and a plan that will hopefully have me at my best when qualifying comes around,” he added.

The Hypoxic Chamber at Prime is a popular choice for athletes as they are able to set altitudes at which they will train and Ho is another one of those that uses the chamber to try and get as much out of training as possible.

“We focus a lot on spinning at altitude because of the benefits of being able to cope with higher altitude.

Being comfortable at altitude is something that we see as being a big advantage for us so the chamber plays a big role in my training and we all understand the significance of having such a hi-tech piece of equipment at our disposal.

“The ice baths are also important for me and I use them often after events to try and recover which I find to be very beneficial,” the long distance swimmer stated.