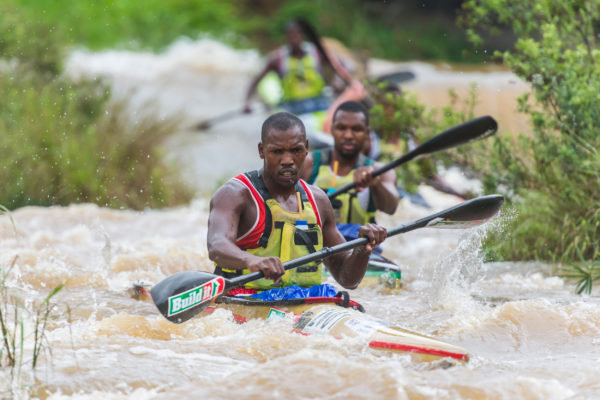 With a second at the Umpetha Challenge and a second at the Ozzie Gladwin Canoe Marathon, presented by Parklane Superspar, Build it/Williams Hunt’s Thulani Mbanjwa is winding back the clock and still proving that he can fight it out with the best in the business ahead of the 2017 FNB Dusi Canoe Marathon in February. Anthony Grote/
Gameplan Media

Pietermaritzburg – At the conclusion of the Ozzie Gladwin Canoe Marathon presented by Parklane Superspar this past weekend, the front-runners for February’s FNB Dusi Canoe Marathon have started to emerge with the early season form guide showing that the pre-Dusi favourites are well on course for a positive result in eleven weeks’ time.

With the nationwide drought yet to relinquish its grip, paddlers have had few opportunities to get onto the river and test their skills so when the season-starting Umpetha Challenge and the recent Ozzie Gladwin – the first two Dusi seeding races – came along, it was imperative that paddlers took advantage of the chance to have a hit out in race conditions.

The Umpetha Challenge, which took paddlers from Camps Drift to the Bishopstowe Farmers Hall, was a tightly contested one with Euro Steel/Red Bull’s Sbonelo Khwela claiming his fourth win in a row at the portage-ending showdown.

Interestingly it was Build it/Williams Hunt’s Thulani Mbanjwa who claimed the runners-up position, showing that despite being unable to maintain the pace Khwela set on the run, the evergreen star and 2008 FNB Dusi champion is still as much of a threat on the water as he has ever been.

One of the most interesting developments to come out of the Umpetha Challenge was the rise of Bridgitte Hartley. The Euro Steel star and sprint canoeing ace made her 2017 Dusi podium intentions clear when she won the women’s race at the 18km hit-out in October.

As the Umpetha Challenge gave the paddling fraternity an early indication as to who was likely to be a threat come Dusi, many paddlers opted to skip the clash and instead focus energies on the Ozzie Gladwin at the end of November as their first attempt to gain valuable seeding points.

The Ozzie Gladwin, another great early season form gauge due to its good balance of running and paddling – despite not being on either the uMsundusi or uMngeni Rivers, gave many their first real sight of 2017 favourite, Andy Birkett.

A powerful Ozzie Gladwin performance by Birkett, who took some time away from the sport recently after throwing all his winter efforts into producing a silver medal in the men’s K1 race at the ICF Canoe Marathon World Championships, again proved he is the man to beat.

The Euro Steel ace was up against a tough field which included Khwela, Mbanjwa, Banetse Nkhoesa,Siseko Ntondini and a number of other Dusi top ten hopefuls. The five time Dusi winner’s pedigree and confidence in a boat meant that he was however rarely truly challenged during the 26km race.

Having broken her long-running FNB Dusi duck in 2016, Euro Steel’s Abby Solms will be looking to add a K1 title to her K2 crown she won in 2016 however she is unlikely to have it all her own way with Hartley set to be breathing down her neck from 16-18 February.

Solms’ cool and calm demeanor is one of her major strengths and she goes about her business meticulously with an eye for detail. This attitude, coupled with her vast experience and current dominance of women’s paddling, currently puts her as early-season front runner for the women’s K1 Dusi crown.

Solms gave competitors and spectators alike a taste of what she is capable of at the recent Ozzie Gladwin where she took the women’s race honours in a solid display of tactics and ability, sounding ominous alarm bells for her nearest rivals.

A number of potential Dusi top ten paddlers have had their eyes focused on ocean racing recently. The likes of Hank McGregor and Jenna Ward are two of these paddlers that stand out and, if confirmed, will be undoubtedly represent strong podium threats come Dusi.

The next major race on the 2017 FNB Dusi calendar is the StaminaGro 50 Miler this weekend. Despite taking place in a reduced, one-day format due to the on-going drought, the iconic event still carries significant Dusi importance for many.

The 2017 FNB Dusi Canoe Marathon takes place from 16-18 February. More information can be found at www.dusi.co.za