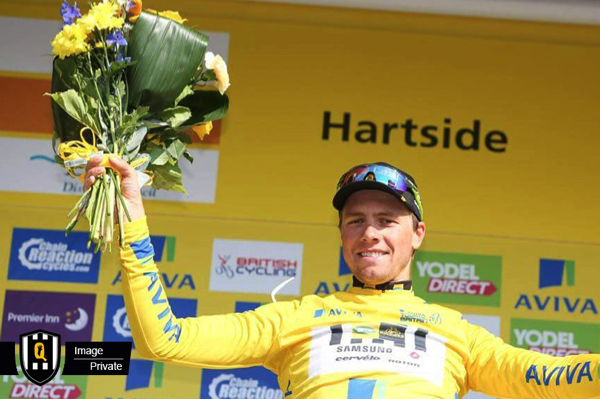 There have been a lot of talks before stage 5 of the Tour of Britain. The peloton faced 166 lumpy kilometers from Prudhoe to the summit of the scenic Hartside climb, a stage made to reshuffle the overall. And MTN-Qhubeka p/b Samsung was set to leave its mark on it.

Edvald Boasson Hagen and Serge Pauwels headed into the stage with good positions in the overall, giving the team options to play with. When an early group of five broke clear, MTN-Qhubeka p/b Samsung stayed near the front of the peloton.

The break was able to establish a lead of more than six minutes. Yet with the final climb looming, the team took control and increased the pressure together with Sky.

The climb up Hartside averages around 5 percent over 8 kilometers. But it wasn’t for the break to reach it. The overall contenders left no room for the leaders and hit the last race kilometers hard.

Wout Poels (Sky) attacked several times but Edvald was able to cover all his moves. With 1 kilometer to go the Norwegian national road race champion tried his luck. He opened up gap to most chasers but was unable to drop Poels. In the end he crossed the line in 2nd place.

The result was good enough though to earn him the overall lead at the Tour of Britain.

He goes into tomorrow’s stage 8 with an advantage of 1 second over Poels.

The team did a really good job today, especially Reinardt who rode strong to keep the break within sight. On the last climb there were a lot of attacks and it was really hard. But the climb suited me, so I tried my luck with one kilometer to go. Unfortunately, I faded in the headwind on the last hundred meters and Wout Poels passed me for the win. I’m happy though to take yellow and hope I can hold onto it. It would be nice for the team and Qhubeka to win the Tour of Britain.
About MTN-Qhubeka p/b Samsung
Team MTN-Qhubeka p/b Samsung was founded in 2007, steadily working its way up from a regional team to now being a Continental Pro team with bases in South Africa and Italy. MTN-Qhubeka p/b Samsung’s goal is to give talented African riders a path into the pro peloton while raising funds for Qhubeka. In 2015, MTN-Qhubeka p/b Samsung are inviting you to help them mobilise 5,000 kids on bicycles. To contribute to the #BicyclesChangeLives Campaign, click here.