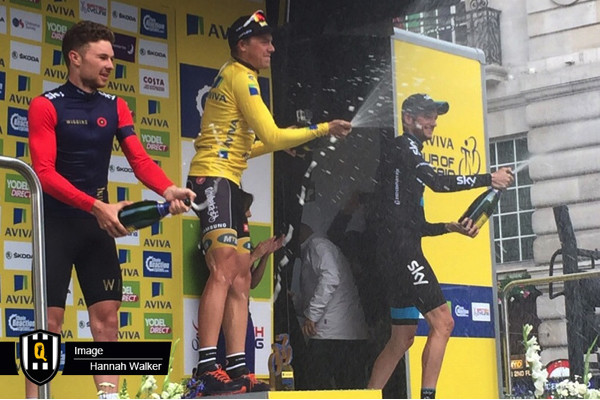 Edvald Boasson Hagen secured the overall at the Tour of Britain esrlier today when he crossed the line of the final stage in London in 4th place. The stage win was awarded to Elia Viviani (Sky).

The Italian crossed the line in second place behind André Greipel. Yet the German had crossed Viviani’s line, pushing him towards the barriers. The race commissaires relegated Greipel, leaving the Italian his 3rd win this week. Juan Lobato (Movistar) moved up to 2nd, Matteo Trentin (Etixx-QuickStep) to 3rd.

The stage in the heart of London was animated be an 8-man break with last year’s overall winner Dylan van Baarle (Cannondale-Garmin). The group went clear after the first intermediate and stayed away until 10 kilometers to go.

Team MTN-Qhubeka p/b Samsung had kept control over the race for most of the day, keeping Edvald out of trouble. The Norwegian champion took the overall ahead of Wout Poels (Sky) and Owain Doull (Wiggins). He is the first double winner of the Tour of Britain in the history of the race.

The team did a fantastic job today. The pace was quite high from the beginning but we stayed in control for most of the time. When the group went we kept watchful. I’m really happy to win the overall. It has been a fantastic week with good crowds and a good support, also in terms of our 5000 bikes campaign.
About MTN-Qhubeka p/b Samsung
Team MTN-Qhubeka p/b Samsung was founded in 2007, steadily working its way up from a regional team to now being a Continental Pro team with bases in South Africa and Italy. MTN-Qhubeka p/b Samsung’s goal is to give talented African riders a path into the pro peloton while raising funds for Qhubeka. In 2015, MTN-Qhubeka p/b Samsung are inviting you to help them mobilise 5,000 kids on bicycles. To contribute to the #BicyclesChangeLives Campaign, click here.