Ekermans returns to Paarl Boxing Day 50 years after his victory 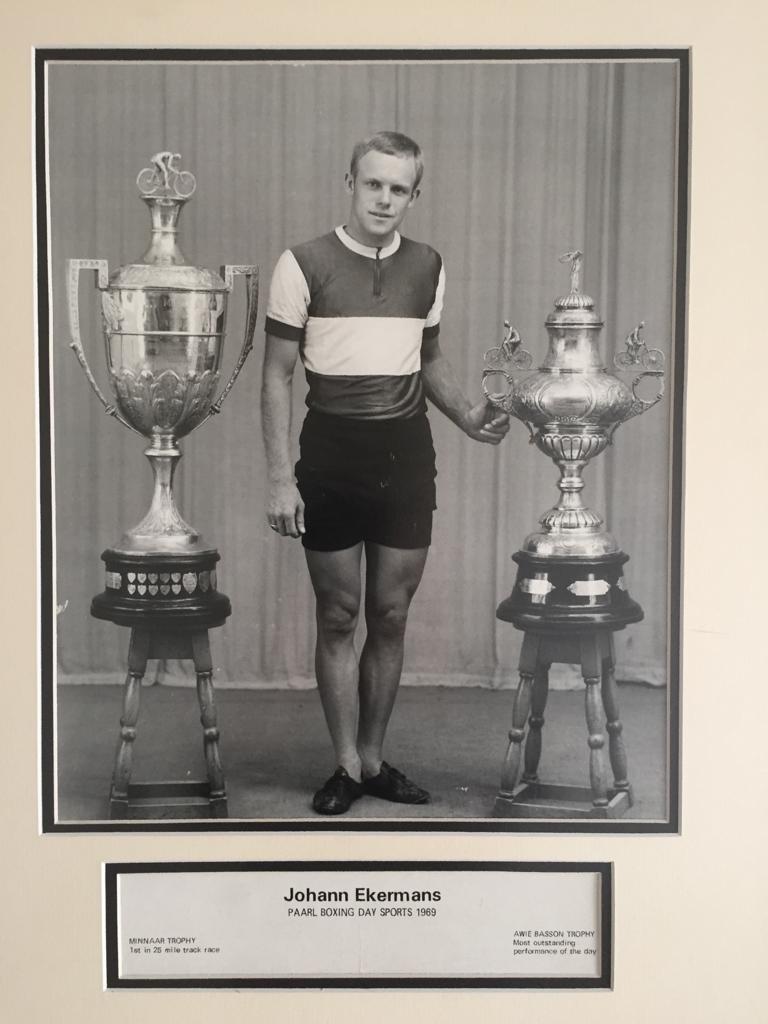 The Paarl Boxing Day Track Challenge will host a very special guest at this year’s 122nd staging of the historic sporting event following the news that 25 Mile winner Johann Ekermans will attend the meeting to commemorate the 50th anniversary of his victory in 1969.

As is still tradition today, the winners of these trophies were not allowed to take them home but were afforded the opportunity of a studio picture (see picture). The trophies were then, and even more so today, too valuable to allow them out of the stadium. The massive Minnaar Trophy (pictured left) is made of sterling silver and dates to 1908.

The Paarl Boxing Day Track Challenge, presented by the Drakenstein Municipality, is the oldest cycling event in the world. The meeting has not skipped a year since its inception in 1897.

The event takes place on 26 December annually and attracts South Africa’s top professionals as well as a host of international riders who tackle each other for a share of the R100 000 prize purse in front of a capacity crowd of 5000 spectators at the Faure Street Stadium in Paarl.

Ekermans recalls his victory in vivid detail. “It’s undoubtedly one of finest moments and best memories of my life. I recall the moment like it was yesterday when I crossed the finish line a half a wheel length ahead of Wiele Wentzel. At that moment I was so proud that my chest must have been a whole wheel length in front of his,” chuckles Ekermans.

“It was and still remains the biggest moment of my cycling career.”

To win the title in 1969 he edged out two Springbok cyclists into second and third respectively. Wentzel came in second and Eddie Kriel third. John Mance, who rode with Ekermans at the De Beers Cycling Club, came in fourth.

“John Mance and I are still good friends and we see each other regularly. He and his wife, Nina, attended my 70th birthday recently.”

Ekermans was involved in a dramatic mass pile-up in the 25 Mile in 1971, which eliminated many of the favourites that year. “I was really disappointed, but then that’s track cycling – the margin for error is very small,” he said.

Ekermans still rides his mountain bike regularly in his hometown of Nigel on the East Rand. “I also have a ‘town’ bike with a trailer and my grandchildren love it when I tow them around in the trailer.

“I have also developed a real passion for bowls, and I spend a lot of time on the bowls lawns.”

Ekermans has simple advice for anyone who aspires to winning South Africa’s most coveted track cycling title: “Train, train, train!”

Entries are now open for this year’s Paarl Boxing Day Track Challenge. Cyclists with an international or domestic racing license are permitted to take part in the historic meeting.

For more information go to www.hecticpromotions.co.za