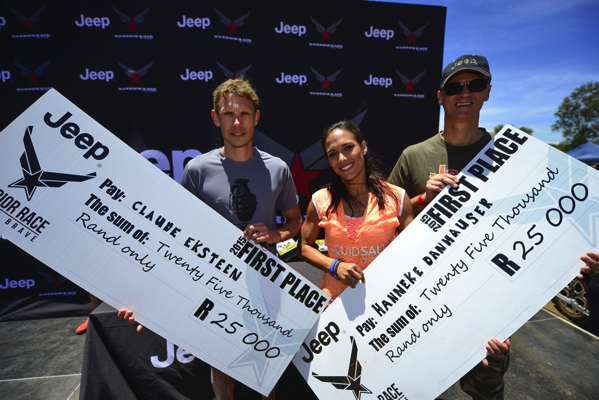 South Africa’s largest obstacle course event, the Jeep Warrior Race, got even bigger this weekend when the series of eight events culminated at Zebra Country Lodge North of Pretoria. The event attracted a record 9000 participants and more than 3500 spectators and also doubled as the national championships for the elite BlackOps event.

Fresh off solid performances at the OCR World Championships in Ohio, it was always going to be a scrap of note for the top spot at this weekend’s finale, with most all the country’s big names fighting it out for the R25 000 for winning male and female athlete. The elite men’s race saw former professional triathlete, Claude Eksteen, set the early tempo as expected on the running components with a thundering Thomas van Tonder closing down on each obstacle in hot pursuit.

The extremely hot and dry conditions and tougher-than-usual running leg, took an early toll, ruling out pre-race favourites like Greg Avierinos and Jay Jay Deyssel, but saw the surprise return of Michael Joubert. Joubert was the very first winner of the R100 000 prize money at the finale two years ago.

Eksteen eventually showed sheer class, conquering his nemesis obstacle on his first attempt to claim both the R25 000 prize purse on the day, the R25 000 bonus for the series win, as well as the keys to the Jeep Renegade that he will be driving until the first event in the 2016 series. The podium was completed minutes later by Van Tonder and Joubert, who were second and third respectively.

In the women’s race, a flawless performance and impressive show of dominance by Hanneke Dannhauser saw her lead from start to finish, with an eventual 30-minute lead over second place.

The exceptionally tough Nationals course set out for the elite BlackOps took its toll and only two more women managed to overcome all obstacles unassisted with Team Jeep’s own Dominique D’Oliviera claiming second spot behind Dannhauser and 35-39-year category OCR World Champion, Jetaime Ribbink, rounding out the podium. Dannhauser also walked off with the R25000 for overall series win, doubling up on her cash winnings on the day that she’ll be driving home in her prize Jeep Renegade.

According to Fritz Pienaar from Advendurance the company behind the organisation of the Jeep Warrior Races, this was the biggest event he’s been involved in in more than 15 years of eventing. In addition to the festivities at the finish zone, there were numerous exhibitions and even helicopter flips for the public.

Pienaar said that part of the success of these events is the fact that there are various distances to choose from, making it accessible for any fitness level and the barrier to entry to these events is very low – you only require a sense of adventure and a pair of old running shoes.