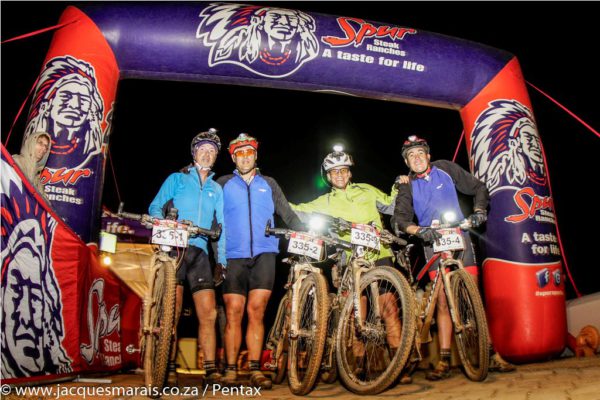 While most riders take on the Trans Baviaans in teams of three or four the elite race has most often been won by teams of just two riders. Photo by Jacques Marais/Pentax.

With the road conditions better than they have been in years and with a stacked field of elite riders, including three teams containing previous record holders, the 2017 Trans Baviaans could be the fastest yet. Now in its third year of the two event, over consecutive weekends, format the country’s top ultra-endurance mountain biking specialists have focused their attention on the first weekend – which sees the riders race from Willowmore to Jeffreys Bay, through the Baviaanskloof World Heritage Site, on the 12th and 13th of August.

Heading up the race favourites are Timothy Hammond and Matthew Beers, riding in the colours of SPOT Africa Ryder RED-E. Hammond set the current course record with Timo Cooper in 2013, stopping the clock after 230 kilometres of racing in a time of 8 hours 17 minutes and 45 seconds.

Speaking two weeks before the race Hammond reflected that his training has gone well. “The bulk of my training over the past month has been strength work on and off the bike. I did two weeks at altitude in Europe towards the end of June in preparation for the rest of the season. The next two weeks will involve some high intensity sessions to prepare for the efforts needed on the big climbs in the middle of the race” he said.

While Hammond’s Trans Baviaans partner Beers is arguably the strongest rider in the race, his pedigree lies in single day marathon events and stage races rather than ultra-marathons. “It’s been good pretty much the same preparation as normal, I just had to throw in some long rides, but I think you just have to be tough mentally at the end of the day” Beers commented when asked about his preparation.

Looking to challenge Hammond and Beers’ perceived favourite status are last year’s runners-up, Hanco Kachelhoffer and Pieter Seyffert, and the winners of the second event in 2016, Mike Posthumus and Chris Wolhuter. Kachelhoffer and Seyffert are joined in their Ellsworth NFB 1 team by Armand Swanepoel. Adding a third rider to the team has always proved tricky in the quest for Trans Baviaans victories, but as Seyffert explained Swanepoel will add local knowledge to the squad: “Armand is a local rider from the Baviaans area, he was inspired by our performance in last year’s event decided to challenge himself a bit with us by asking if he could ride in our team this year. We make a point of it to bring as many people as possible back to events that we really enjoy and this is definitely one of those events.”

“We really enjoyed last year’s event but made every mistake possible, so the goal this year would be to make fewer mistakes and to try to be as constant as possible” Seyffert continued. “From our experience in last year’s event the ideal place to attack would be ‘Neverender’. It is very late in the race were you really start feeling pressure so if you were able to conserve some energy until there it would be the perfect place to go.”

In the 2016 race Billy Stelling and Lourens Luus did just that. Stelling, who had appeared to be struggling leading up to ‘Neverended’ forged ahead while Luus stopped at the self-check-in check point atop the climb. Seyffert and Kachelhoffer stopped together and were then unable to react when Luus attacked to rejoin his partner up the road.

A similar mix of power and race wiles can be expected from Posthumus and Wolhuter. When asked who he expected their toughest competition to be Beers responded: “I would have to say Mike Posthumus and Chris [Wolhuter]… I know Mike very well and he is an animal…” For his part though the renowned doctor of Sport Science had the following to say: “I expect the race to start warming up coming out of water point two at the 113 kilometre mark, unless Hammond and Beers decide that the first 100 kilometres is too pedestrian for them. But a race like Baviaans is not won by an attack; it’s won by not blowing or fading in the last 50 kilometres!”

Among the other favourites are Timo Cooper and Erik Smuts; Richard Simpson and Joshua Nuttal; and Pieter and Heine Lategan. The Lategan brothers still hold the record time for the fastest ever Trans Baviaans, but that was set in 2010, while the course was still a few kilometres shorter. They have not raced the event for a number of years and while outsiders for the podium, they could capitalise on other teams getting their race strategy wrong and expending too much energy early on. Cooper and Smuts are in a similar situation with full time jobs limiting their training time, Cooper in fact rated “the distance and us being unfit” as their biggest challenges at the 2017 Trans Baviaans.

The final team of pre-race favourites previewed here are the UCT Cycling Club team of Simpson and Nuttal. It will be the pair’s first Trans Baviaans together and Nuttal’s debut. “The plan of action for us is just to ride and see how the race develops. Rich [Simpson] rode the race last year with his Dad, William Simpson, and thus knows the route a bit better than me as I am a newbie at this event. At the end of the day, we will have to see how the legs are feeling on route. We entered the event to ride bikes… a good result is a bonus!” Nuttal concluded.

The women’s race has been thrown wide open by the potential absence of the defending champions Theresa Ralph and Amy McDougal, the pair were dominant in 2016, when they rode as Galileo Risk Valencia, and McDougal in particular has been in fine form thus far in 2017.

Likewise the mixed category could see a closer race than in recent years, as Johan Labuschagne will not be partnering up with perennial category favourites Neil Ungerer and Yolandi de Villiers. The Ultimate Cycling Knysna team will for the first time compete as a duo rather than trio; but such is their strength and Trans Baviaans experience that they will still be tough to beat.

Mountain biking and Trans Baviaans fans will be able to find out all about the 2017 race by going to the Live Event Page and by watching the live race show on the Trans Baviaans Facebook page, at 22:00 on Saturday the 12th of August. Fans can also stay updated throughout the event and follow the race build-up by following @EcoBoundMTB  on Twitter or @transbaviaans on Instagram. For more information visit www.transbaviaans.co.za.