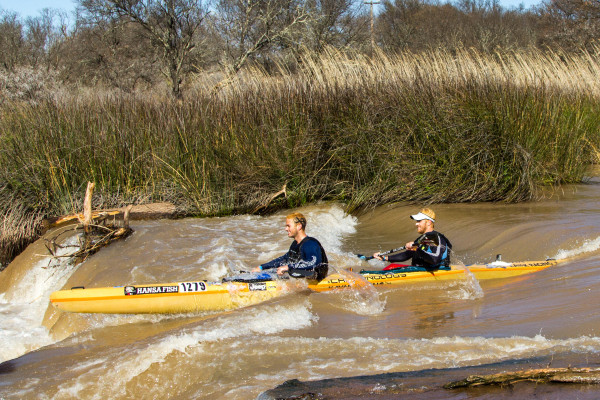 2013 saw Maclaren and Van der Walt surge to a memorable fourth place Hansa Fish finish – despite still being an Under-23 combination – and two years on the pair are confident they can take step things up yet again as they look to do battle against their more senior rivals.

“We’re just so amped for this year’s Hansa Fish!” said an eager Maclaren.

“Even though things didn’t quite go our way in 2013 with us having a swim early on, etc., fourth was still great.

“It would be silly not to say we want to better our result this year though; hopefully a podium is on the cards, or maybe even better!” he added determinedly.

Enthusiastic ahead of October’s Cradock assignment, the pair are also well aware of the magnitude of the challenge that stands in front of them if they are to stand aloft the podium.

“Crews like Hank and Jasper and Andy and Greg are unbelievable and it will be a really tough task taking them on at Fish.

“We’re still quite young and while a guy like Grant van der Walt was able to box with the big boys from a young age, the rest of us know we’ve had to bide our time.

“I feel we’ve now paid our school fees to a degree though and after this year’s SA Marathon Champs in Pietermaritzburg, Brandon (van der Walt) and I have a bit of a bone to pick with them,” Maclaren cautioned.

Despite not going to World Champs as a pair, Friday still sees Van der Walt – a teacher at Bergvliet High School – jetting off to Győr, Hungary as he looks to go one better than his 2013 runners-up finish in the Under-23 Men’s K1 clash.

The Kalk Bay resident’s Worlds preparations have impacted on his and Maclaren’s time in the boat together however the duo are not concerned by this ahead of the Cradock clash due to their strong bond both on and off the water.

“Brandon is absolutely flying at the moment!” said Maclaren.

“At last week’s Peninsula time trial – which on any given day could have as many as eight world champions on the start line – Brandon went and smashed the K1 record as he’s looked really good at our Orka Squad trainings!”

“I guess for me it’s just about trying to avoid being baggage in the back of the boat,” laughed the Newlands resident.

While the title hopefuls’ are well aware of the McGregor/Mocké and Birkett/Louw threats, the pair believe their challenge may in fact be an even taller one than that.

“Who knows what the likes of Ben (Biggs) and Ali (Glass) are planning or what they might pull out of the hat, just as they did two years ago on day one.

“Sbonelo Khwela and Banetse Nkhoesa looked really strong at SA Marathon Champs and you can never discount the chance of an international crew or two being at the Hansa Fish!” added Maclaren.