Enduroman. And the best pulled pork burgers ever.

Enduroman. By far the toughest race I have ever done. In the event I did my longest ever MTB and trail run. Needless to say that although I prepared as best I could I was not quite ready for the distance. But that’s okay. It’s good to get chucked out of one’s comfort zone now and then. I am super keen to go back next year and give it a better bash!

In June when I signed up for the race it sounded faaaaar away on the 27th of September, but the time flew and before I knew it I was having to taper. I thought that it would be a good challenge and a way of keeping me motivated through a long, wet Cape winter. My longest race up until this point was Xterra Grabouw which was a far cry from what I would now attempt and I was properly daunted to tackle a 2.5km swim, 80km MTB and 21km trail run.

Something that I didn’t factor in was the weather. We arrived in Franschhoek in freezing temperatures and icy rain. All of a sudden I was a bit stressed, I wasn’t prepared for this and I didn’t really have the necessary gear. My hands were so cold that I couldn’t even squeeze lube onto my chain while setting up my transition area. The rain made getting ready difficult and I scrapped any kind of warm up. The water was also pretty cold so I decided on a dry-land warm up.

My best discipline is the swim. This would take me around 35min. In an 8 hour race that is really not much and I didn’t really feel that much would be won or lost here. 2 min gained or lost was neither here nor there. 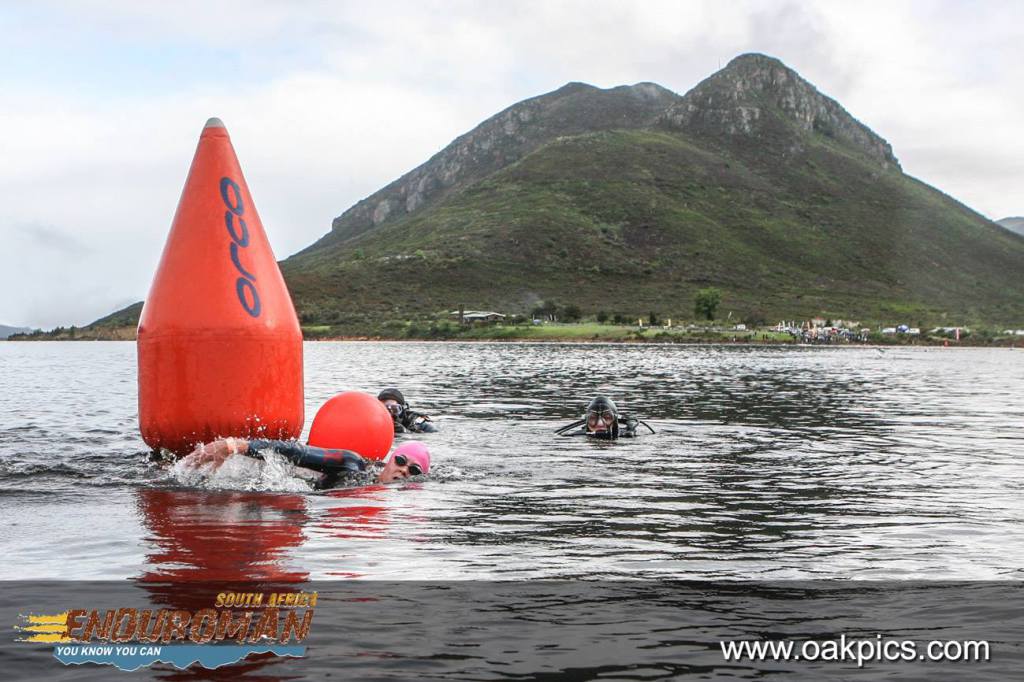 I swam at a steady pace for the 2.5km. I had Raynard Tissink touching my toes for the first lap before he blew past me at the start of the second. During the second lap I saw a rainbow over the water and was extremely relieved to realise that it wasn’t going to rain the whole day. 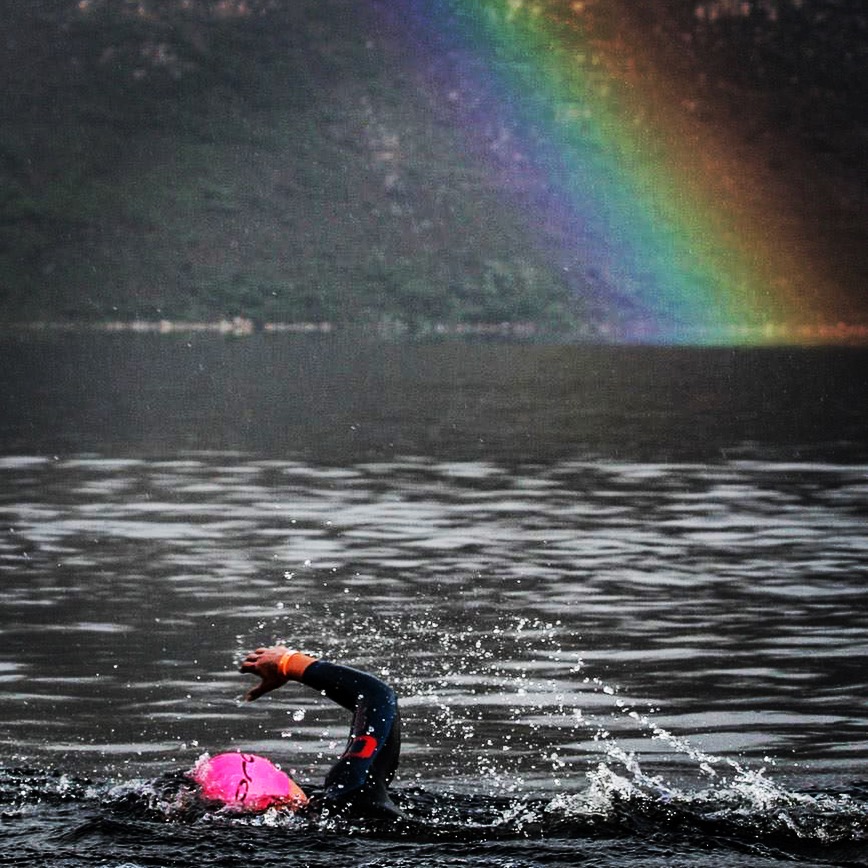 I struggled with cold hands in transition and took my time getting ready for the longest leg. Gloves, socks, G-Form knee pads (there was money on the fact that I would fall somewhere in the 80km and I decided to mitigate losses and wear them. Plus I just feel more confident with them on), waterproof gillet and hydration pack.

Straight out of transition we were sent up a mountain. Anyone who has done a triathlon will tell you that the first 5 kilometers on the bike are super hard. It’s like all the blood is in your arms from swimming and suddenly needs to redistribute to your legs. So being sent up a loose, rocky mountain with no legs in icy rain is a tough ask! 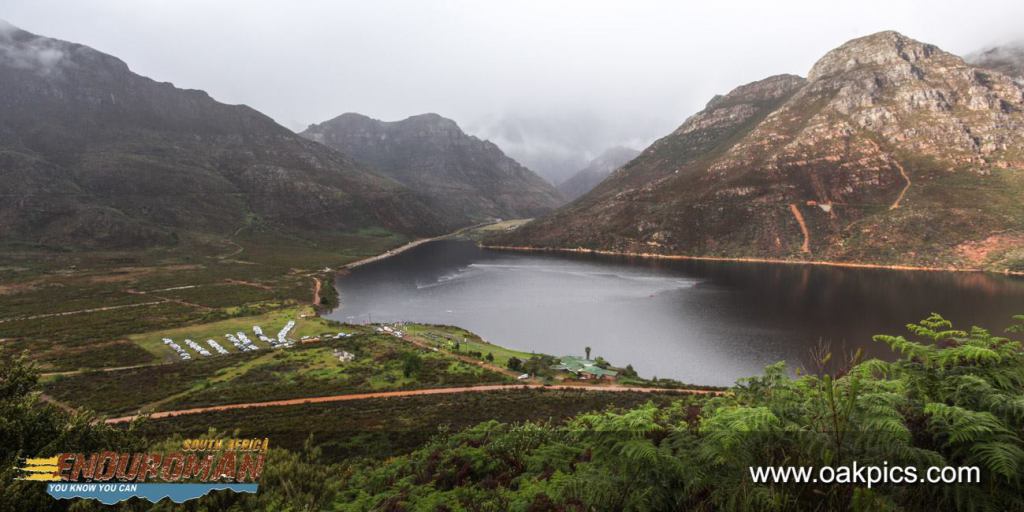 At the top of the climb was a long singletrack along a contour around the dam. I was fortunate in that no one caught me on this section. As a strong swimmer and “weaker” MTBer I always stress about having to let better riders through. 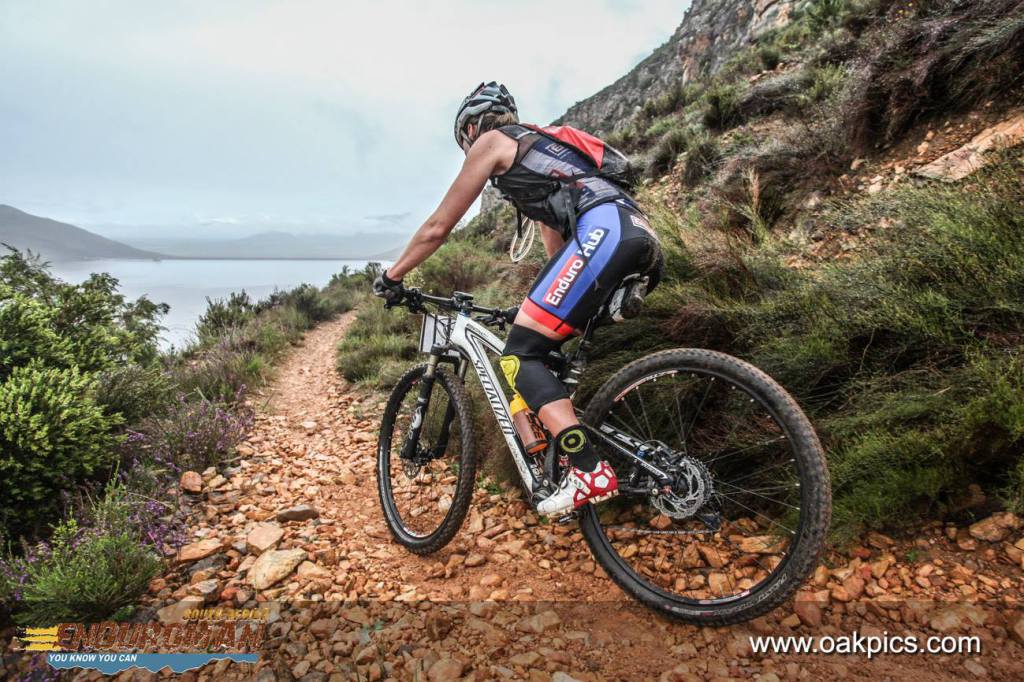 The first 20km to the first waterpoint was fairly uneventful aside from me checking the depth of a huge boggy pit with my shoulder, but I could feel that the cleat on my right shoe was coming loose. This has kind of always happened to a small degree, but has never been serious – I normally just tighten the screws every two weeks or so. But I did know that it was an issue and so I replaced the metal plate that the cleat screws into thinking this would fix the problem.

Alas, if anything is going to go wrong it is going to go horribly wrong on race day. So shortly after the first water point the screw came out entirely and the cleat was stuck in the pedal as I could no longer twist my shoe and cleat together. This made portages (and falls) (and there were a number of both) incredibly interesting as I had to take my foot out of the shoe to get off my bike. 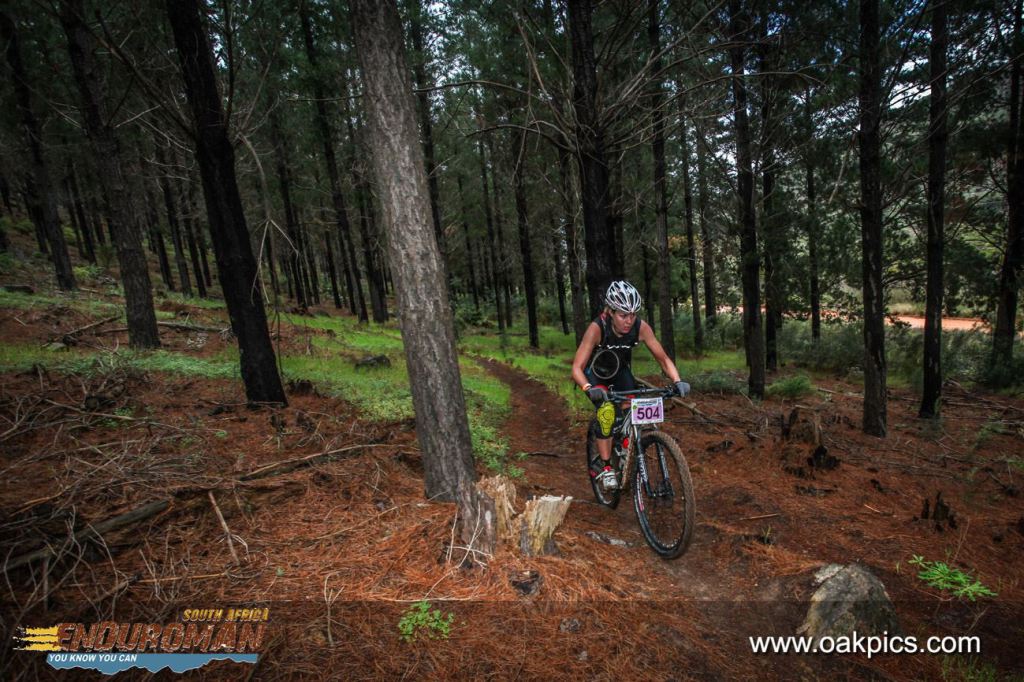 And I’ll quickly summarise the rest of the bike: I lead until 43km when Hanlie Booyens sped past me. This should probably have told me that I went too hard to start as I never thought I would have the lead for so long. I hit a huge low right at the start of the 3km forest climb and lost quite a bit of time from there on. I really just didn’t have the endurance (and could probably have paced myself a bit better). At the final water point my coach took a crow bar and got my shoe out of the pedal and a friend who was spectating gave me her shoe. Thanks Vera! I rode the final 15km a lot happier knowing that I could uncleat. 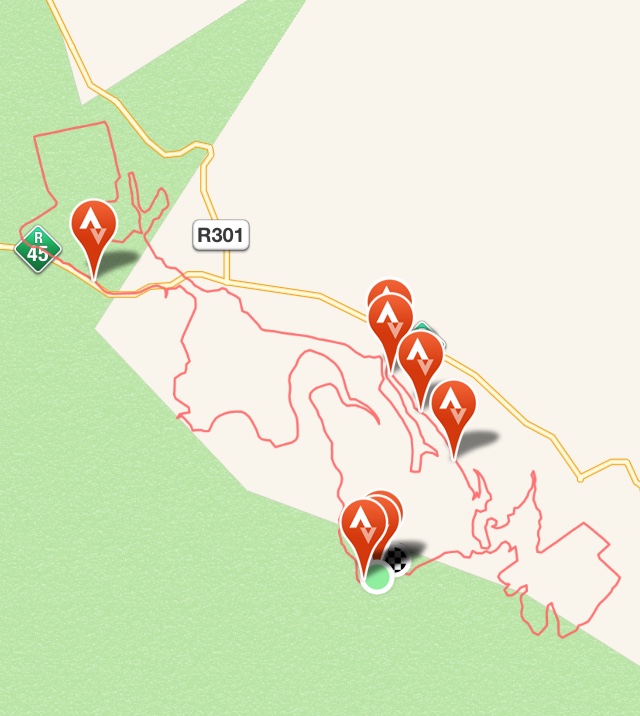 In transition I swapped my soggy socks for some fresh ones and headed out onto the run in 5th position. I was really happy to be off the bike and tackling the final leg. The run route was quite retarded, comprising a stupid climb at the start of each of the 3 laps that wasn’t runable (at least not for me and 98% of the competitors). The rest of the route was a bit of an uphill drag along a contour, a rocky descent and then zig-zagging through vineyards and up draining, sandy pieces between them. There was no rhythm to be had and was more of a slog than a run. A 21km slog. 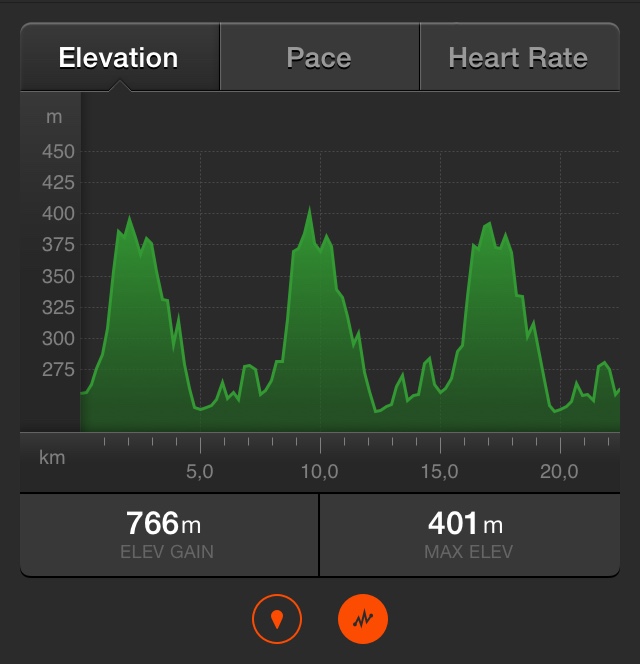 I started feeling not so lekker towards the end of the second lap. 2km into the second lap I really wasn’t feeling well and was struggling to keep moving. I stopped and did two whole body gag/throw up things and then felt like a million bucks and stormed (at this point in the race moving forward was deemed “storming”) home. 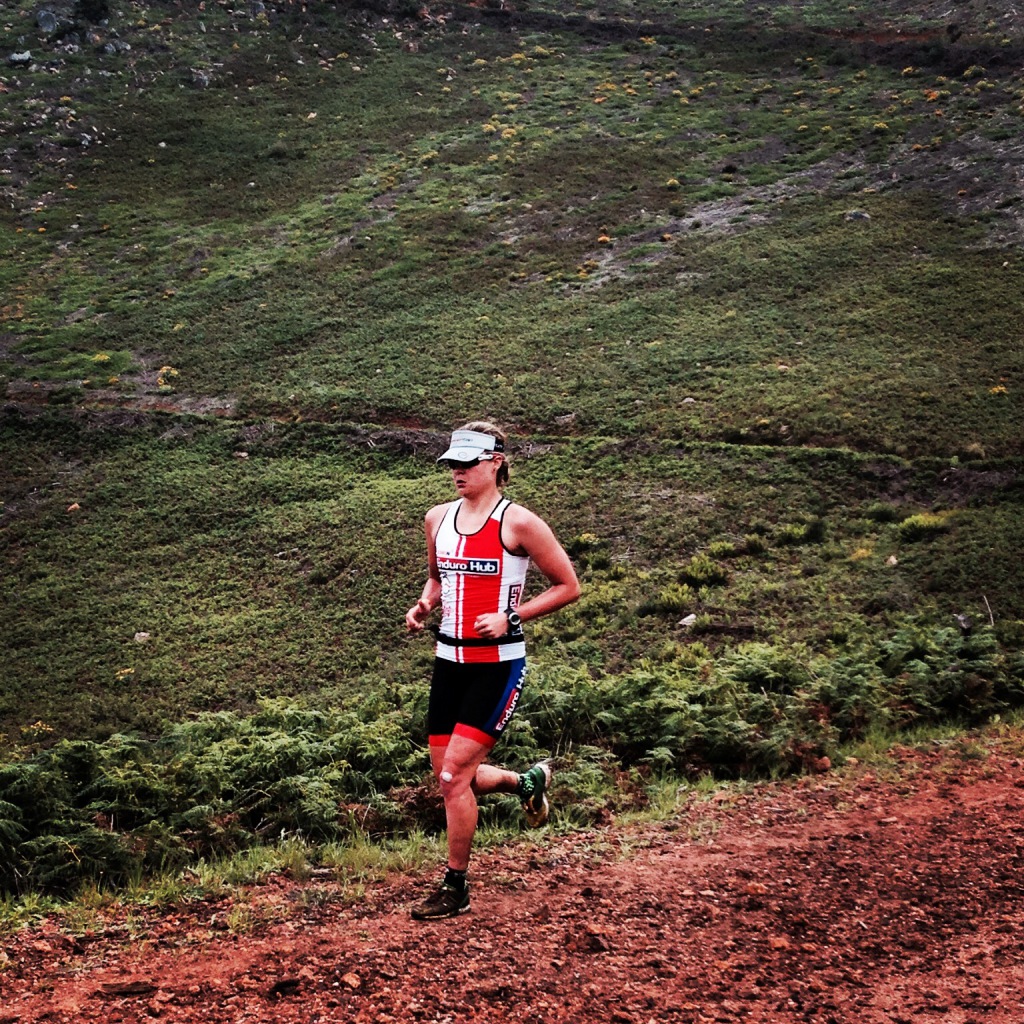 I crossed the line and my first overwhelming feeling was that of relief. And then came the hunger. I suddenly realised I was ravenous and my dad rose to the occasion and dashed off to find real food (I was so sick of bars and gels). He arrived back with two mini pulled pork burgers which I attacked while sitting on the grass just past the finish line. That meal definitely ranks up there in my top 5 all-time best meals!

I finished in 7h46 which was enough for 6th place overall and 3rd in my age category. I am super keen to come back next year, knowing what I am in for, and do it a whole lot better.

Massive congrats to all those who tackled and conquered Enduroman! It was no mean feat!

This inaugural race was absolutely fantastic and I believe that it will go from strength to strength in the coming years. Well done to Glyn Bloomberg and co.

A huge thanks must go to all those who are involved in getting me to the start line:

Oh, and I just turned a quarter century old. Here’s to the next 25! Scary stuff!

Birthday included bikes, friends, coffee and good food. As all good birthdays should

Until I race again! 🙂