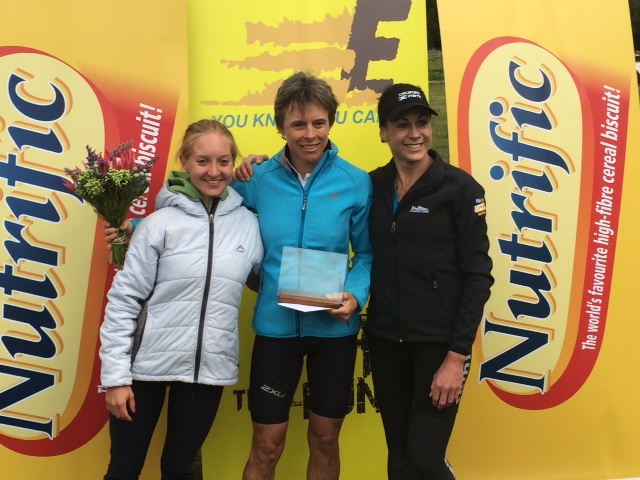 As the day dawned for the inaugural Enduroman SA, the first official utra-distance off-road triathlon of its kind in South Africa, few athletes had a true knowledge of what to expect. A 2.5 Km swim, followed by an 80 Km mountain bike ride and a 21 Km run, surely would have a severely different effect on the body than the same distances on road. Every meter, on bike or on foot, could present an element of danger. Focus and caution were to be the keywords.

Franschhoek offered a chilly, drizzly, but awesome day. The negative anticipation for sub-zero water temperatures at the Berg River Dam made the 15 degrees water felt like a sauna to many, but some swimmers, who swam up to 1hr40 for the 2,5 km, sustained severe body temperature drops, leaving them barely able to fasten their helmets after the swim. The Berg River Dam was covered by an enormous rainbow, which added to the splendour of the day. Two loops of 1.25 Km would always be great, offering a chance to draw some energy from the crowds, and to gauge the pace for lap 2. The water was silky smooth and super flat, a swimmer’s dream. Theo Blignaut and Robyn Williams lead the male and female categories out of the water. After stepping lightly over some submerged ankle twisting rocks, it was onto the bikes and getting the head ready to manage 80 arduous kilometres of mountain biking.

After a steep-ish rocky climb, the single-track bike route traversed the mountain side overlooking the beautiful damn. Sightseeing was low on the agenda, as the rains left the track quite water logged and choosing the right line was vital. With more or less 4 hours of biking ahead, technical issues, especially the dreaded chain-suck, had to be managed carefully. Some dense “handlebar-grabbing” overgrowth also had to be negotiated to prevent a crash or two. After 8 km the track dropped steeply to flatten out at 10 km. From then on the aerobic fitness, more than tech skills was the requirement to for good progress. At this time all signs of rain disappeared and every athlete could put the hammer down as best possible. Apart from one or two short climbs, the real kicker was waiting at Km 48. A leg draining 4 Km climb gave those with good legs the chance to break away, and for those who thought they had good legs, to break themselves. The best option would have been so ride it out with a steady rythm, since the run was getting very close! The course then dropped down for 6 Km, leaving only 12 flat-ish kilometers to navigate back to the welcoming sight of T2 at the beautiful La Roche Wine Estate, where the running shoes were waiting. Stuart Marais did a blisteringly fast bike leg of 3:15 to set him up for an overall win, bar any freaky thing to happen. As expected, Hanlie Booyens, with her tough-as-nails mental ability, out-cycled the ladies to force down a massive buffer.

The awesome vibe at La Roche surely lifted the spirits, but only 500 meters into the 7 Km lap, the dreaded “Wall” was waiting: a 250 meter climb forcing you down on all fours. As with all first laps, all was feeling good. After reaching maximum elevation at 1.65 Km, the joyful 2.85 Km descent was a gift from heaven, with a flat section to complete the lap. Scaling the “Wall” for the second time, athletes were starting to feel tested for real! Halfway into lap 2, the bodily strength was mostly gone, and mental strength became the main requirement. Raynard Tissink, fresh from a 2nd place at the Table Mountain Challenge two weeks back, ran a superb fastest time of 1:44:52, but Stuart had an unassailable lead and crossed the finish line first in a time of 5:41:44. To put it into perfective in regards to effort: James Cunnama’s winning time at Ironman 70.3 this year was 4:05. So, it could be assumed that Enduroman pushed the endurance levels somewhat higher! Hanlie Booyens also maintained her lead and was first lady home. 2nd and 3rd men and ladies were Raynard Tissink and Antoinne van Heerden, and Marilyn Fischer with Natia van Heerden in 3rd, adding another trophy to the van Heerden family.

Enduroman SA added a new dimension to the endurance sports agenda in South Africa with a very successful inaugural race. The flow of the bike and run course was good, and the podium ceremonies prompt and well executed, keeping the dynamics up and flowing as well. The balance between fitness and technical ability required for this race were within reach of most athletes. Next year’s race will without a doubt attract a massive amount of athletes. R10 000 for 1st place surely makes it a great pay-day for the winners! Setting up an event of this magnitude takes a lot of skill and yes, endurance. Glyn Bloomberg and everyone that made this possible can be applauded.

Upwards and onwards to Enduroman SA 2015!