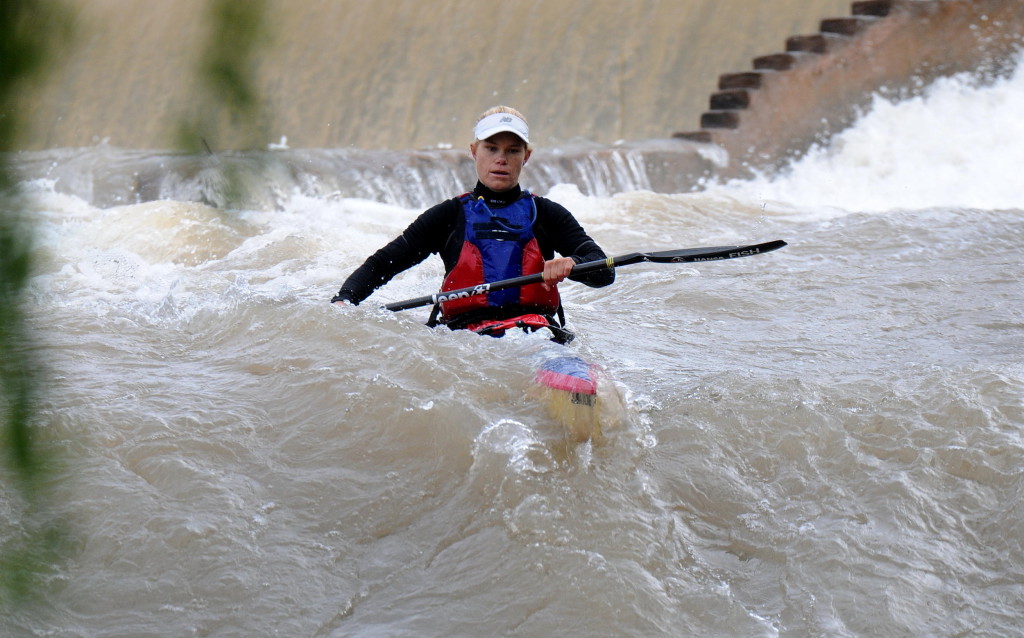 Cradock – The women’s title race of the 2014 Hansa Fish River Canoe Marathon received an exciting shake-up upon the recently confirmation that defending champ and former Eastern Cape local Michéle Eray will in fact be making the trip out from her new base in Oklahoma City, USA for the 33rd edition of the race which takes place on Friday 10 and Saturday 11 October.

Having moved to Oklahoma City in August last year, many assumed the 2012 K1 race winner would focus her full attention on the 2014 ICF Canoe Marathon World Championships to be hosted in her new hometown just two weeks before this year’s Fish.

The former Plettenberg Bay resident was however quick to dispel any misconceptions, despite acknowledging she may not quite be in peak form currently.

“I certainly am coming out for the Fish!” chuckled Eray. “I’ve bought my air-ticket already as I just can’t miss the Fish!

“Last year I sat over here (USA) and watched the race via Twitter and I said to myself that if I was still based over here in the US come 2014, then there would be no way that I wouldn’t be on the Fish’s start line!

Down a touch from where she’d like to be due to constraints her new fulltime position as USA Canoe/Kayak’s High Performance Manager has put on her training schedule, the 33 year-old is still excited by the opportunity to defend her title this year’s race represents.

“With the Fish being an Eastern Cape race it’s just so special to me to do well in it so I’ll try my hardest to defend my title, that’s for sure!

“I’m just in a very different position now to what I was two years ago – two years older and having spent a lot less time in the boat unfortunately.

“I really love a good race though and if I’m there on the start line – whatever the event – I’ll definitely give it my 100%, whatever that 100% might be!” said Eray.

A lengthy period away from the challenges of river marathons may also provide tricky challenges Eray will need to overcome should she reign victorious in Cradock once more.

“There are some small little rivers over hear but we don’t really have the equipment to take down those, yet, so it’s been pretty much just flat water paddling for me since I came over to the US.

“It’s been two years since my last Fish and, other than last year’s Swartland which I did just before I flew to the US, that was the last time I’ve been on flowing water.

“Hopefully I won’t be reacquainting myself with the crayfish at the bottom of the weirs though!” laughed Eray having had a couple of issues at the various weirs on the Hansa Fish route in the past.

While her form may be debatable, one thing for certain is Eray’s unwavering enthusiasm ahead of being a part of the action once again in 2014.

“The Fish is one of those races that is so awesome that you just don’t want to miss out on. It’s got everything. It’s the perfect race!

“As a race per say it has a little bit of everything and is really well balanced. There are rapids, flatwater, portaging and weirs plus everyone has to travel so the playing fields are really level.

“To race on the same 25 cumecs every year means everything is also so consistent year after year and a very fair race in that sense too.

“Then of course there’s also the whole Fish party, the two nights of live bands, the way the little town of Cradock swells up for the weekend as so many people arrive from all over the country for the race.

“For me personally, the Fish is also a fantastic excuse to come home and visit friends and family.

“With it fast becoming the most popular race in the country and it being so central for everyone, you kind of know that pretty much everyone from the paddling world will be there so I’ll hopefully get to see as many people as I can down there too.

“It pretty much is the perfect all-round paddling package and for me, best highlights how much fun river paddling is!” said Eray.

The two week gap between Marathon World Champs and the Hansa Fish this year, compared to the usual one week gap previously, has been welcomed by all title contenders and Eray is no different.

“The fact that Marathon Worlds is now two weeks before the Fish this year is huge!” described Eray.

“The one week gap made things just so tough and as South Africans, you usually race the singles on the Saturday as well as doubles on the Sunday at Worlds so you wake up on that Monday morning with every muscle in your body hurting. Then you’ve still got two ten hour flights to get through which is very counter-productive for one’s recovery.

“By the time you touch down in South Africa it’s Tuesday already, if you’re lucky, and then you have one day to get to grips with things again, one day to trip the river on the Thursday before bang, you’re racing again!

“So two weeks between the two is the perfect mix because now you have enough time to recover from Worlds before Fish, yet the two events are close enough that you can work of one peak physiologically.”

While the distinct American twang may not be heard much during this year’s K1 championship, apart from the odd word or two that may role off Eray’s tongue every now and then, the former eastern Caper’s close ties with the event may soon see the proud nation represented at the ever-popular event.

“I’ve got a bunch of people in the US raring to go, especially come next year’s K2 race,” confirmed Eray.

“For them it’s also not only about them taking an ICF boat down a two meter weir – which in itself is quite something – but it’s the whole package. They get to do some awesome paddling and they get to see a bit of South Africa – and the Karoo is just so unique and so beautiful,” she added.