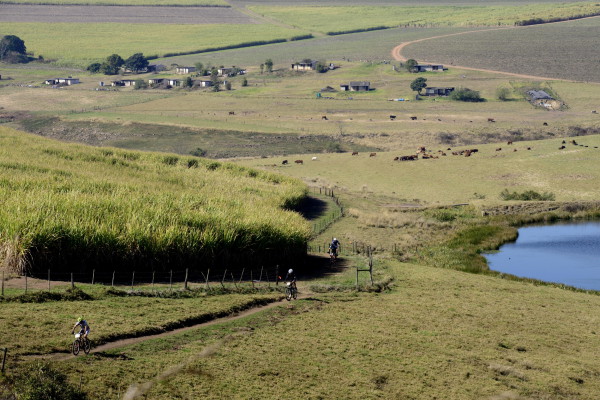 Participants of Sunday 2 August’s 2015 Illovo Eston MTB Challenge can look forward to spectacular views and pristine trails, all the while contributing towards the host venue – the Eston Club – and the local community. Anthony Grote/ Gameplan Media

Eston – The 2015 Illovo Eston MTB Challenge that takes place this Sunday, 2 August, will not only afford riders another golden opportunity to enjoy the pristine trails and spectacular scenery of the region but the day of outdoor adventure also serves as a vital financial contributor to the Eston Club, Eston Primary School and the surrounding community.

“The Illovo Eston MTB Challenge is the Eston Club’s single biggest fundraiser of the year and without it we may well not even have a club!” confirmed Roger de Billot, long-time servant of both the race and club committees.

The versatile venue caters for a variety of sports including cricket, squash and tennis, houses a popular gun club and kettlebell classes, hosts numerous meetings and small conferences and is an important social hub for the local community as well.

“The club is the core of our community in Eston and it is just unbelievable how everybody pulls together and gets involved when there is a big event, especially one the size of the Illovo Eston MTB Challenge!” said De Billot.

“Not only does the club provide the venue for the race village, parking etc. but our members also get very hands on and take care of the catering for the VIP brunch, running the bar, marshalling out on route; their input is endless!

Having started with just a couple of hundred participants, the MTB spectacle has grown into one of the province’s annual mountain biking majors with the profits ploughed straight back into the facility and the community alike.

“The race was first started over a decade ago and is now a massive event that attracts thousands of riders each year!

“All the money that the event brings in is put towards the maintenance and development of the club while the Eston Primary School also benefits from the event as well,” explained De Billot.

“We are extremely lucky to have seen the event grow as it has over the years and to now be able to sustain such healthy numbers I believe is a testament to the location of the event – being halfway between Pietermaritzburg and Durban, the awesome venue that the Eston Club provides and all four race routes are great, manageable rides!” he added.