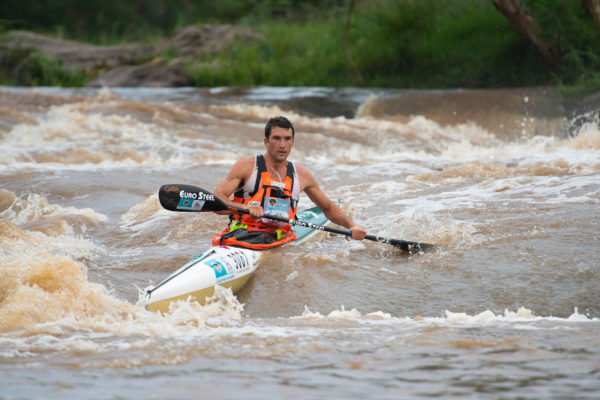 Nine-time champion of the Dusi Canoe Marathon Andy Birkett has been supported by Euro Steel as has the race for a number of years and once again the steel company has recommitted themselves to the 2020 Dusi Canoe Marathon from 27-29 February.
Anthony Grote/Gameplan Media

Pietermaritzburg – Following years of support for the sport of canoeing, through their team of elite athletes, and the Dusi Canoe Marathon, Euro Steel have reassured Natal Canoe Club of their commitment to South Africa’s most iconic canoe marathon from 27-29 February 2020.

Following the recent chemical spill into the Baynespruit from the Willowton site, the state of river system’s in KwaZulu-Natal has come under the spotlight even further and through some proactive work Euro Steel have decided to make a difference.

“The major issue facing us right now is water quality,” said Doug Gow, the newly elected Chairman of NCC.
“The partnership with Euro Steel, who have invested in the Save Our Rivers campaign, will ensure direct action is taken on the issues the Msunduzi and uMngeni Rivers currently face.”

Euro Steel support Save our Rivers which has four different action points on the river covering; sewerage blockage monitoring in Pietermaritzburg, water testing of the uMngeni, a plastic and nappy pick-up team and a water-hyacinth-to-fuel plant at Pumphouse Weir.

These teams operate daily to ensure a better quality river system for paddlers but more importantly, will improve the quality of potable water for both the for the communities residing alone the river banks as well as the greater Durban Metro area.

Colin Wilson, CEO of Euro Steel and a Dusi age category winner, has embraced the opportunity to invest in the community beyond the paddlers themselves.

“Our paddling team have provided exceptional results over the years, and continue to do so,” he said. “This extension of our involvement towards ensuring good water for all is testament to our philosophy of partnering with people.

“As rivers are the life blood of our country, it is incumbent on us to expand on these activities on a national basis going forward. The lack of clean water is becoming critical.

“We will start this process organically and expand where possible.”

Newly appointed Dusi Chairman, Shane Le Breton, added that the initiatives brought forward by Euro Steel have resulted in some exciting developments which will add huge value to the race; and excite some older paddlers who may have thought the paddling challenge had lost its appeal.

“We’ll be announcing these changes in the weeks building up to the race and are sure that the focus on participant safety, spectator enjoyment and family involvement will be well received.

“Taking dynamic activations from various sports and bringing them into the Dusi mix, we hope, will ensure that paddlers and supporters will see an active, positive shift in the event.”

“Paddlers look for good water and the water system is currently at some of the most exciting levels in nine years. We would encourage entries as soon as possible so that we can put all our plans in place to make it a memorable experience.”

Entries to the Dusi are flowing into the NCC offices following the successful hosting of the Ozzie Gladwin canoe marathon which showed a significant growth for the first time since the national drought. This event plays a major role in determining the ultimate seeding of the top paddlers for the Dusi.

International paddlers are being attracted to the three day challenge from Pietermaritzburg to Durban, with the Irish duo of Donnach Brennan and Tadhg de Barra confirmed to be part of the race. Position holders in Ireland’s most prolific river marathon the Liffey Descent, they arrive on South African soil with known pedigree.

Race entries are open and can be done through the website www.dusi.co.za.