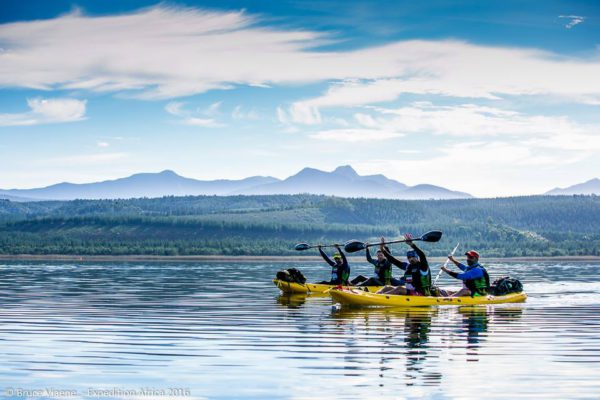 The countdown to Expedition Africa 2017 has officially begun, as teams of two and four prepare for the 500km expedition through the Eastern Cape’s notorious Adventure Province. Cape St Francis Resort have preparations in full swing to host this year’s World Series event, as teams from all over the globe prepare to arrive in May.

The team officially came together mid-February this year, featuring Ryan Van Niekerk, Nici Van Niekerk, Leon Pieters and new-comer Gina Malherbe who are in training for the event coming up. According to Malherbe; It is hard to juggle life and training for an event this large, but as their team is faced with limited time left until the event, it is much easier to be more focused. “I have a couple of new disciplines to learn very quickly, which in turn adds to the adventure of the sport” further expresses Gina Malherbe.

According to route designer, Stephan Muller; teams can look forward to experiencing all the challenging, yet beautiful attractions this glorious area has to offer. Magnificent mountain ranges and beautiful coastlines will provide the perfect playground for teams to endure 500km’s of trekking, kayaking, cycling, abseiling and all the other adventures this race has to offer.

“Having Expedition Africa take place in an area that is so close to my heart is a once in a life time opportunity. This will be my first adventure racing experience, which makes me extremely excited and nervous at the same time” shares Malherbe.

Teams can look forward to exploring the beautiful Kouga and Baviaans regions , including the highlight of this year’s course; the Baviaanskloof Wilderness Area. This is a UNESCO World Heritage Site, and the largest of its kind in Southern Africa. The 225 000 HA mega-reserve boasts unspoiled, rugged mountainous terrain featuring spectacular landscapes will expose teams from far and wide to an entirely new kind of beauty.

Organisers; Stephan and Heidi Muller have implemented a “Dark Zone” for the first time in the history of Expedition Africa. A “Dark Zone” will be featured along one of the hiking legs, as teams will not be allowed to travel during night. This is to ensure the safety of the teams as they will traverse though an African Wildlife area.

The Cape St Francis Resort will host the event from 12 to 21 May 2017. The staff of the resort are excited to host the event, and provide an opportunity for athletes to truly experience a wilderness where few have set foot.

With many local teams entered into the event, the multiple supporter transitions will enhance the camaraderie and ensure ongoing excitement travels throughout the Kouga and Baviaans. The organisers are confident that locals will have the chance to meet teams along the course of the race. “By following the teams vie the online live tracking sites, our locals will be ready to support the many teams from their shops and restaurants as they pass by,” shares Esti Stewart.

Get in touch with the organisers! https://www.facebook.com/profile.php?id=273266142720354&fref=ts or simply visit http://www.kinetic-events.co.za/Adventure-Races/Expedition-Africa for constant updates of videos and other interesting information.