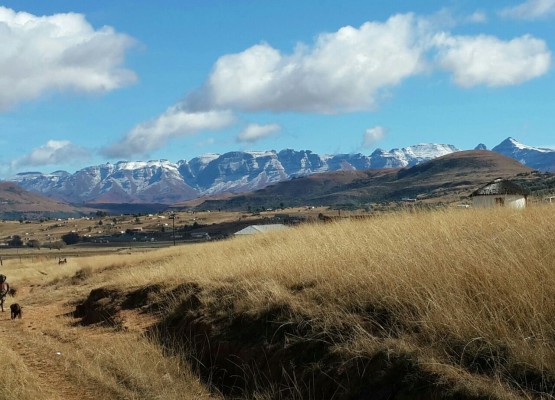 RMB Change a Life MTB Academy founder and keen adventurer, Martin Dreyer was in awe of the incredible vistas he was greeted by throughout his record-breaking Ride to Rhodes journey this weekend as he remained sleepless throughout his conquering of the self-navigated, non-stop, 575km mountain bike event from Pietermaritzburg to the Eastern Cape town of Rhodes. Supplied/
Gameplan Media

Pietermaritzburg – Irrepressible adventure racer Martin Dreyer stunned the mountain biking fraternity this weekend when he became the first person ever to officially complete the treacherous 575km Ride to Rhodes race from Pietermaritzburg to Rhodes in the Eastern Cape in less than 50 hours, battling cold and snow, fatigue and sleep deprivation, to shatter the previous record by more than a day.

The heroic solo charge triggered a flood of online support for the adventure junkie and founder of the RMB Change a Life MTB Academy, as he achieved the feat early on Monday morning.

The Ride to Rhodes – a non-stop, self-supported sub-event of the 2300km Freedom Challenge’s Maritzburg to Wellington ‘Race Across South Africa’ – requires participants to complete the gruelling mountain bike task in a maximum of six days with support stations every 80-100km their only reprieve from both the elements and fatigue.

For Dreyer though, the potential of not only completing the tall order but also breaking the event’s time record of nigh on three and a half days brought heightened appeal and kept the ‘Dusi Duke’ pushing through the numerous challenges of his remarkable feat, during which he remained sleepless throughout.

“This is a personal journey; there is no winner and you don’t take part for bells and whistles at the finish line. For me it was all about pushing myself and testing my boundaries and I did that so I’m very chuffed,” explained an exhausted yet satisfied Dreyer.

“I’m pleased all went well and my body and mind’s limits were tested and I’m relieved both held out for the duration of the challenge while breaking the record is also great, even though I’d hope to break the two day (48 hour) mark.

“I loved it and it was everything I’d hoped it would be and more!” he added.

Despite feeling nauseas shortly after starting on Saturday morning and unable to eat much for the first quarter of the journey, Dreyer charged through the Ntsikeni Lodge station shortly after 21h00.

“We started in rain and a gale force wind on Saturday and the headwind for the first 100km was just soul destroying.

“It meant I exerted myself too much early on and so I couldn’t eat anything at the Allendale stop but fortunately I felt a bit better later on.

“Having had to cross the Umkomaas River, my feet felt like ice blocks by the time I got to Ntsikeni though and a big thanks to Mr Ngcobo for the buckets of hot water and incredible hospitality!”

After making it to Masakala by sunrise on Sunday morning, the 47 year-old hoped to start his charge through to Vuvu and beyond before nightfall however the wintery conditions and early sunset put pay to that as Dreyer arrived at the stop at 21h30 on Sunday night.

With his record-breaking goal firmly in his mind, Dreyer was faced with the daunting task of tackling the ultimate challenge of the event – hiking up the notorious Lehanas Pass – in darkness and sub-zero conditions.

As he hiked up to the ridgeline of Lehanas, Dreyer stumbled on a shepherd’s hut he hadn’t seen before, throwing him off course.

“So cold and can’t see a thing. Going to have to back track,” Dreyer posted on a supporters’ WhatsApp group at 02h20 on Monday morning. “Flip, I have lost my bearings. Really struggling to find my way – pitch black, freezing cold and cloud cover – complete disorientation.”

Believing he was lost in the mountains, Dreyer took the difficult decision to let go of the time goals he’d set himself and take cover for the night, waiting for sunrise to continue his journey.

“I’d settled down when I thought ‘No, get back out there!’” said Dreyer. “I went back out, took the tiger line to the top and used the fence line as a hand rail down to the road.”

“Earlier I’d actually been right where I wanted to be but my complete disorientation meant that for two hours I had no idea of my whereabouts – the two hours that cost me going under 48 hours in the end.”

Despite the tough climb behind him and a downhill stretch to the finish, the challenges kept coming for Dreyer as he desperately sought the finish line at the Eastern Cape town of Rhodes.

“The snow wasn’t a problem because that at least offered some traction but there were patches that the sun didn’t often get to and were very icy and slippery.

“Even though it was an effortless, energy-saving free ride down due to gravity, I had to be very careful and go very slowly.

“By then, having not slept at all since Saturday morning, I was also completely exhausted and twice found myself falling asleep on the bike – once I hit a rock and woke up just before I reached the edge of the road and the cliff below!

“I decided for my own safety I’d have to walk and I kept shouting and singing to myself to stay awake.

“When I eventually made it to Rhodes, I was filled by sheer relief!”

The renowned adventurer, who during his paddling days won seven Dusi Canoe Marathon and seven Non-Stop Dusi titles and has also successfully completed the Freedom Challenge proper three times, completed the task in 49 hours and 47 minutes.

Dreyer, coach and mentor of a crop of talented paddling, mountain biking and running athletes from the Valley of a Thousand Hills through his RMB Change a Life MTB Academy, was inundated with messages of support along the way while ‘legend’, ‘inspirational’, ‘monumental’ and ‘champion’ were used by many in their post-race congratulations.

“Mart, what an example you set, not only for us as individual sportsmen and women, but for your mentees (as well),” commented Rand Merchant Bank (RMB)’s Maureen Gleeson. “Salute from RMB!”

“Unbelievable what you have achieved!,” added Ursula du Plooy, Executive Director of Computershare, sponsors of Dreyer’s paddling arm of his Change a Life Academy. “What a privilege to have you as our Change a Life ambassador.”

More information is available at www.freedomchallenge.org.za.