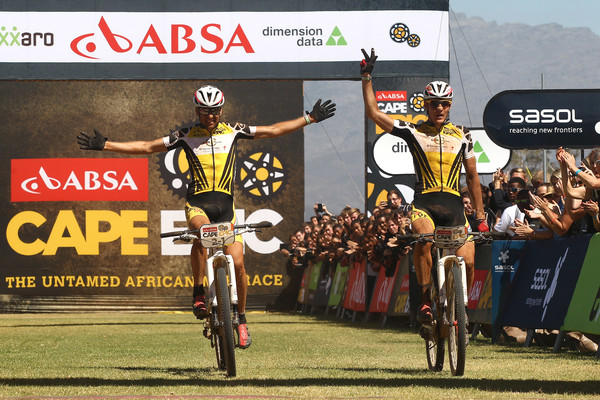 It was the longest stage of the 2015 Absa Cape Epic and one of the toughest, but the 128km slog on Wednesday through alternating sections of thick sand and rocks was illuminated by one extraordinary performance.

Arianke Kleinhans and Annika Langvad (RECM Specialized) had gone to bed on Tuesday night in the knowledge that their lead of more than half an hour had been turned into a 27-minute deficit after the race commissaire added one hour, 13 minutes and 39 seconds to their time for taking an inadvertent shortcut on Stage 2.

Everybody – themselves included – expected them to take two or three stages to haul it back. Instead, they did it in one day and are back at the head of the Sasol Women’s category.

Immediately after crossing the line at HTS Drostdy in Worcester, Kleinhand and Langvad collapsed in exhaustion and elation. The ride – blitz in their case – from Elgin to Worcester had been an emotional rollercoaster.

Moments later, Kleinhans was in tears as a close friend offered his congratulations. The time penalty from Stage 2 had been wiped out by an incredible day in the saddle on a course that left many of the riders dreaming of the lush surrounds in the hills and valleys of Elgin.

Langvad, cool as a Copenhagen snowman despite the 30-degree temperature on the windswept high school field, was as composed as ever. “We were very motivated when we started this morning,” she said. “We needed to put ourselves on to another level, and we did that.”

So potent was Team RECM Specialized on Stage 3 that they now go into Stage 4 with a nine-minute overall lead over Jennie Stenerhag and Robyn de Groot of Team Ascendis Health.

A transition stage on the Absa Cape Epic – from one race village host town to another – is sometimes regarded as being easier, but Wednesday’s ride from the Elgin Valley to Worcester was “very rough and really sandy”, according to overall race leader Christoph Sauser.

Riders further back in the field also spent several hours battling in baking heat as the temperature steadily ticked up towards the 30ºC mark.

Swiss Sauser and his Czech partner Jaroslav Kulhavy (Investec-Songo-Specialized) were again imperious at the front of the field, powering away on the last 15km to register a 25 second win and extend their overall lead to more than seven minutes. It was their third stage win in succession and Sauser looks increasingly likely to become the first person to win the event five times.

A dust-caked Kristian Hynek of the Czech Republic, said the difference in this year’s race compared to last year, was that “Jaro is a game changer”.

The Topeak Ergon pair moved up into second position overall as the Bulls – four time winner Karl Platt of Germany and Switzerland’s Urs Huber – dropped from second to fourth after some bad luck. Platt had punctured badly and ended up riding on his rim to the tech zone and a spare wheel.

Multivan Merida’s Jose Hermida of Spain and Rudi van Houts of the Netherlands also moved past the Bulls into the top three.

It turned out not to be a good day on the bike for the first-time Cape Epic pairing of Stenerhag and De Groot as they finished sixth among the women on the stage, 36 minutes and 25 seconds off the lead. Stenerhag and De Groot have been riding well all week, but there were suggestions from out on the course that the latter might have been ill, with the rider herself admitting at the finish that she felt “flat” on the day.

“We’re very happy to be up in second place for the stage,” said Dahle Flesja. “This is where the racing is and for the first time in the Cape Epic we felt like we were in the race. It was a long, sandy day and some places it felt like we weren’t moving at all.”

Stirnemann has been struggling with illness all week, but it looks like the pair are cranking up the pace. “We didn’t push too hard today, but we got into it eventually,” said Dahle Flesja. 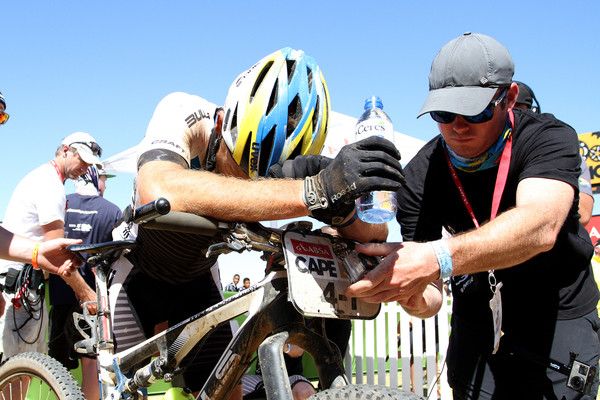 An exhaustd Karl Platt of the Bulls after finishing stage 3 during stage 3 of the 2015 Absa Cape Epic Mountain Bike stage race held from Oak Valley Wine Estate in Elgin to HTS Drostdy in Worcester, South Africa on the 18 March 2015 – Photo by Shaun Roy/Cape Epic/SPORTZPICS

The Dimension Data Masters category is turning out to be a fascinating battle, with Dorma/Robert Daniel’s South African pairing of Robert Sim and Nico Pfitzenmaier winning their second stage in a row. Their 12-second win closed the gap on category leaders Bart Brentjens of the Netherlands and Abraao Azevedo of Brazil (BETCH.nl-Superior) to under two minutres.

“It was a good day for us,” said Sim. It is a real ding-dong-battle at the moment between us and Bart and Abraao.”

The race for the Exxaro jersey has swung convincingly towards Phillimon Sebona and Jan Motshioa (Exxaro PWC) in the past two stages after pre-race favourites Sipho Madolo and Azukile Simayile (Investec-Songo-Specialized 2) dropped back sharply. They had another bad day yesterday and Exxaro/RMB’s Lucky Mlangeni and Tshepo Tlkou slipped past them into second overall in the race for the jersey.