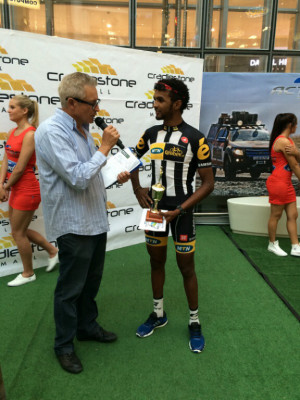 The Eritrean climber made short work of the undulating 102km route to win the West Rand’s biggest cycle race in a time of 2:25:16.

He was followed across the finish line at Cradlestone Mall by teammate Stefan de Bod in 2:25:22, with EuropcarSA’s Willie Smit just a second back.

Eager to test their form ahead of the national and continental road championships in the next two weeks, MTN-Qhubeka took control of the racing early on.

According to team manager JP van Zyl, the attacks started hard on the Hillsnacks climb, which loomed within the first 10km.

“That made a selection of around 35 riders and then we just kept up the pace and controlled the front from then on.”

With 40km to go, Van Zyl said his riders went on the attack again, playing out their tactics according to plan.

“We waited for the last 20 kilometres to attempt our getaway. Two riders from our team and two from EuropcarSA went up the road.”

On the final Valverde climb, Eyob and EuropcarSA’s Bradley Potgieter broke away, with Potgieter claiming the king of the mountains hotspot.

Sensing his opportunity, Eyob attacked his nearest rival and successfully dropped him to ride alone into the finish.

The 21-year-old, who is also the reigning Carnival City Classic winner, was happy to take his first Berge en Dale win.

In the women’s race, Time Freight’s Lise Olivier also took her chance in the closing kilometres to claim an uncontested victory in 2:46:27.

“A group of about five girls just stayed with the bunch we were riding in and went with all the moves,” said Olivier.

“I got away with about two kilometres to go – just turning onto the highway, there’s a little kick and I got lucky I guess.”

The 31-year-old Pretoria resident said she was looking forward to next week’s SA champs.

“I’ve got some decent form, so we’re in for some good racing.”