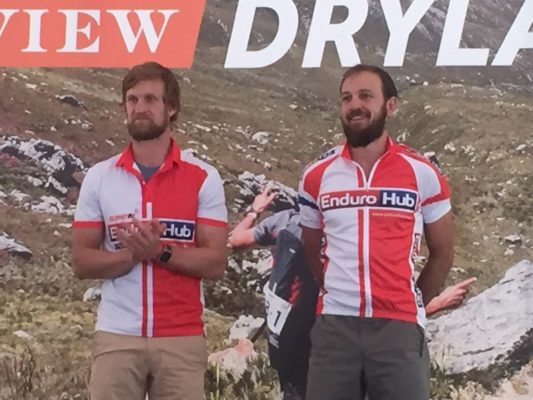 On Thursday 3 November 2016 my running partner (Niel Swanepoel) and I left Cape Town to go run a stage race in the Klein Karoo (Oudtshoorn, Western Cape). Our plan was to run, relax and enjoy some “down-time” with awesome people. I can honestly say the event met and exceeded all our expectations. From ancient caves to mountain tops, from single tracks to open roads, from competitive runners to best of friends… these are just some of the elements we’ve experienced at the Fairview Dryland Traverse 2016. 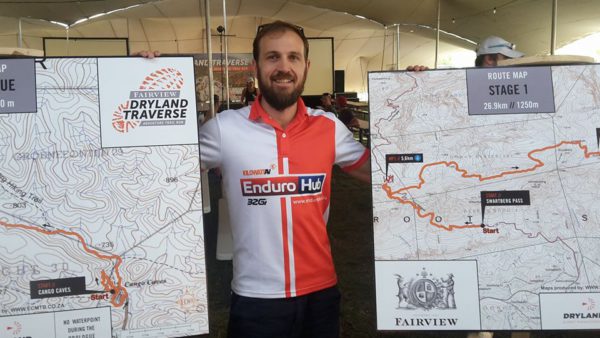 Morne Van Greunen making sure he knows his way around the routes for the Fairview Dryland Traverse.

After a lengthy journey (due to road works on the R62 route) we arrived at De Hoek Mountain Resort. The Resort is about 34km North of Oudtshoorn heading towards the Cango Caves. The Resort is quite and lends itself to an event of this nature due to the facilities and the beautiful surroundings and trails. Just a few minutes after we arrived we were done with registration & checked into our luxury tented accommodation. Shortly after we were sitting in the mini busses anxiously waiting to depart for the Prologue start at the world famous Cango Caves.

This is undoubtedly one of the most unique experiences you will ever encounter as a trail runner. Teams set-off one by one into the mouth of the cave like tiny little tadpoles being swallowed by a giant whale. The air in-side the cave is stuffy so your heart rate jumps instantly as runner’s zig-zag on the narrow paths in the cave. Once you exit the cave it’s a short fast downhill (on tar) before hitting the single track climb heading back towards De Hoek. We (Team Endurohub) had a nice solid run finishing 37min 12sec in 3rd place after the 8km TT. Job done. 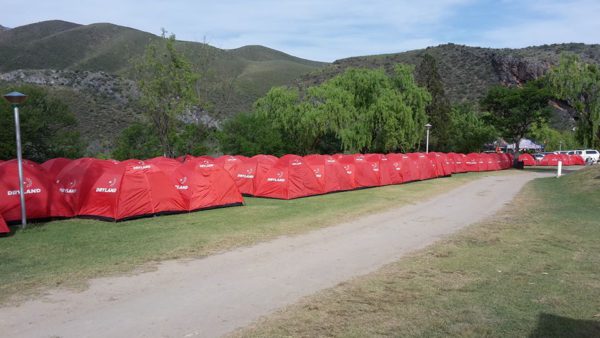 Home for the weekend.

Starting with a 5km climb up the Swartberg Mountain Pass it’s obvious why this is called the Queen stage of the race. Some of the solo (inexperienced) runners and the leading teams went out very fast, but we decided to start more conservatively. We formed a neat little group (see image below) who worked together to the top of the climb. As we climbed we slowly-but-surely caught the front runners and we were all back together as we reached the summit. At the top we entered a tricky little single track section that took us to the first of two (amazing) water points. The pace was fast, but manageable as we chased the second placed team Obey Mtetwa & Mvuyisi Gcogco (Raidlight/Free Spirit). After WP 1 my partner started taking strain and we had to work very hard up the climbs and started losing positions. Wolf Pack 1 team of Warren Dickson and Jade Muller had a great day out and they were running them-selves into a strong over-all podium position which they manage to defend to the end.

Our day went from bad to worse when Niel started cramping which made it very difficult to run the last 5km technical downhill section. Huge respect to Niel who suffered badly, but still hung in there and made it to finish line. Unfortunately we lost allot of time which meant the end of our GC hopes, but there was still two days / stages left and we had nothing to lose!

Stage 2 got underway from Rust en Vrede waterfall picnic site. Runners were exposed to the south-eastern parts of the Swartberg Mountains. We went out at our own pace and got into a nice rhythm early on. After WP 1 on the wall of the next gem, the Raubenheimer Dam, we ran into the secluded farming community of De Kombuys before reaching water point two at the home of the Cango Caves. By this stage we were firing on all cylinders. Working together as a unit we increased the pace and even caught the second placed team from Port Elizabeth Obey Mtetwa & Mvuyisi Gcogco (Raidlight/Free Spirit). The race was on for second place, but the guys from PE were too strong in the end and we had to settle for 3rd. This is undoubtedly one of my Top 10 runs of all time and again credit to Niel for coming back after yesterday’s disappointment. I absolutely loved every single kilometer!

If stage 1 is known as the Queen Stage then the Saturday night party must be the Queens Mother. It was was an absolute ripper! The beach party theme was embraced by all runners and crew as people were dressed in all sorts of costumes, surfing wear and even scuba gear. Every-body joined in on the fun and it was great to see elite athletes Christiaan & Landie Greyling having a jol on the dance floor. Fairview wine and Cape Brewing Company (CBC) beers were flowing… at high speed! Karel Bezuidenhout (event MC) was setting the pace and even fell in love… again. It was a brilliant evening that we will remember for a long time. Thanks guys!

Stage 4 “The Cherry on the cake”

OK so waking-up on last day after 3 days of running and a proper night of jolling is NOT the most pleasant experience, I’m not going to lie to you. Eventually we dragged our tired bodies out of the tent and headed for a dip in the pool just to wake ourselves up. The farewell stage started at 9am and was n fast-flowing route in and around our home base. We started conservatively being lead-out by the leading lady Danette Smit up the first climb. The pace increased and we were locked in a battle with the experienced Mauritz Jansen van Rensburg and JC Visser (Soul Running). The Soul Running duo was setting the pace as we headed back into De Hoek and onto the last single track climb. With about 1km to go Niel surged and we put in a last hard effort all the way to finish line to secure our second successive podium finish. Final GC results can be found on the website https://www.jumpertrax.com/1927/results

Lastly I just want to say thank you to Niel Swanepoel for an awesome couple of days running and to the Drylands crew and all the sponsors who made this event possible. The organization was world class. I take my hat-off to all the crew and will endorse this event for many years to come. Keep up the good work guys.

The race might be over, but the memories will definitely last a life-time!

Take it easy, but take it!

Having done countless multi stage races in SA, this was epic! So, if you’re looking for a stage race with a great atmosphere, challenging trails and very accommodating crew/organisers, then look no further than the Fairview Dryland Traverse.

Four Days of running the Klein Karoo, a lifetime of memories!

For all the results, images & more, visit www.drylandtraverse.co.za