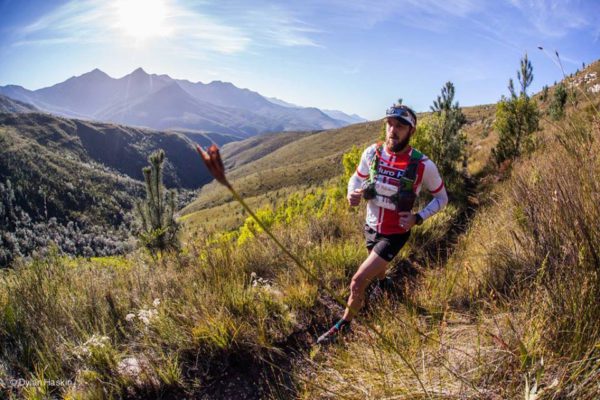 With just 10 days to go till the start of the Fairview Dryland Traverse 2016 that familiar feeling of excitement and anxiety is starting to build. I clearly remember my first Traverse adventure two years ago when I packed my little VW Polo and went on a solo mission feeling a like Indiana Jones heading for the great “un-known”. From Durbanville I took the N1 to the heart of the Klein Karoo. On my way there I (accidentally) drove through the majestic Seweweekspoort Pass in scorching heat & I almost thought my little Indiana Jones fantasy was going to end prematurely. Driving through Seweweekspoort is like driving on planet Mars (I imagine). The rock facings on either side of the road are very intimidating if you’re alone in a little 1.4 VW Polo. Eventually the pass spat me out on the other-side close to iconic Calitzdorp just a few kilometers away from De Hoek Mountain Resort outside Oudtshoorn. I knew it was going to be a special trip.

A Couple of hours after I arrived we lined-up at the entrance of the Cango Caves. One by one the runners set-off and then disappeared into the darkness almost instantly like a tiny fish being swallowed by a killer whale. Once you’re inside it literally feels like you are inside a video game. Characters running around with tiny head-lamps strapped to their foreheads bobbing up & down look like alien creatures chasing each other (very funny). The inside of the cave is obviously dark & slippery under-foot which adds to the chaos a.k.a FUN. You realy have to concentrate to avoid other runners and watch where you’re going. Then just as quickly the whale / cave spits you back out into the world & you are free to run run run. The Cango Cave section is only one of the features that differentiate Fairview Dryland Travers from other events. I love it.

Day 2 (stage 1; 27km) starts at the base of the Swartberg Pass. It’s a long climb, but the landscape is so spectacular that you almost forget about the effort you are putting in. This was my favorite day of the race and arguably one of my most enjoyable runs of my life. After the initial (5km) climb the middle section (15km) is open gravel roads and flowing single track that allows for fast running. The final 7km includes a technical single track decent towards the finish at De Hoek. I have to mention & thank Johnny Young as we pushed each other literally running stride for stride for the entire stage which ended in a sprint finish for 3rd. What an incredible day…

Day 3 (stage 2; 23km) my legs were shot. It turns-out the hard running and sprint finish with Mr Young on the previous day was a bad idea. Regardless even on tired legs running in this part of the world makes-up for all the pain. There is / were no major climbs (if I recall), but plenty of rolling hills which felt like climbs to me. The route snakes though farming communities & past the Raubenheimer Dam and finishes at base camp (De Hoek). Looking at the route profile for the 2016 event the stage will include new single track sections #yesplease! Click on below link for 2016 route profile :

Day 4 (stage 3; 11km) there were some bleak faces that turned up at the starting line after the legendary after party the night before. The race only starts at 9:30, which is very considerate by the organizers allowing an extra bit of “recovery time” for those guys & girls who went all-out at the bar & on the dance floor! The social aspect is realy what makes this such a special event. Stage 3 is short, but punchy and should not be under-estimated. This undulating trail consisting of loads of technical single track, short steep climbs, followed by gnarly descents makes for a challenging, but rewarding final stage to wrap-up a memorable event.

So with just 12 days to go till the start of the Fairview Dryland Travers 2016 I’m super excited to see what this year’s event will offer. I have no doubt that the Drylands crew will deliver another stellar event that ticks all the right boxes at a consumer / experiential level.

Thanks in advance to the team, the sponsors and all the participants for what promises to be a spectacular couple of days in the Klein Karoo.

For daily up-dates & to support Team Endurohub follow us on:

Take it easy, but take it!