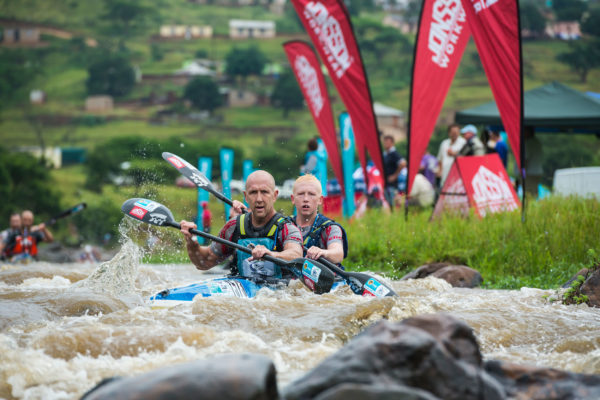 Johannesburg based Father and son pair of Michael (front) and Liam (back) Stewart will rekindle their partnership at the 2018 FNB Dusi Canoe Marathon from 15-17 February. Anthony Grote/
Gameplan Media

Pietermaritzburg – As many crews start their final preparations for the 2018 FNB Dusi Canoe Marathon from 15-17 February, the father-and-son pair of Michael and Liam Stewart will be hoping to replicate their impressive top 50 performance in 2016.

For father Michael, 2017 ended on a tough note after he tore his calf muscle on the final portage of the men’s 45-49 K1 showdown at the ICF Canoe Marathon Masters World Cup in Pietermaritzburg. The 47 year-old was pushing for a bronze medal until disaster struck and finished sixth overall.

18 year-old Liam will be taking on the FNB Dusi for the third time following a 45th in 2016 with his father on debut and then a K1 debut in 2017. The experience of 21 Dusi’s has meant that Michael is in the process of being forced to steer the boat against his will.

“At the Fish I threw Liam into the front of the boat but he is adamant that I drive at Dusi,” Michael Stewart said.

“If we qualify for A Batch that will mean that I have qualified for A Batch 20 times in a row! Liam says that that is too much pressure for him as we only have one more chance to qualify!

“So we’ve got to do well at the 2-Day Klip at the end of January otherwise we are going to be in trouble!” Stewart chuckled.

There are many family combinations that take on the Dusi and for the Michael Stewart there is no better feeling than finishing the three-day adventure with his offspring.

“You cannot describe the feeling of getting to Blue Lagoon with your son,” he beamed.

“I have had the privilege of having some really great partners over the years but when Liam and I crossed the line together in 2016 I was doubly proud.

“There was an incredible sense of accomplishment that we had got through three gruelling days of paddling,” the East Rand Kayak Club member added.

Liam’s paddling career began when he was 15 at the Fish River Canoe Marathon and Michael and his wife were happy to see his interest in the sport grow organically.

“We never put Liam under any pressure to take up paddling and when he was about 13 he told me that he wanted to paddle the Fish.

“I still have the upper hand over him but I reckon halfway through this year he’ll be putting me under some serious pressure!”