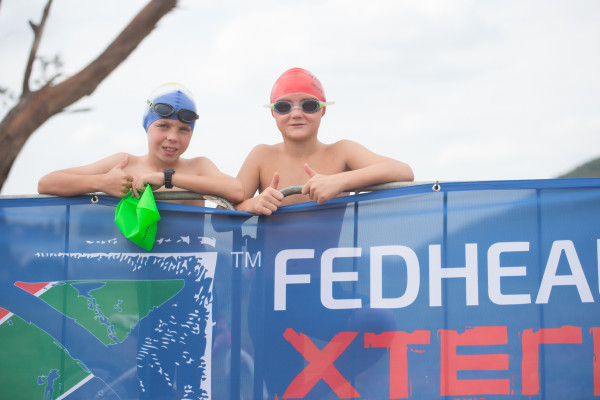 Kicking off a magnificent weekend of multi-sport racing with the Fedhealth XTERRA Kids race, families and friends were treated to an action-packed introduction to the sport of XTERRA.

“We are really proud to be able to introduce XTERRA to the residents of Port Elizabeth and its surrounds,” says Michael Meyer, Managing Director of Stillwater Sports. “XTERRA is about families spending time together, having fun outdoors. The Fedhealth XTERRA Kids race is really special as our junior XTERRA Warriors are the future of the sport. We are truly thankful for the support received both from the children and their parents and look forward to growing the Fedhealth XTERRA Kids race in Nelson Mandela Bay.”

Says Jeremy Yatt, Principal Officer of Fedhealth: “What made XTERRA really appeal to us, is the fact that it allows the whole family to be involved, whether in a team, in the kids events, or in the Lite and Full. Family values lie close to our hearts as a Scheme.”

Next on the XTERRA Kids calendar:

There are three XTERRA Kids categories to choose from:

After an exciting day out on route, XTERRA Warriors can look forward to recovering in the NUUN Recovery Zone. “We are there to put back what the race takes out with cold coolers of our proprietary blend of electrolytes in natural, delicious flavours – all without any sugars.   Refreshing flavours include Strawberry Lemonade, Tri-Berry, Fruit Punch, Lemon and Lime and Citrus Fruit,” says Etienne du Plessis, CEO of NUUN.

Another special feature to look forward to in the NUUN Recovery Zone will be the serving of the proudly South African ButtaNutt series of authentic tree nut spreads. “Our spreads are filled with healthy fats and proteins for sustained energy.  ButtaNutt will also be giving away an entire year’s supply to one lucky XTERRA finisher at each of the three events,” says Antoine van Heerden, Managing Director of ButtaNutt.