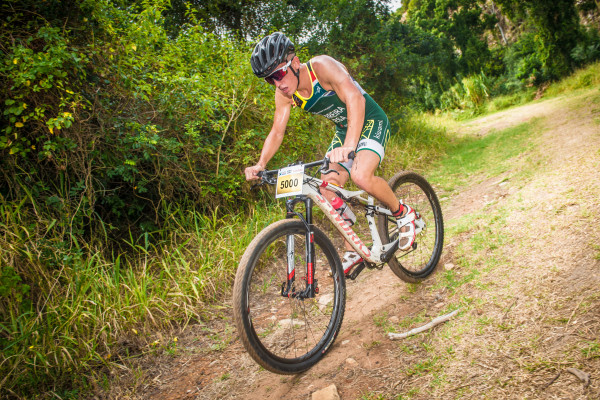 Michael Ferreira set a blistering pace completing the 400m swim, 12km mountain bike discipline and 6km trail run in an impressive combined time of 01 hour 11 minutes 19 seconds. “The ocean swim was different for a South African XTERRA event,” said Ferreira. “I was keen to try out my wetsuit. Exiting the swim I was in 4th place. I had a quick transition to the mountain bike discipline and went out in 1st place. All that I wanted to do was stay ahead of Herbert Peters who was extremely strong at XTERRA Buffelspoort last weekend. The route was phenomenal with great technical sections and tough climbs. Going into the run I just gave my all. XTERRA Nelson Mandel a Bay definitely is a must do event.” Adriaan Myburgh came in second, while Herbert Peters finished third.

In the women’s race Natia Van Heerden left nothing to chance, claiming gold in an impressive combined time of 01 hour 24 minutes 50 seconds. “Winning today was really unexpected,” said an astonished Van Heerden. “This is my first win in a while. It’s an amazing feeling. XTERRA tests you in every way. It’s great to have a sea swim and beach run as it pushes you even more. I’ll definitely be back next year.” Mikaela Jonsson came in second, while Tracey Almirall finished third.

After a gruelling day out on route XTERRA Warriors could regain their strength in the NUUN Recovery Zone. “We were there to put back what the race took out with cold coolers of our proprietary blend of electrolytes in natural, delicious flavours – all without any sugars,” says Etienne du Plessis, CEO of NUUN.

Another special feature in the NUUN Recovery Zone was the serving of the proudly South African ButtaNutt series of authentic tree nut spreads.

Next on the XTERRA SA Calendar: