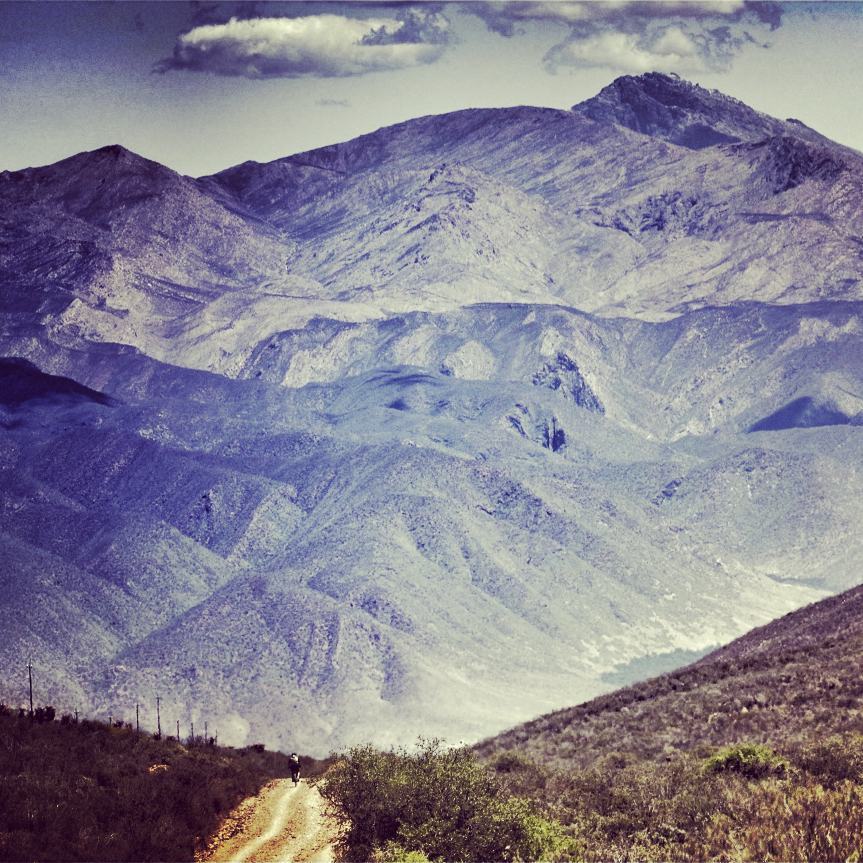 Classic To Hell and Back Photo with the “never ending” route laying in front of the riders.
Photos: Jacques Marais

Days before the 23rd original Mountain Bike Stage race of South Africa it was still unclear if the event will take place. Uncontrolled fires have been raging in the area for the last 13 days, blocking the route of the riders wishing to make their annual journey to ‘The Hell’.

With a bit of luck and lots of rain, event organisers, EcoBound Mountain Events, received the go-ahead on Wednesday that the rain has saved the day and extinguish the fires for good! The highway to hell was no longer on fire (no pun intended) but flash floods have caused the water crossings to become dangerously deep, making the Gamkaskloof inaccessible for cars. The snow covered peaks of the Swartberg Mountains on Friday, made it hard to imagine the severity of the fires hardly a few days back.

Race registration at De Hoek Mountain Resort, about 6kms from the Cango Caves , felt more like a reunion with riders catching up and sharing a cold one from Darling Brew. The mood very relaxed with no worries about the challenge tomorrow will bring. The distance of 60kms into the hell might sound easy, but it includes the longest mountain pass in South Africa and the total accumulated climbs clock in at 1750m for the first day.

On Saturday riders eagerly lined up for the start of Stage 1 in anticipation of the next 20kms of climbing over the Swartberg pass. Jacques Malherbe established an early lead, breaking away in the first few kilometers on the gravel road snaking through the farms in the Cango valley. Close on his heels Wynand Baard and Derek Devine were battling it out for 2nd place, chasing up the Swartberg pass and the rest of the way into the Kloof.

During the first day some riders experienced the obligatory blood, sweat and tears that come with riding to Hell. Nothing can cheer you up better than a Spur Burger just over the halfway mark. Known as the most remote location to have a Spur burger, riders will also agree that it is the BEST burger you will have! An unofficial watering hole sponsored by Darling Brew, surprised the riders with an ice cold beer, trying to provide more courage for the last climb of the day. Many stared the 4km climb called Heartbreak hill with good spirits. Still, many tears were spilled on this almost mocking, winding climb that creates the illusion of the being on top, at almost every turn. All was soon forgotten with the start of the decent on Elandspass, with the view of the finish down in Gamkaskloof.

The customary returners of the event (also known as Old Nicks) claims it was one of the most favorable weather conditions the event has seen.

After a cool down in the pool or river, riders settled down to be entertainment by Tony Cook, which included the crowning of the unofficial Movemeber Champ.   The race is also known as The unofficial Movember championships and is seen by many riders as the Mountain Bike Year-end function, signaling that another year has come to an end. Dinner was enjoyed under the magnificent view of Elandspass, a few riders nervously glancing up at what lies ahead for tomorrow.

The second day the Old Nicks were seeded (out of respect for doing more than 10 events) to line up first to start the grueling 4km climb up Elandspad. Riders followed the same route back to De Hoek, turning each awesome downhill from the previous day into climbs, changing the character of the route completely. The second day’s accumulated climbs is 1900m.

This is an original real word race experience. No wonder it is a favourite amongst the mountain bike fraternity.

Due to visitor restrictions in this Cape Nature Reserve, there is a limit on entries. Entries will open on 01 June 2018.

Tagged with: EcoBound Mountain Events featured To Hell and Back