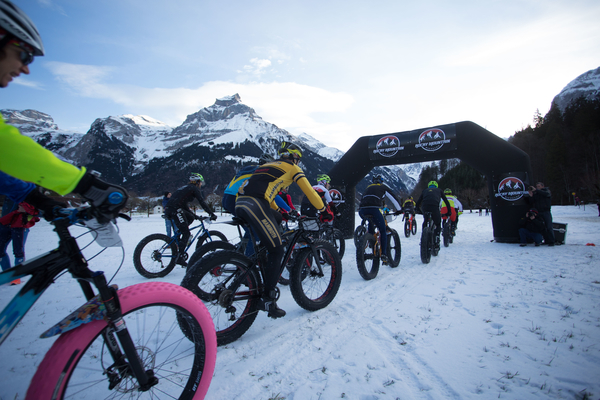 Riders at the start of the inaugural Snow Epic, held in Engelberg, Switzerland on 15 January 2015.
Photo Credit: Nick Muzik

Just in time for the Stage 1 of the inaugural Snow Epic, the weather turned for the better. Clear skies, cool temperatures and 122 riders eagerly awaited the start to this unique event. Although there wasn¹t any new snow, the route planners made the most of what was on offer.

You could sense the excitement of the riders and organisers going through the roof as the helicopter hovered above the start line, capturing the final moments before the start. At exactly 9:30am the very first edition of the Snow Epic got underway.

Although the good weather might have led some riders to believe the route conditions would be easy, this was certainly not the case. The fast pace of Stage 1, complemented by the icy conditions, resulted in many crashes, some more serious than others. Even though some riders couldn¹t control their fatbikes at times, and landed on the icy paths, their sense of enjoyment of the beautiful route from Engelberg down the Fürenalp valley definitely overwhelmed some.

Esther Süss from Switzerland, a two time Absa Cape Epic winner, took home first place in the women¹s race with a time of 1:16.50,9. Alba Wunderlin (CH) and Amber Stull (USA) finished in 2nd and 3rd respectively. The men¹s race was won by Tomi Misser from Spain with a time of 1:05.29,4 ahead of Olympic gold medallist Bart Brentjens and reigning Masters cross country world champion Rune Hoydahl.

Tomorrow will see the riders head from Engelberg up towards the Brunnihütte which will surely be a very scenic route, but also one of the most challenging of the 2015 Snow Epic. The climb will be counted as Stage 2. After enjoying the views from the Brunnihütte, riders will line-up again for Stage 3, which sees them race down towards Engelberg again.