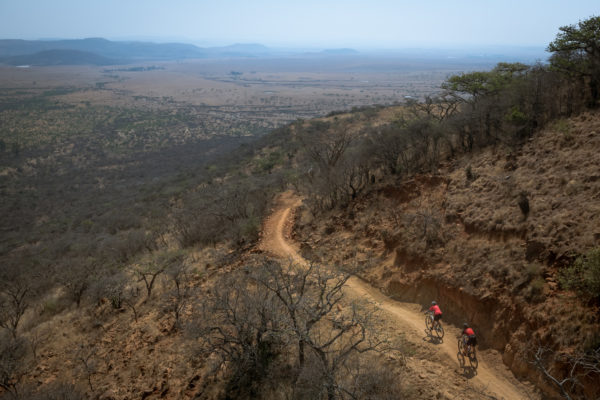 Bell and Botha were neck and neck with Phil Buys and Matthys Beukes (Pyga Eurosteel) all weekend, ultimately taking the win just three seconds ahead of the 2018 champions.

McDougall and De Groot were dominant throughout the race, finishing seven minutes ahead of their nearest challengers, Sarah Hill and Theresa Ralph (Galileo Risk LIV).

In the mixed category, Darren and Candice Lill (Summit) had it all their own way, cruising to first place overall ahead of Hayley Smith & Jeremy Hulsen (Bell Equipment)

For De Groot, the double win was a fitting way to celebrate a comeback to competitive cycling after surgery earlier in the year.

“It feels good to be racing hard and getting the results,” said De Groot. “I feel great, I have one more race left for the year, and I don’t really feel like taking a break. I’m thrilled to have ridden so well this weekend. Riding with Amy was also great fun. She knows the trails so well here, so I just let her show me the way!”

In the men’s race, nothing could separate the top two teams. With shortish days – certainly for the elites – and short, punchy climbs instead of long drags breaking away was a near impossibility. On Sunday’s final stage Phil Sebona and Pieter du Toit did attack early to try and close the gap with NAD Pro, but Bell and Botha kept dragging them back.

Phil Buys then set the pace up Spioenkop around the 34km mark of the day, but Wessel Botha was able to keep Buys in his sights, dragging his partner Bell along for the ride. With a 14km singletrack descent from the top of Spioenkop almost all the way to the finish line, overtaking or attacking was out of the question.

In the final kilometre the riders were faced with a series of left and right turns. Bell had learned from his mistakes last year and kept his nose on track, saving his energy for a big burst to the line in the final 200m. Ultimately, Bell and Botha finished in between the two Pyga riders, claiming the team title for the event.

For the bulk of the field, the weekend was an opportunity to ride hand-crafted trails in a pristine farm and bushveld environment. As always, the final descent down Spioenkop to the race village left riders grinning from ear to ear, promising to return next year just for the 14km final day descent. Another big hit was the chill zone on the banks of the Tugela River with the idyllic setting no doubt playing a part in the consumption of over 1000 litres of draught beer.

Up next is the Berg & Bush Great Midweek, the revamped and recharged midweek ride starting on Tuesday at Em’seni and then the original 2 Day, which starts on Saturday 12 October.