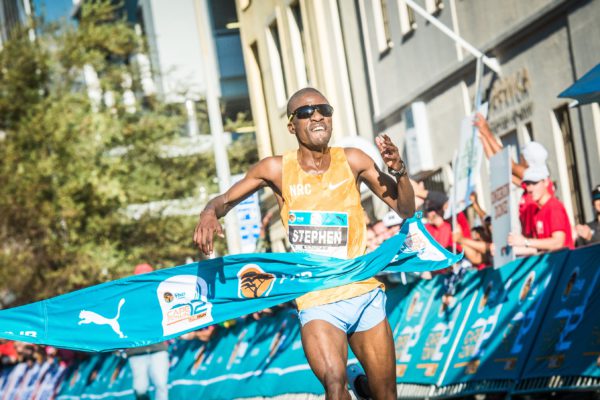 Stephen Mokoka will be back to defend his title at the Cape’s premier 12km road race, the 3rd annual FNB Cape Town 12 ONERUN on Sunday, 21 May 2017. Mokoka will, however, face a new foreign challenge in the likes of Morris Munene Gachaga from Kenya and Ethiopia’s Walelign Belachew. Seen here: Stephen Mokoka claiming gold at the 2016 FNB Cape Town 12 ONERUN. Photo Credit: Tobias Ginsberg

Stephen Mokoka will be back to defend his title at the Cape’s premier 12km road race, the 3rd annual FNB Cape Town 12 ONERUN on Sunday, 21 May 2017.

Mokoka needed every ounce of experience, grit and determination to thwart the challenge of 2015 runner up, Daniel Salel in the 2016 race. This year he will be aiming for a bigger victory margin than the nail biting 1 second of 2016 when he toes the line at Woodbridge Island in Milnerton.

Mokoka will, however, face a new foreign challenge in the likes of Morris Munene Gachaga from Kenya and Ethiopia’s Walelign Belachew. Gachaga is a class act and a very real threat to the title defence of Mokoka. With personal bests of 28:32 for 10km on the road and 1:00; for the half marathon, Gachaga could well prove to be a thorn in the side of Mokoka. Gachaga has been consistent over the half marathon distance, running under 61 minutes thrice in the last 18 months; his latest appearance over 21km being clocked at 60:38 when he won the Paris Half Marathon in March, just 3 seconds shy of his best.

“I have heard a lot about the race and am looking forward to racing in Cape Town,” says Gachaga. “I know the route is flat, fast and conducive to good racing, so I will make sure I am in good shape come race day. I know it won’t be easy with Mokoka in the race, he always makes it tough, but I am confident that I can do well.”

Walelign Belachew is also a strong contender. At merely 18 years of age, he has already clocked 29:52 for 10km on the road.

Throw in the mix arch rival and friend Elroy Gelant, Lucky Mohale, Desmond Mokgobu and David Manja, the prospects of a mouth-watering clash on Sunday, 21 May is looking very good. The 2016 FNB Joburg 10K CITYRUN winner, Namakoe Nkasi of Lesotho is also in the mix. Nkasi has shown both Mokoka and Gelant a clean pair of heals on more than one occasion. The quietly spoken Lesotho athlete will be a dangerous contender. Nkasi has definitely developed a taste for the 10km distance.

Mokoka recently acted as pacemaker for Eliud Kipchoge at his breaking2 attempt and is in good form coming into the race. “I want to defend my title,” says Mokoka. “Pacing for Eliud (Kipchoge) showed me that I am in good form. It is important for me to make sure the title stays in South Africa.”

Prize Purse: The 2017 FNB Cape Town 12 ONERUN boasts a Prize Purse to the value of R200 000. The Prize Purse Breakdown can be viewed via the following link: http://www.thecapetown12.com/prizes/

Charity Support: When entering online, runners can choose to support either or both the FNB Cape Town 12 ONERUN Charities: The Cape Of Good Hope SPCA and Die Burger Kersfonds.

FNB Business is proud to be the title sponsor of the FNB Cape Town 12 ONERUN.  This sponsorship forms part of our ongoing strategy to support local and community events that focus on healthy lifestyles and family involvement, and impact the environment they operate in positively. Road running is an inclusive sport that allows us to engage with a larger audience and support sporting disciplines that advance our commitment to building, enduring and rewarding relationships across communities in which we operate. The fresh and unique nature of the FNB Cape Town 12 ONERUN is aligned to our belief in innovation; a belief that celebrates new ideas, fresh thinking and creating unique experiences.