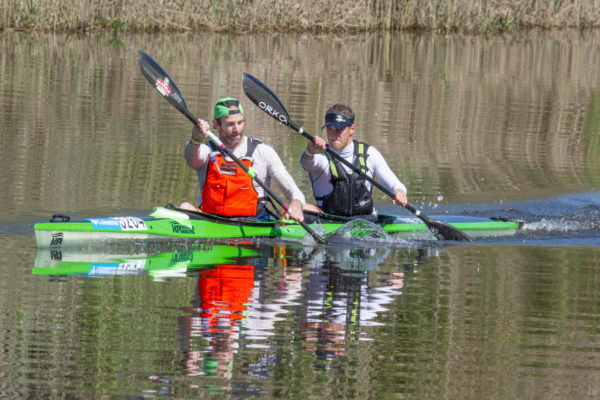 2015 Breede River Canoe Marathon winners Graeme Solomon (front) and Stu MacLaren (back) will team up with Greg Louw and Jasper Mocké respectively for this year’s which takes place on 3 and 4 September with the two crews likely to go head-to-head for this year’s title.
John Hishin/
Gameplan Media

Robertson – No fewer than nine former Breede River Canoe Marathon winners since the turn of the millennium will line-up for this year’s edition of the two-day river race from Robertson to Swellendam when the action gets underway on Saturday.

Last year’s winners, Graeme Solomon and Stu MacLaren will combine with Greg Louw and Jasper Mocké respectively this time around, the latter two being previous Breede champions themselves.

For Bamboo Warehouse/Knysna Racing’s Solomon, a win this year would bring him his fifth Breede title – all with different K2 partners – while his partner, the experienced and powerful Louw (Knysna Racing/Merrell), hopes to add to his 2014 crown.

Euro Steel’s richly talented MacLaren hopes his pairing with surfski sensation and 2013 Breede winner, Mocké (Euro Steel/Mocké Paddling) will see him continue his transition from the top of the Under-23 age group, into the upper echelons of the senior ranks of marathon racing in South Africa.

These two crews contain four of the six most recently crowned champions and appear the early favourites to go hammer and tongs at it over the 70 kilometres of racing for this year’s spoils.

Both Mocké and MacLaren as well as Solomon and Louw will however be chased hard by some highly talented K2 teams.

AQRate’s Louw van Riet and Gavin Louw have spent much time together in training – both in K1s ahead of the Berg River Canoe Marathon in July and now in a K2 for the Breede – and will be eager to throw their hat into the ring for a podium finish.

Think Kayaks’ Sean Rice is another who knows what it takes to win on the Breede River having reigned victorious with Solomon in 2012 and he and his younger brother, Kenny, will undoubtedly bring plenty of power to this year’s clash.

Lance King and PW Basson have reunited once again for this year’s race having achieved Breede success back in 2009, while King’s fellow 2011 race winner, Heinrich Schloms will too be part of this year’s mix, this time partnering John de Villiers.

While unlikely to challenge the field’s elite competitors for any top honours, 2000 Breede winner, Peter Coles, will too be on the water for this year’s clash as he combines with Rob Hart in the age groups tussle.

Interestingly, having started as a K1 race in 1968 and then changing to a K2 championship event two years later, half of the first two victorious K2 crews – Roelof van Riet (1970) and Andre Collins (1971) will too combine for this year’s race and take up their position a little further back in the field.