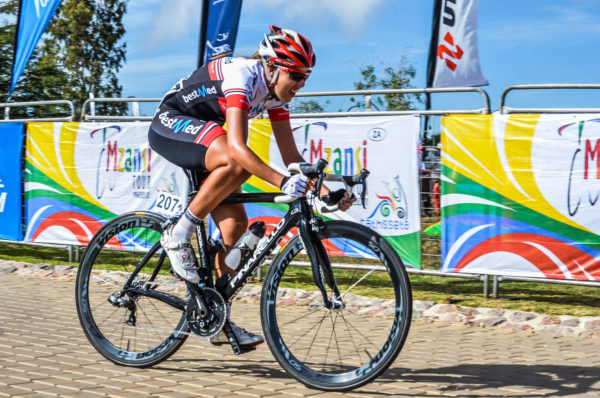 Team Bestmed-ASG has re-signed Chane Jonker, who raced in the United States for eight months, and is now looking to challenge the podium in several South African races. Photo: Cycling Direct

The 23-year-old all-rounder from Krugersdorp joined the California based JETCycling team at the tail end of last year for an eight-month racing stint in the United States.

During this time, she competed in races such as the Redlands Bicycle Classic, Valley of the Sun stage race, Dana Point Grand Prix and Temecula Grand Prix, in which she placed fourth.

“I have always had good support from Bestmed-ASG,” said Jonker, who has also won the Serengeti Classic and Mogale Spring Classic with the team in the past.

“In bigger events it makes such a difference to have some stress taken off. I also love being part of a team set-up.”

The said she found racing in America “quite different” to that in South Africa.

“Besides the tours, there is a large amount of criterium racing. It requires good bike handling and you have to hold your own in larger fields.”

Jonker, who grew up in Roodepoort, said the circuit racing took some getting used to because it was hard from the gun and shorter.

“A proper warm-up and positioning are very important,” she said.

“I really do enjoy the style of racing and have come to love the excitement that goes along with it. The speed they race and corner at is really high.”

She said racing in the US not only improved her technical skills, but made her more savvy.

“I used to get anxious, never wanting anyone to get ahead of me. Now I have more tactical knowledge and have learnt how to read a race.

“I burn my matches more cleverly.”

She said their training tied in with the style of racing. “We spent fewer hours on the bike, but did more intervals.”

Apart from the end-of-season races, Jonker hoped to be a podium contender in the Bestmed Tour of Good Hope in March next year.

“I obviously go to a race to win and I’ll make sure I go there with very good form to give it my absolute best shot.”

Other goal races, she said, would be the Mpumalanga Tour and national championships.