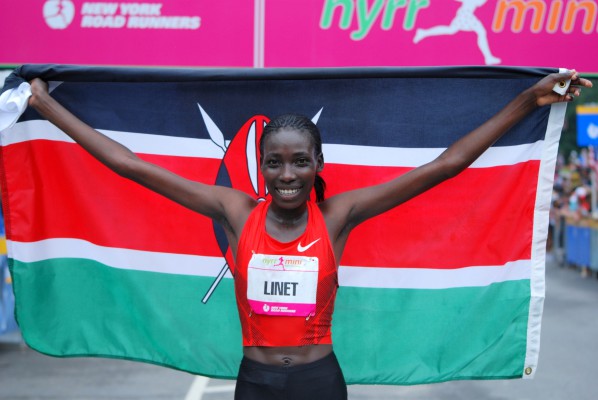 The latest addition to the FNB Cape Town 12 ONERUN is Kenya’s Linet Masai, the 2009 World Champion in the 10 000m and a 30:26.50 athlete, a time she set at the Olympic Games in Beijing when she finished fourth overall.

If the Olympic Silver and Bronze Medallist in London and four time World Champion Vivian Cheruiyot thought she would have it all her own way on Sunday 17 May, then she is in for a big surprise. Masai’s time places her 24th on the World’s All Time List, six positions ahead of Cheruiyot’s 30:30.44 which she did at the London Olympics.

However, in head to heads, Cheruiyot has the upper hand. The two met in the 5 000m final of the World Championships in 2011 and Cheruiyot came out on top, winning the gold medal in 14:55.36 with Masai finishing sixth, almost six seconds behind (15:01.01).

They also met in the 10 000m final with Cheruiyot again claiming the laurels and dethroning Masai as World Champion. Masai had won in 2009, but this time around had to settle for the bronze medal.

In 2012, Masai broke 32 minutes for the 10km three of the four times she ran, finishing third at the World’s Best 10km (31:15), winning the prestigious Bupa Great Manchester Run in 31:35, before finishing fourth at the Tilburg in September (31:19) and finally clocking 32:13 and second place in Madrid at the end of December.

Whilst Cheruiyot took most of 2014 off to have a baby, Masai has focused on her road running, and successfully so. She finished in the top ten in every race she entered. The year started with two international cross-country races, finishing third in both. A third at the World’s Best 10km in San Juan on 23 February (32:13, also a season’s best), was followed by yet another third place in the Bangalore 10km on 18 May. Two more 10km races in June and July saw her finish fourth and sixth at the New York Road Runner’s 10km and Boston MA 10km respectively (32:16 and 32:27).

Masai ended 2014 with a personal best of 71:45 in the half marathon, placing third behind Pauline Njeru and Doris Changeywo respectively in the Bupa Great Birmingham Run. South Africa’s Irvette van Zyl was sixth. Changeywo, who was second, has also been signed to take part in the FNB Cape Town 12 ONERUN. South Africa’s best, such as Mapaseka Makhanya, Rene Kalmer and the Phalula twins could not ask for better opposition, especially on home soil.

“The signing of Cheruiyot, Masai and Changeywo indicates we are serious about putting on a world class event in South Africa and setting the standard in this country’s road running. It is important that our athletes get the opportunity to race the world’s best at home as this will enable them to post faster times which should open doors for them internationally,” said Michael Meyer of Stillwater Sports.