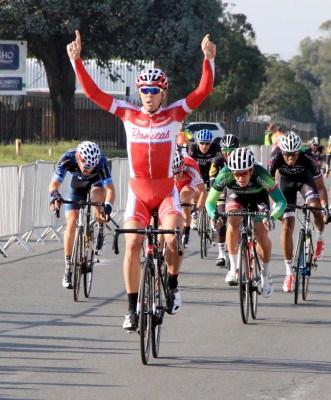 Herman Fouché enjoyed a taste of hometown glory when he ousted the top sprinters in the elite bunch to take his second win at the Emperors Palace Classic road race in Johannesburg on Sunday.

Fouché, who last won the event six years ago, was given a textbook lead-out by his Bonitas teammates to power ahead on the kind of long finishing drag that has become his signature.

He blazed into the finish near the casino resort to claim the 102km victory in 2:18:25, a single second ahead of Europcar SA’s Ryan Gibbons, with Tyler Day of Westvaal Pro Cycling a further second back.

The Boksburg native said he was delighted to have notched up his second win of the season after taking the opening stage of the Bestmed Tour de Boland last month.

“It’s taken me a while to get back to winning this race again.

“I’m happy to have pulled off the win – the team did a superb job of delivering me to the line.”

The 28-year-old said the racing got off to a chilly but flying start in near perfect conditions on the relatively flat out-and-back course.

A flurry of attacks soon started on the Rondebult Road but were quickly neutralised by the hard-driving peloton.

This pattern was repeated as they headed out on the loop towards Heidelberg and Springs, and back past Carnival City, with no significant breakaways able to take shape.

In the closing kilometres, the bunch came alive again as the teams jostled to get their fast men to the front for the inevitable mass sprint.

The tight control that rivals Westvaal and Europcar SA had exercised over the bunch proved to have been a tactical error as they passed through Fouché’s home turf on the way to the finish.

In the end, it was the combination of his local knowledge and uphill power that secured line honours. 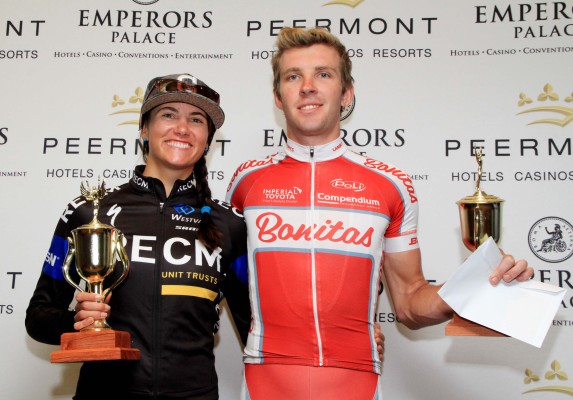 Cherise Stander of RECM (left) and Herman Fouché of Bonitas were the winners in the women’s and men’s race respectively at the Emperors Palace Classic in Johannesburg on Sunday. Photo: Yolanda van der Stoep

In the women’s race, Cherise Stander took the win for RECM.

She was chased to the line by Lynette Burger of Activate-Demacon, with Clover’s Charlene du Preez just off the pace.

“I’ve had a few ups and downs this year but I’m very happy that it’s coming together for me now on road and mountain bike,” said Stander, who finished second in a USN MTB Cup series race on Saturday.

She said a seven-rider break had formed early on in the road race and stayed together for most of the way.

“Today the women took it upon themselves to do their own racing and launch their own attacks.”

Stander said the pace had been extremely fast, in keeping with the current high standard of women’s racing.

“I’m very excited to see where women’s racing is going in South Africa.”

Later in the day, the Emperors Palace Circuit Spectacular criterium race saw the country’s top sprinters set a blistering pace through the grounds of the resort.

Westvaal speedster Ryan Felgate blitzed through the laps to take victory in the half-hour crit.

Junior rider Alex Parsons kept pace with his elite counterparts to round out the podium for Team Giant.