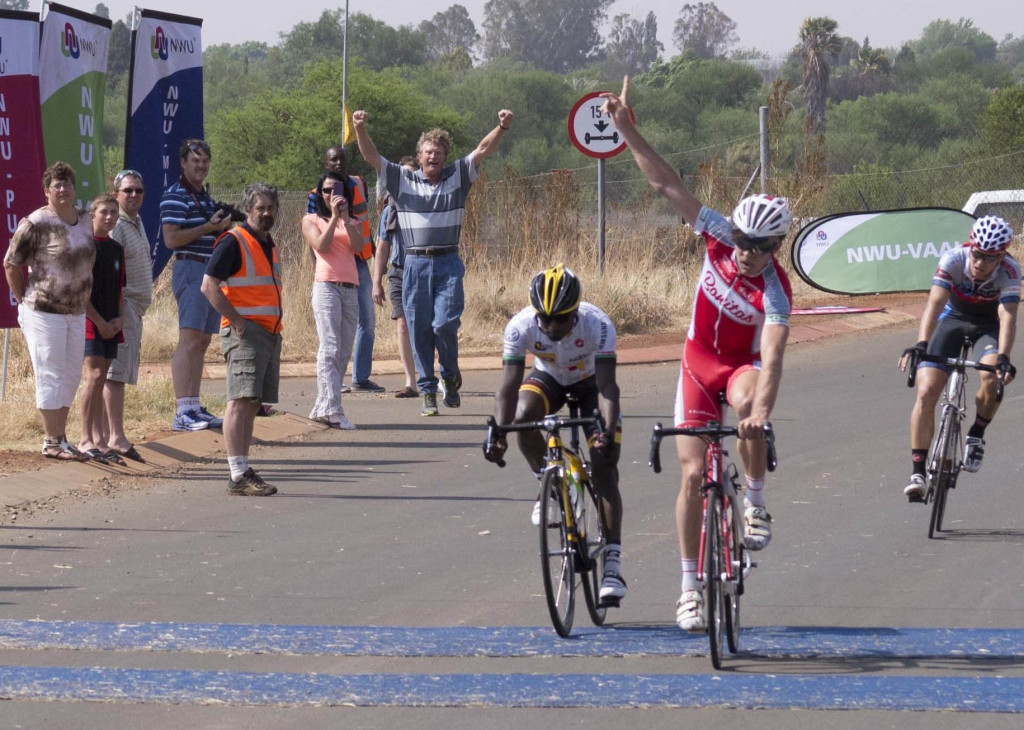 Sprinter Herman Fouché hurtled into a heavy crosswind to claim his hat-trick of wins at the Bestmed Campus2Campus SuperClassic in Potchefstroom on Sunday.

The Bonitas fast man tore into the finish at the North-West University rag farm to take the 10th edition of the cycle race in a time of 2:40:54.

African road champion Tesfom Okbamariam turned in a tenacious performance and clung to Fouché’s wheel to seize second place in the same time for the MTN-Qhubeka feeder team.

Westvaal-BMC’s Tyler Day chased hard to the line to clock in third in 2:40:55.

Fouché said he was delighted with his third successive victory in the 107km race, but emphasised that it had been a team effort.

“As Team Bonitas, we did a great job in defending the title.

He said it was even more satisfying in light of the new route, which had moved from the Vaal Triangle campus, and the challenging conditions on the day.

“It was quite a hard race, with some major climbs, and the route change definitely played a big role. The wind was also a major factor.”

The 27-year-old said his game plan going into the race had been very simple.

“Just survive!” he laughed. “As a sprinter, you have to survive, stay in front and not miss the crucial moves.”

With the blustery conditions dampening efforts early on, the first real move of the day came after 50km when Peter Lee Jefferies of Inter-Active Technologies went off the front in a brave solo breakaway.

He was eventually joined by Calvin Beneke of Europcar SA at the 70km mark but the two were chased down in the last 30km.

Because of the cross tailwind, Fouché said no serious attempts had gone up the road until after the turnaround point on the out-and-back course.

“Everything went crazy after the turn. The race was just out of control because the winds were pumping.”

He said the MTN-Qhubeka feeder team had started it all off by sending a train up a long drag.

“They put us in the gutter, but my teammate HB Kruger and I survived. HB looked after me till the very last kilometre.”

“They definitely had the advantage on the day because the race takes place on their training routes and they know the roads.”

After making the finishing drag his own in recent years, Fouché said he had been impressed with how well Eritrean cyclist Okbamariam had kept pace with him on the new rise into the home straight.

“I was shocked to see how fast that little rider was. I started kicking and he stayed with me the whole way; they don’t normally stay with me on an uphill finish.”

Fouché said he was pleased to see his own form coming on again ahead of October’s Amashova Durban Classic, the team’s next big objective.

In the women’s race, Garmin’s Yolandi du Toit took an emphatic win in 3:01:15, followed by national veteran road champion Juanita Venter and Carla van der Merwe – both of Bestmed-ASG – in 3:03:08 and 3:07:52 respectively.