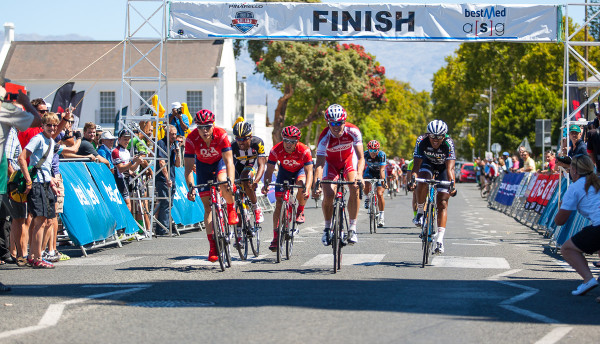 Herman Fouché held his line on a twisting and technical closing stretch through the streets of Worcester to claim the opening stage of the Bestmed Tour de Boland, presented by Pinarello, on Monday.

Fouché, riding in the colours of Bonitas, took advantage of a lead-out train driven by the Australian Drapac team to take the 114km stage from Paarl in a time of 3:10:30.

“As we came into the corners I started calling my teammates and they did exactly what I wanted them to do and we pulled off a fantastic win,” said Fouché, who also won the opening stage of the 2011 tour.

“That was unbelievable, a great fight by the team.”

The racing got off to a muted start as a strong headwind and searing heat dampened any early efforts by the bunch as they headed out of Paarl after the neutral zone through town.

Europcar SA’s Bradley Potgieter made a daring solo escape within the first 10km and his efforts paid off as he held the bunch at bay to claim the first Compendium sprint prime outside Franschhoek.

Just before the 30km mark, a four-rider breakaway caught Potgieter but they were reeled in as the peloton powered their way up Franschhoek Pass.

Strong gutter winds helped splinter the bunch on the 7km climb, with former African road champion Tesfom Okubamariam coming to the fore to win the Aramex king of the mountains title for the MTN-Qhubeka feeder team.

The bunch came back together after the pass, with Abantu’s Nolan Hoffman taking the second hotspot just outside Villiersdorp.

A series of attacks followed over the final 25km but were quickly nullified as the riders headed towards the finish.

“We couldn’t really go anywhere because of the wind but the guys kept trying,” said Fouché.

As they turned into their destination, the fastman’s teammates sprang into action with team captain Luthando Kaka giving him and Shaun -Nick Bester the lead-out into the first corner.

“Shaun -Nick went a bit too early but he went and caught the two guys in front.

“I waited for Drapac to come past and jumped onto their train, while Shaun-Nick bumped into their train in front of me, setting me up perfectly.

The former Cape Town Cycle Tour champion demonstrated his well-known turn of speed to snatch the win from the visitors from Down Under.

The West Rand-based sprinter said however that the overall outcome of the tour would be decided on the climbing and time-trial stages.

“So don’t be surprised if you see the yellow jersey pacing for the climbers tomorrow.”

In the women’s race, Lise Olivier of Time Freight E pipped RECM’s defending champion Ariane Kleinhans to the post, with Anriette Schoeman of Africa Silks-Bestmed rounding out the day’s podium.

Olivier, who missed the overall win by a matter of seconds last year, said the racing was always going to be tough because of the windy conditions and starting with the veteran men.

“The racing really happened on the climb, with myself and Ariane making it hard. I went over the top first with Ariane a few metres back and then the men joined us on the downhill.”

The two rode together until the finish with Olivier just managing to hold last year’s winner at bay.

The second stage rolls out of Worcester on Tuesday and finishes 111km later in Op-die-Berg. It features two signature climbs – Mitchell’s Pass outside Ceres and Gydo Pass near Prince Alfred Hamlet.