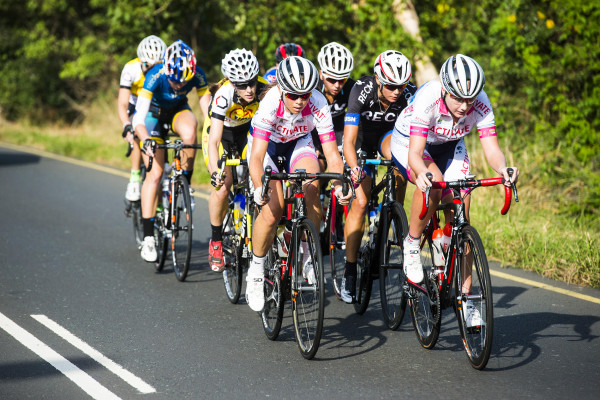 Durban – Multiple former champion Lynette Burger Pieterse looks set to shelve her plans for a third title at the aQuellé Tour Durban cycle classic on Sunday 24 April after breaking her wrist in a freak accident on the weekend.

The 35 year old Boksburg based star, who is racing with the Demacon team, crashed on Saturday, leaving her with a hairline fracture in her left wrist and torn tendons.

“It was so stupid,” said a despondent Burger Pieterse. “We were out on a training ride and as we got to the set of robots about five kilometres from home, I tried to unclip from the pedals when I stopped, but there was a problem and I couldn’t unclip.

“I overlapped with my husband’s wheel and fell. I put out my hands to cushion the fall, and the minute I landed I realised that there was a problem with my left wrist.”

She rode home nursing the injured wrist, showered and then went to hospital where doctors confirmed the hairline fracture to her left wrist and torn tendons.

Burger Pieterse is well known for her tenacious mental strength, and is reluctant to let the injury hamper her riding plans.

“I am going to the doctor every week to assess it, but for now it looks like someone is telling me to take a rest!” she said.

She has opted to have her cast removed as it was hampering her. “I have a small child to take care of and I can’t do that with one arm in a cast,” said Burger Pieterse.

“I am right handed but unusually I do most things with my left hand, so this injury is not great for me,” she said.

She will in all likelihood travel to support her new Demacon team mates in action in Polokwane on the weekend, but will do no more than offer moral support from the sidelines.

She had been planning a brave aQuellé Tour Durban campaign hoping to overcome the bigger women’s teams using her experience and tactical nous to triumph against the odds stacked against her.

While she is reluctant to take a final decision about her chances of racing in Durban next weekend, the reality of her injury has sunk in.

“As athletes we tend to be very selfish, and wrapped up in the moment,” said Burger Pieterse. “I am now feeling really grateful that the injury was not more serious.”

“It is frustrating. I was working hard to try and get back to form when this accident happened,” she said. “To make it worse I always really look forward to the trip to Durban. It feels like a holiday as well as a big race.”

Late entries will be taken at registration at Suncoast Casino & Entertainment World from 10h00-17h00 on Friday, 22 and Saturday, 23 April.