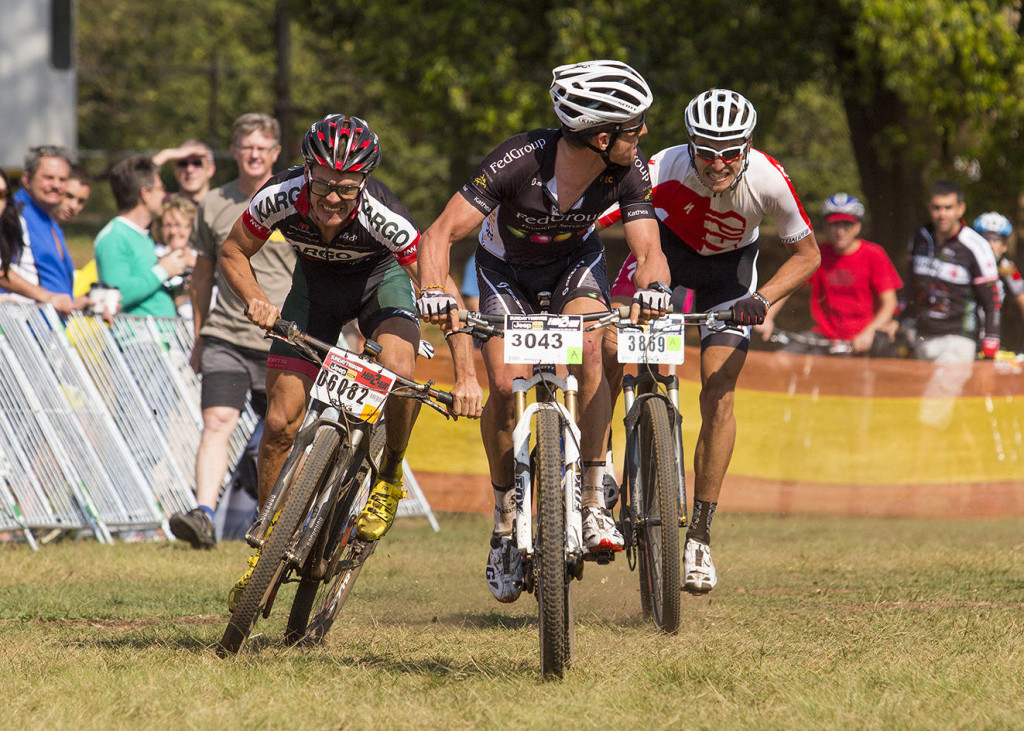 With defending champ Rourke Croeser (left) competing in the Isuzu Trucks PE to Plett stage race, new Kargo teammate Brendon Davids (right) is relishing the opportunity to battle it out for the Sunday Tribune Jeep Hill2Hill title he narrowly missed out on in 2013 this weekend. – Jon Ivins/
Gameplan Media

Durban – With the 2014 UCI MTB & Trials World Championships a thing of the past, Kargo Pro MTB Team members are back on home soil and looking forward to the upcoming opportunity this weekend’s racing presents to showcase their talents on the local mountain biking scene once more.

After a positive showing at the final leg of the UCI MTB World Cup in France by team ace and elite men’s cross country competitor Rourke Croeser, he and under-23 men’s duo Brendon Davids and William Mokgopo as well as junior men’s talent Alan Hatherly suffered a disappointing few days in Hafjell, Norway last weekend.

“Méribel (France) was so close to being an absolutely incredible ride,” said Croeser shortly after touching down back in South Africa. “To get a puncture with less than two laps two go when I could see the guys fighting for 15th and upwards just ahead of me was really frustrating but it was still a really good result for me.”

“I’ve always known I’ve got the talent and ability but I needed a bit of a result to help prove it and France really was a big step forward in career.

“Getting a 54th at Worlds in Norway was definitely not what we as a team or me as a rider had intended at all. It really was a huge disappointment, especially with my current shape and form!” he added.

This weekend’s Isuzu Trucks PE to Plett stage race however presents the first year elite competitor with a golden chance to put his recent disappointment behind him as he partners under-23 team mate Travis Walker.

The pair made their stage racing debut together at this year’s Nedbank sani2c and the Eastern Cape clash from 13-16 September presents them with another opportunity to build on their impressive foundation they laid down earlier in the year.

“Trav (Walker) has prepared really well and is in great shape at the moment and I’m looking forward to getting back out there with him this weekend,” said Croeser.

“I might suffer a bit on the first stage with all my recent travels having taken quite a bit out of me but we’re definitely going there to win so we’ll look to really give it our all!

“PE to Plett also serves as perfect preparation for the Cape Pioneer Trek that’s on our team’s horizon in the near future!” he added.

While Croeser looks to make the switch from cross country to stage racing as seamlessly and quickly as possible, Walker comes into the four-day race full of confidence after his recent victory in the Mandela Day Marathon MTB Dash.

“It was nice to finally win a race and especially one with such meaning behind it!” said Walker.

“I’ve been training hard ahead of PE to Plett and Rourke and I really combine well as a team, so hopefully we can achieve our goal of winning the race this weekend.

“We’re not sure who else will be down there so our competition is a little bit of an unknown but that, together with never having ridden the race before, means we’re excited to try something fresh and explore new areas of the country,” he added.

Meanwhile back in the team’s home province of KwaZulu-Natal, under-18 Hatherly will tackle the 45km event of the Sunday Tribune Jeep Hill2Hill this Saturday before team newcomer Davids and marathon regular Stuart Marais will look to fly the flag high for South Africa’s first ever UCI Trade Team at the tough 100km race of iconic event on Sunday.

“Worlds was pretty disappointing for me having had to get off my bike at the first section of singletrack on the very first lap only to then slip on a wet root – which saw my bike fall into the traffic and damaged my back brakes – so I’m definitely looking forward to Hill2Hill this weekend!” said Davids.

“I came off second best in the three-way sprint last year and, after Worlds last weekend, I’m hungry to do well on Sunday and it will be great to have Stu (Marais) there with me as well!” he added.