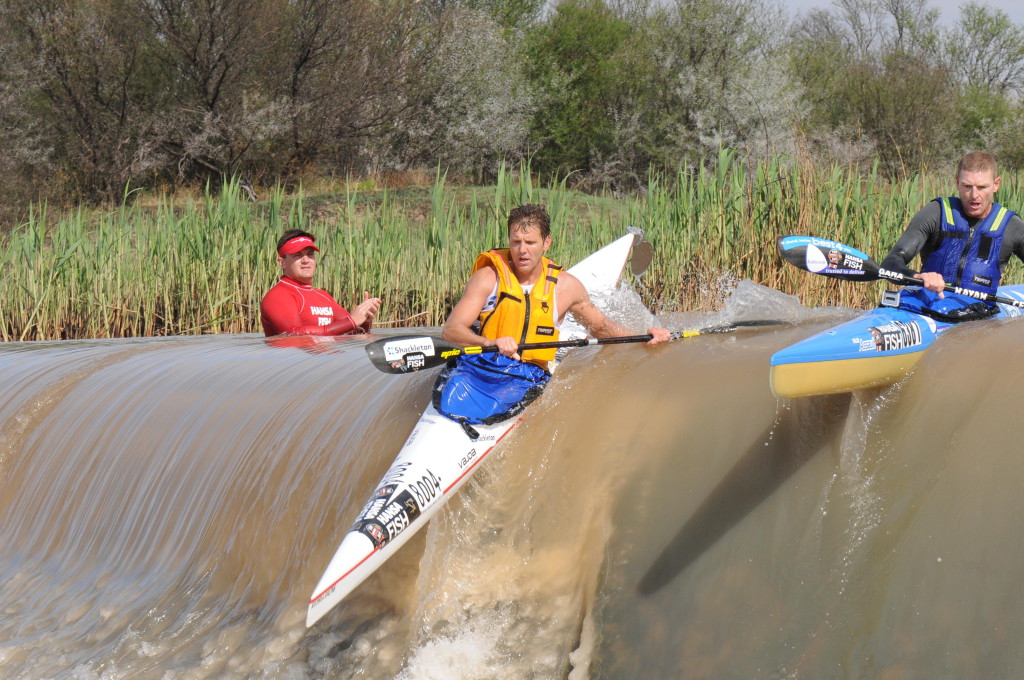 2012 winner Len Jenkins (left) seems unlikely to take to the start line of the 2014 Hansa Fish River Canoe Marathon that takes place in Cradock on 10 & 11 October after some time in the wilderness, opening the door for Hank McGregor (right) clinch his maiden K1 Hansa Fish title.

Cradock – The 33rd edition of the Hansa Fish River Canoe Marathon is poised to crown a new champion in both the men’s and women’s race in 2014 with both K1 defending champions unlikely to take to the start line on Friday 10 and Saturday 11 October.

Fisher King Len Jenkins has been sublime since the turn of the millennium having won all seven K1 titles on offer between 2001 and 2012 however the unpredictable yet hugely dangerous competitor has been in the canoeing wilderness since the 2013 Dusi Canoe Marathon and has shown little sign of returning to action ahead of the Eastern Cape’s major.

2012 women’s victor Michéle Eray, who became the first Eastern Cape paddler to win her local race in fifteen years since the late Daniël Conradie’s victorious effort in 1997, will certainly not be back in 2014 to defend her title after she took up the position of USA Canoe/Kayak’s High Performance Manager in August last year.

The absence of both former winners opens the doorway for a new champion to be crowned and no one will be hungrier to make the spoils their own than five time K2 Hansa Fish winner and triple Canoe Marathon world champion Hank McGregor.

Cradock’s K1 title is one of just a few to have evaded the Team Jeep/Kayak Centre paddler, arguably the greatest all-round paddler of all time, and with an extra week this year between the Canoe Marathon World Championships in USA and the Hansa Fish, all the signs point towards McGregor clinching the title.

Van der Walt’s younger brother Brandon, now based in Cape Town after relocating from Durban at the start of the year, will also be hungry to increase his career podium tally and his fourth place with fellow under-23 Stu Maclaren last year will only further that craving.

Four time Dusi winner, under-23 Canoe Marathon world champ and recently crowned 2014 Berg River Canoe Marathon victor Andy Birkett of EuroSteel will be another who will be eager to put in a solid performance after his World Champs return as he looks for a maiden Hansa Fish podium finish while fellow Dusi winner Lance Kime will hope to be in the mix as well.

Together with Birkett, hometown hero Greg Louw recently powered to a fast-finishing third place at the iconic Sella Descent in Spain, just narrowly missing out on second place and possibly even a memorable victory and the Eastern Cape local will hope this will hold him in good stead ahead of this year’s Cradock clash.

The women’s race on paper would appear to be Abby Adie’s to lose as the Best 4 Healthcare/Kayak Centre continues her march of sublime consistency on the local river marathon scene.

Adie recently added the Berg women’s crown to her long list of achievements and will hope to build on the K2 victories she clinched in 2011 and 2013 with Hilary Bruss and the Czech Republic’s Anna Adamová respectively.