Friends ride the Absa Cape Epic for The VisionTrust 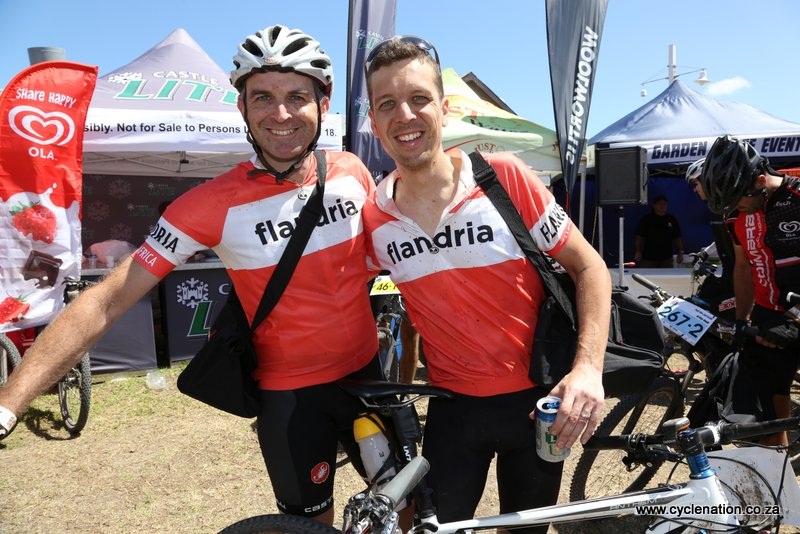 (From left) Steven Dimond and Edrich Fivaz to take on next year’s Absa Cape Epic.

Friends Edrich Fivaz (33) and Steven Dimond (37) from the Northern Suburbs of Cape Town have announced their plans to take on the legendary Absa Cape Epic in 2015 to raise funds for The VisionTrust. Founded by adventurer, businessman and motivational speaker Hein Wagner, the organisation has worked tirelessly since 2007 to assist people living with visual impairment to find meaningful employment and live fulfilling lives.

One of the greatest barriers to enter employment for blind and partially impaired people is the high cost of specialised, assistive computer software. The VisionTrust is dedicated to eliminating these obstacles by raising funds to purchase this expensive equipment, assist employees to physically adapt the work environment for people with disabilities and challenging prejudices around employing the blind.

The team hopes to present one laptop computer customised with specialised software to a deserving blind or partially sighted person at the end of each of the eight days of the race, colloquially described as the ‘Tour de France’ of mountain biking. “The aim is to raise awareness and exposure for the The VisionTrust by getting the public and business involved. Our goal is to raise R200 000 in donations and sponsorships,” says Dimond.

Hein Wagner and his passion and commitment to The VisionTrust inspired the team. Wagner was born blind, but despite this sightlessness has a string of accomplishments to his name. An avid sportsman, Wagner enjoys abseiling, running and cycling; he’s won the World Cup Cricket for the Blind, sailed the Cape-to-Rio yacht race, completed the grueling Ironman triathlon, finished the legendary Absa Cape Epic mountain biking race, completed the extreme Antarctic Marathon on the South Pole and recently accepted the role of Honorary Patron of the Imago Maris, the only ship in the world to be manned by a blind and partly sighted crew. Wagner is also the current holder of the land speed record making him the fastest blind driver in history.

“Our decision to ride the Absa Cape Epic for The VisionTrust started with a desire to give back. We wanted people to understand that disability doesn’t differentiate between race, gender, religion and any other disposition and we both feel so privileged to be living our dream. We saw how hard Hein works to raise funds and awareness for The VisionTrust and since Hein is an Absa Cape Epic Finisher, linking our effort to this cause was logical,” says Dimond.

Dimond continues: “Having known him for a few years now, I can only say that I think he’s inspirational. His ‘can do’ attitude and drive to succeed is second to none. I’m in awe of what he’s achieved and his outlook on life, despite his disability.”

The three times Absa Cape Epic Finisher knows the importance of preparation and does not believe completing the grueling race will be easy. “There are two distinct phases of your journey to the Epic. The first phase requires commitment to the long hours of training. The race, in my opinion, is 20% physical and 80% mental. The second phase requires determination to get through eight days of excitement, joy, pain and suffering. And you need good luck – any- thing can go wrong!”

For Dimond the year ahead has been earmarked for cycling. “My goals include a sub 4 hour Karoo to Coast in September, a good finish in the Wine2Whales in November and a podium finish in the Die Burger Road Race tandem category in December,” he says. Dimond describes himself as balanced, hardworking and determined. While he considers himself to be a gentle person, he is inherently competitive and focused on achieving results. The IT consultant from Kuilsriver loves spending time with his family, walking his dogs and being outdoors, while he has a special interest in collecting model trains of the South African railways.

Fivaz understands that while he is unable to give a blind person the ability to see by his participation in this race, he hopes that by riding to raise funds for The VisionTrust he can help to bridge the communication barrier between sighted and blind people.

Director of Mergers and Acquisitions at Paarl Media, Fivaz loves setting himself a challenge and achieving his goals. He considers the Absa Cape Epic “very much a bucket list item that needs to be ticked off!”. He describes himself as the silent type with a big sense of humor when he is off the bike. The chartered accountant from Durbanville believes that determination is the most important attribute when taking on the Absa Cape Epic and says, “mental toughness and being mental too will help”.

Fivaz was suitably impressed by the event after watching the 2014 Absa Cape Epic Prologue in Durbanville. He then managed to secure an Early Bird Entry and asked Dimond to be his partner, as he has considerable experience of the event. This will be Fivaz’s first attempt at completing the Absa Cape Epic and he is adamant that he will only be doing the race once, yet adds laughingly “famous last words”.

Fivaz’s biggest goal for the coming year is to be a 2015 Absa Cape Epic Finisher. He loves to read, spend time with his wife and his dogs. “Some golf too, if time allows!” Otherwise he hopes to maintain a good balance between work and home, while putting in as much preparation for the Absa Cape Epic as possible.

The team is planning a range of activities to raise funds for The VisionTrust. “From selling Vision Trust wristbands and getting family, friends and members of the community to donate, to lobbying corporate donors for sponsorships. No donation is too small, even a R5 contribution will get us closer to our goal,” says Dimond.

To make contact with the Fivaz-Dimond Team and The VisionTrust, contact the organisation via email Visiontrust@heinwagner.co.za or via phone +27 82 879 6008. Cash donations to The VisionTrust can be made directly to The VisionTrust, ABSA Bank, Santyger Branch code: 630510, Account number: 406 942 3823. Mark the reference ‘Fivaz-Dimond’. Alternately, visit ww.heinwagner.co.za/about-the-visiontrust to make a donation via PayPal using your credit card. Individuals and corporates who do not wish to contribute financially are welcome to make available written down laptops or computers.