Fury over sjambok attack on cyclists 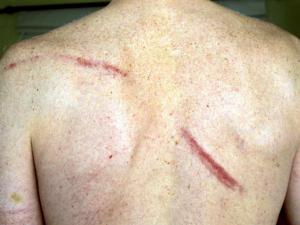 Cyclist William Ferris was attacked with a sjambok near Fish Hoek. Photo Supplied

Cape Town – Cape Town’s cycling community is furious after two Navy employees allegedly attacked riders with a sjambok at the weekend on a popular cycling route near Fish Hoek.

At least two of the cyclists riding in a group of four suffered wounds – one with a cut to the face and a second with deep cut on his back – on Saturday morning after being lashed with the sjambok.

“The information acquired by statements made is that the occupants (of the silver Polo) struck the cyclists with a sjambok. The incidents are spread over several locations, according to reports, and was not an isolated incident in one specific area.

“There have been seven cases reported to both Simon’s Town and Fish Hoek police. This seems to be six cyclists and one runner at this time.”

Van Wyk said an eighth person had filed a complaint of a similar attack on Kommetjie Road in Fish Hoek.

He added that the suspects, who are members of the SA Navy, are facing charges of assault with intent to do grievous bodily harm and will appear in court on Wednesday.

The incident has sparked outrage on online cycling chat sites.

A Stellenbosch University professor William Ferris, 52, and a 40-year-old sales representative, who did not want to be named for fear of reprisals, say they and two other men were riding on Blackhill near Fish Hoek when a silver VW Polo started tailing them.

The sales representative said he glanced over his shoulders and spotted a man dangling out of the car’s window, clutching a sjambok in one hand.

“I felt a massive thump on my helmet and I initially thought it was a rock. When I looked up, I saw a Polo driving behind me. The road was extremely wide and I was not infringing on any motorists – staying at least six metres away from cars,” he said. “He hit me over the head. The tip of the sjambok went over my face and would have ripped my eye out if it was not for my glasses.”

The sales representative said he cycled down the hill and met up with Ferris who was also attacked by the same sjambok-wielding man hanging out of the window of the silver Polo.

“I was hit across my back,” said Ferris.

“I then cycled as fast as I could in the opposite direction. It was quite a shock for me.”

The four cyclists made their way to the Simon’s Town Police Station where they opened four separate cases of assault.

The sales representative thanked Dawie Steenkamp from Fish Hoek Police Station and Chris Lee from the Traffic and Crime Alert Group of Fish Hoek Valley and surrounds for their swift actions which led to the arrests.

Spokesman for the South African Navy, Obed Medupe, has condemned the attack.

He said on Monday that the actions of the employees allegedly involved in the attack was regarded in very serious light.

Medupe said an investigation was under way.

“The military police based in Simon’s Town, as well as other naval personnel, assisted police in locating and apprehending the suspects,” he said.

“I cannot comment on what will happen to the suspects as the investigation is still at a very early stage.”

Cyclists have taken to online chat sites to vent their outrage.

Bike Hub user DJR said: “They should revive the age old punishment of kneel-hauling especially for these idiots.”

Raptor-22 said: “It is highly likely alcohol was involved. Secondly, let us face it, this level of callous stupidity is not confined to South Africa. But we do appear to dig deeper to find new levels of inhumanity than many other places.”

Users on the Facebook group, Blackhill Mountain Biking, also raised their concerns and urged those who experienced similar incidents to come forward.