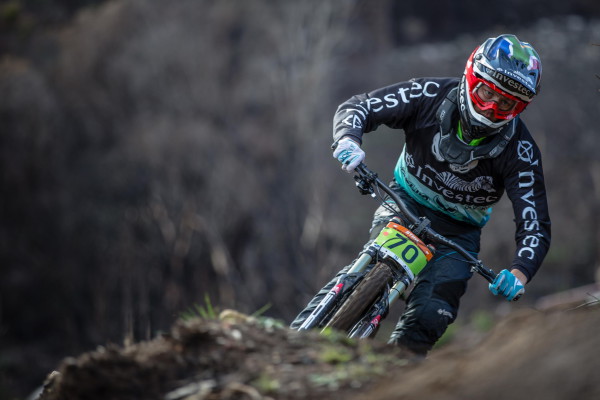 Stellenbosch – It was a day to savour for Stefan Garlicki as he powered his way down the Jonkershoek track to a maiden South African downhill title at the 2015 Stihl SA MTB Championships presented by Subaru Cape Town/Novus Holdings in Stellenbosch on Sunday.

The reality of being a national champion has finally come true for the Western Cape local and just being able to call himself the national champion is something that he has not quite come to terms with as he celebrated a task well done.

“It really hasn’t quite sunk in yet to be honest!” he beamed. “I have wanted this title for so long and I have been working really hard for it so to say that I am the national champion is something that will take some time to get used to!”

It was a barnstorming run from Garlicki who flew down the Jonkershoek course last to take the championship title by nearly two seconds from Theo Erlangsen in second and three-time national champion Tiaan Odendaal in third place.

It had been a solid weekend of riding from the 24 year old who managed to finish the seeded run in first position and although he felt a slight amount of pressure he knew that he had what it would take to win the national jersey.

“I felt really good going into the final and with my number one seeding it gave me a little bit more confidence although there was an added bit of pressure being the last guy to go down the hill.

“The rain earlier in the week made it a bit tricky so I tried to keep it smooth during my seeding run and I managed to get through clean but I understood that I was going to have to push it a bit more in the final.

“With the rain having made the course a bit slippery I understood that it was going to be really easy to make a mistake during my seeding run so it was important that I made it down safely.

“The times were really tight which meant that I was going to have to go harder in the final if I wanted to win.

“It really isn’t that often that you can say that you had a really good run – I think I did today.

“If I had got to the bottom and I hadn’t won then there were no regrets because I don’t think it could have gone any better,” the Investec star mentioned.

It has been a busy build-up to the national championships for Garlicki who has been overseas racing the World Cup circuit in Europe and came into the national showpiece in top shape as opposed to previous years.

“It was great to be 100% for the national champs because in the past few years I have been battling a bit with injury and I felt that I couldn’t attack as much as I wanted to in order to challenge for the title.

“This year was different and I am just really happy that I have finally managed to get my hands on this national title,” a satisfied Garlicki said.

In the ladies field it was experience and local knowledge that pulled through as Cape Town resident Rika Olivier registered the fastest time on the day.

The veteran has been racing for years and that has not changed her passion for the sport or her competitive edge.

“I really just enjoy racing,” she mentioned. “I train a lot with guys so I try and see how close I can get to them and give them some stick if I beat them!

“I will be travelling to World Champs in Andorra this year. It was a late decision but I love racing in my age group against girls that are the similar strengths.”

The Junior Men’s title went to Jonathan Philogene whilst Jasper Barrett cleaned up in the Junior Boys winning the showdown by 21 seconds.

More information can be found at www.cyclingsa.com