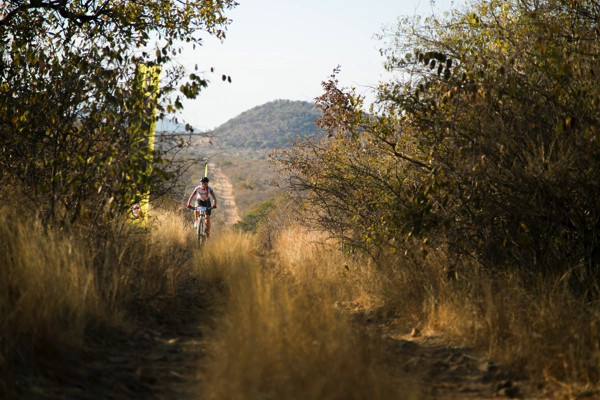 The 2016 Gauteng Nissan Trailseeker Mountain Bike Series will get underway on Saturday in true South African bushveld style – at the popular Lionman race in the Mabalingwe Game Reserve, north of Pretoria.

There are four race distances on offer catering for all ages and levels of fitness, while some route changes from the 2016 edition will ensure a challenging, yet rewarding experience for all entrants.

The 70km marathon will once again include the formidable climb to the Vodacom tower, the highest point in the region. The descent that follows makes the ascent worthwhile and the views of the Waterberg mountain range are simply spectacular. There’s just under 1000m of vertical ascent in total, fairly evenly spread after a relatively flat first 15km.

The 40km race has a total of 336 metres of ascent and offers participants a good mix of terrain and vegetation. The 20km Fun Race and 10km Fun Ride are both relatively undulating with routes created to embrace the bushveld feel. Because the event takes place entirely in the Mabalingwe Game Reserve, game sightings and sometimes, close encounters, are an attractive feature. Resident game includes various antelope, giraffe, zebra, wildebeest, rhino, hippo and buffalo.

The organisers, Advendurance, have redesigned the format of the Nissan Trailseeker Series events for 2016 by creating two separate routes with separate starts to eliminate the risk of bottlenecking and overlapping of participants from the different distances.

“We will send the 70km riders off first and then, later, send the 20km Fun Race off from the same start. Using the same principle, the 40km and 10km Fun Ride events will share the same sequence with a separate start. By doing this, we hope to significantly improve start and finish area efficiency as well as reduce pressure on the water points. We can also schedule the race starts closer together, which, in the hotter weather is a big benefit for the riders,” said Wessel van der Walt of Advendurance.

“It’s always been logistically challenging sending 3000 riders off onto four different race routes. Previously, we would send our first start batch off at 07h00 and the last one at 11h30! For this Saturday’s Lionman race, with the new format, we will start the first batch at 08h00 and the last batch at 10h15,” added Van der Walt.

In the men’s marathon, last year’s winner, HB Kruger (Team Telkom) will return to defend his title. But he’ll be up against strong opposition with the likes of Nico Bell, Gawie Combrinck (both Team NAD) and South African marathon champion, Max Knox (Valencia) notable names on the early start list.

Multiple South African champion, Robyn de Groot (Ascendis Health), is on the early start list, but will not compete due to an injury sustained in a crash at the weekend. In her absence, Amy Beth McDougall (Valenica), Theresa Ralph (Galileo Risk) and Vanessa Bell (Bells Cycling) will be the likely title contenders. Online entry can be done at www.trailseekerseries.co.za.

Besides ensuring a high-quality mountain biking experience, not too far from the cities of Pretoria and Johannesburg, the Nissan Trailseeker Series, now in its seventh year, also offers generous TV coverage, good prize money and caters well for non-riding supporters, a blend of elements that have made it one of the most popular mountain bike series in the country.