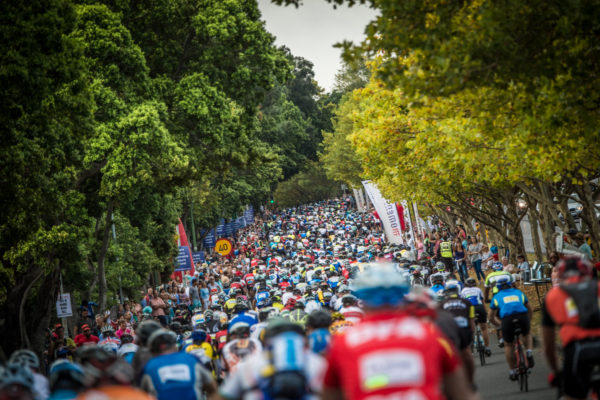 (Cape Town, 15 August 2016) The Cape Town Cycle Tour is turning 40 in 2017! We are excited to commemorate this massive milestone in the history of SA’s most iconic cycling event and you can be a part of it.

Grown from humble beginnings in 1978 when just 525 riders took part, 2017’s 40th event will see 35 000 cyclists line up in Hertzog Boulevard to tackle the spectacular 109-kilometre loop of the peninsula. In so doing, they will not only participate in the world’s largest timed cycling event, but be part of a special day in the history of the event.

The 40th Cape Town Cycle Tour will take place on 12 March 2017, reverting back to its traditional annual date – the second Sunday in March. In an effort to continuously refine and improve the entry application process, we are increasing the allocation of general entries in 2017 by 5000, while charities will be allocated 2000 entries.

The free application for a general entry will be possible from 1pm on Wednesday, 17 August and the application window will remain open until 4pm on Tuesday, 23 August 2016.

Details of the phased application process to secure a general entry to the 2017 Cape Town Cycle Tour is as follows:

From Wednesday, 17 August at 1pm to Tuesday, 23 August at 4pm, prospective riders can apply at www.capetowncycletour.com. Doing so amounts to an indication of interest only, and will not ensure an entry. Prospective entrants will be required to update their details at the same time.

During the week of Monday, 29 August, successful applicants will receive confirmation emails from the Cape Town Cycle Tour Events Office to advise that they have been awarded an entry.  Unsuccessful applicants will also receive an email notification and will be invited to enter via a supporting charity or by means of the official substitution process in February 2017.

Successful applicants will have until Monday, 5 September at 1pm to make payment to secure their entry.  Payment not received by this date and time, or the applicant’s option to decline the entry, will result in that entry being made available to a previously unsuccessful rider.  Local general entries will cost R510 per rider and PPA members will pay R480.

As part of the phased entry approach, loyal supporters of the event who have ridden 21 or more races will be invited to enter early – from the Monday, 15 August to Monday, 05 September – and will not be required to go through the general application entry phase.

Additionally, the general application entry phase will not apply to international entrants who may enter and pay to participate in the 40th Cape Town Cycle Tour anytime between Monday, 29 August 2016 and Friday, 24 February 2017.

Keep up to date with developments of the Cape Town Cycle Tour by liking our Facebook Page at www.facebook.com/cycletour or by following us on Twitter at @CTCycleTour.