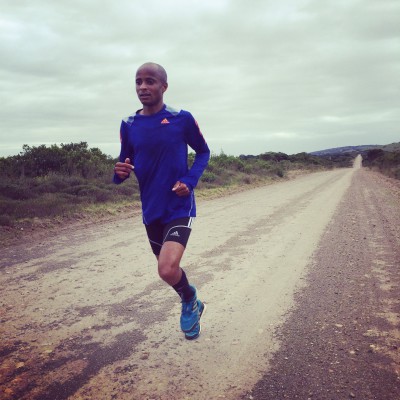 South Africa’s top middle distance athletes are ready to take on the foreign challenge in the inaugural FNB Cape Town 12 ONERUN on Sunday 17 May.

“I know the Kenyan’s will run as a group, they always do,” says World Championship 5000m finalist Elroy Gelant. “My goal is to get in between them and stay with them to try and spoil the party.”

Lusapho April, thirteenth at last month’s Boston Marathon, is also excited about the challenge and the prospect of racing such an elite field. “We need these races in South Africa. With the top ten men and women in South Africa signed up, it is going to be a great race. With the likes of Emmanuel Bett and Moses Masai, both sub 27 minute for the 10 000m and Moses Kipsiro the double Commonwealth Champion coming to race us, we will have to race hard.”

Gelant was troubled by a hamstring injury at the recent South African National Championships that he picked up at the Two Oceans Half Marathon and had to withdraw midway in the 10 000m final. He also was not at his best in the 5 000m, but feels he is back in the shape he needs for the race on Sunday 17 May. “The hamstring is fine now, the base work is all done and my speed is also all there, so I will be fine on race day. I have to be.”

In the absence of Stephen Mokoka, the other major South African challenge will come from the World Universities Half Marathon Champion, Gladwin Mzazi.

The 26 year old won the Wally Hayward 10km on Friday 1 May, clocking 30:04 on a very tough course. “I’m in good shape now and am hungry for the race on Sunday 17 May,” said Mzazi. “I want Masai,” he joked, but it was clear that behind the smile there is an intensity not seen in Mzazi for a long time.

“2015 is a big year with the World Championships and building up to Rio in 2016, so I need a really good performance in front of the South African’s to stake my claim both locally and Internationally.” Asked about the line up Mzazi was quick to heap praise on the organisers.

“We always have to travel to race this calibre, so it’s really good for us to have them at home for a change. Of course it means we need to bring our A game. We cannot let them come here and take our title,” said Mzazi with his ever-present smile.

The main South African challenge is expected to come from April, Gelant and Mzazi, throw in the likes of Joel Mmone, Lucky Mohale and local boy William Kaptein and a fast race is on the cards. As yet, there is no definitive talk about running as a team to try to break the foreigners, but there have been rumblings to that effect.

“We have not yet discussed tactics,” says Gelant, “but we know the Kenyan’s always run in a pack. At the World Half Marathon Championships Stephen (Mokoka), Lusapho (April) and I ran as a team for most of the way and finished fourth as a team, so maybe we need to look at running as a team on the day.”

Racing as a team or individually, one thing is certain, come May 17 there will be no holding back and Cape Town will witness racing like never before.