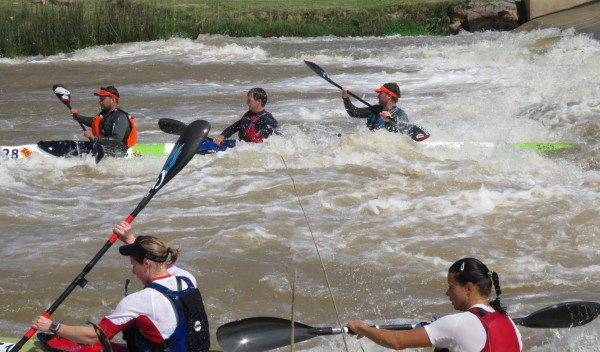 Spur, who won the K2 1000m gold in Japan in 2003, decided to make the trip to South Africa after a chance meeting with a group of South African paddlers at the Marathon World Cup in Brandenburg in Germany in August.

“Through a friend of mine Tommy Kersten, who used to live in Port Elizabeth, I got to meet Greg Louw, Andy Birkett and Bridgitte Hartley at the World Cup and we went out one night where Greg, who is from Cradock, told me about the Fish,” said Spur.

“I became really interested in doing this race and he recommended that I do it in a K3 with some local paddlers who know the river well.

“He made contact with two local guys, Michael Rice and Jonty Dubrowsky, who kindly agreed to take me down the river!”

30 year-old Spur connected with the two locals in time for the annual Pre-Fish, which takes advantage of the two week water release the Hansa Fish capitalizes on every year, and covered the entire race course with his two new partners.

“It was an exciting experience!” said Spur. “It was tough because I had no idea of the distance that we had to paddle while the trees and some of the big rapids were new for me.

“The decision to go in the K3 was a good one! It is my first experience in a K3 and it is very different to the kind of boats that I am used to paddling but it has been a great experience so far.

“We decided not to shoot Keith’s Flyover on the pre-Fish, just in case we damaged our boat,” said Spur, who hails from Leipzig and grew up in Potsdam.

“We will decide nearer the time whether we will shoot Keith’s during the race or not!” he added.

Jakub Adam and fellow Czech Republic marathoner Michael Odvarko plan to mount a serious podium challenge at this year’s race in a bid to become the first foreigners to win this prestigious title.