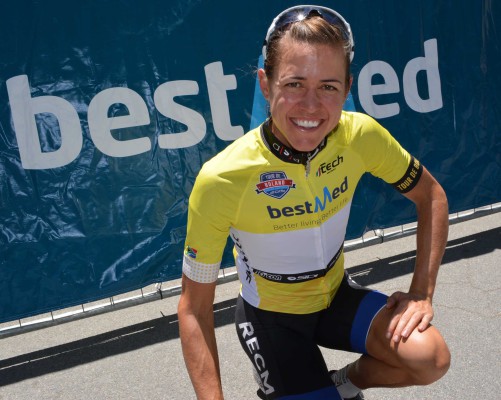 South African export Dylan Girdlestone showed his tour riding skills when he took a solo win on the mountainous second stage of the Bestmed Tour de Boland, presented by Pinarello, on Tuesday.

The 111km stage took riders from Worcester to Op-die-Berg near Ceres via two major passes.

The two-time Bestmed Jock winner bided his time in the bunch on Michell’s pass before going clear in a small group of 13 after the summit of Gydo pass.

Girdlestone kept his cool in temperatures that exceeded 40 degrees Celsius to leap clear of his breakaway companions about eight kilometres from the finish.

Girdlestone had timed his move to perfection as the rest of the group were caught by the main peloton about three kilometres later.

After finishing safely in the leading bunch the day before, the win provisionally puts Girdlestone in the yellow jersey ahead of Kruger and Okubamariam.

Girdlestone said he was delighted to have gotten a winning result on home soil in his first tour for the team from Down Under.

“I’m ecstatic to have pulled off the win today, when I didn’t think I was going to.”

He said his team had planned for a sprint finish but the racing had not turned out that way.

A flurry of attacks started as soon as the riders left Worcester with Europcar SA’s Bradley Potgieter attempting the same early break as the day before.

His teammate Christian Jooste put in the first major move of the day as the peloton entered Slanghoek Valley.

He was eventually hauled in after 30km and a series of attacks followed as the peloton turned towards Ceres.

By the 45km mark, a 17-strong lead group had opened up a lead of over minute on the main bunch, which they extended on Michell’s Pass.

Track specialist and Paarl Boxing Day 25-mile winner Evan Carstens pulled off a big surprise when he took the king of the mountains prime on top for Team Giant.

The two built up a maximum lead of three and a half minutes before Somchiza got left behind on the approach to Gydo pass after 80km.

Kaka was reeled in by Westvaal’s Paul van Zweel four kilometres later and the latter proceeded to take the second king of the mountains prime at the top of the climb.

On the plateau after the ascent, the leading group kept splitting and rejoining as they headed for the finish.

“It split and came back together and I came back from the second split and counterattacked,” said Girdlestone.

“I just put my head down and kept going to the line and I managed to stay away.”

The 25-year-old said he had not planned to challenge for the overall win but that he would be in the mix for the remainder of the tour.

In the women’s tour, Lise Olivier’s missed turn before the finish cost the Time Freight E rider the overall lead.

Defending champion Ariane Kleinhans of RECM claimed the stage victory to move into first place in the general classification ahead of Olivier.

Anriette Schoeman finished third to assume the same position in the overall standings.

“Lise and I went quite hard on the last climb and broke away from our bunch,” said Kleinhans. “I took the win but it was not quite as it should be.”

Wednesday’s third stage features a 30km individual time-trial, with a total ascent of 165m, from Ceres to Tulbagh.