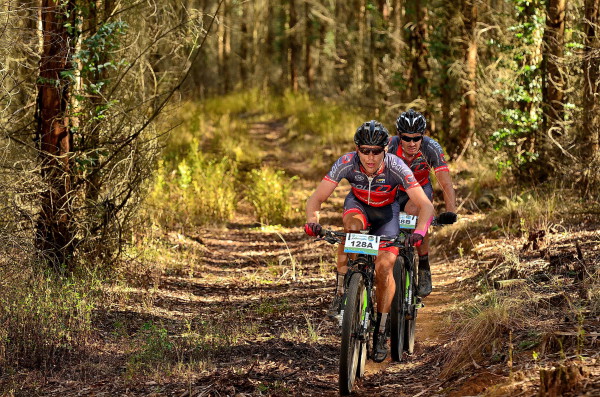 EAI South Africa’s Gawie Combrinck (front) and Johann Rabie (back) will look to build on their recent Old Mutual joBerg2c success when they take on the 2015 Nedbank sani2c. – Jetline Action Photo/
Gameplan Media

Himeville – The 11th Nedbank sani2c mountain bike stage race the biggest of its kind in the world, gets underway on Tuesday as the first of three waves of around 1500 competitors set off on their three day long journey from Glencairn Farm at the base of Sani Pass to Scottburgh Main Beach on KwaZulu-Natal’s South Coast.

Tuesday’s start of the Trail event will be followed by the Adventure’s participants on Wednesday before the Race’s field, that includes many of the sport’s top elite competitors, tackle the event’s spectacular trails from Thursday.

While the more social fields of the Trail and the Adventure will look to soak up the magnificent scenery and diverse riding terrain as well as enjoy the company of their fellow off-road adventurers, Thursday’s Race start will be far more competitive as the racing snakes of the field bid for their right to lift the coveted trophy come Saturday’s finish.

Biogen-Volcan’s defending champs Max Knox and Kevin Evans have a remarkable record at the world famous three day event with either one or both of them having stood on the top step of the podium every year of the race’s existence bar one.

The pair will however have to overcome one of their stiffest title challenges of recent years as a powerful men’s field gears up to contest Thursday-Sunday’s clash. 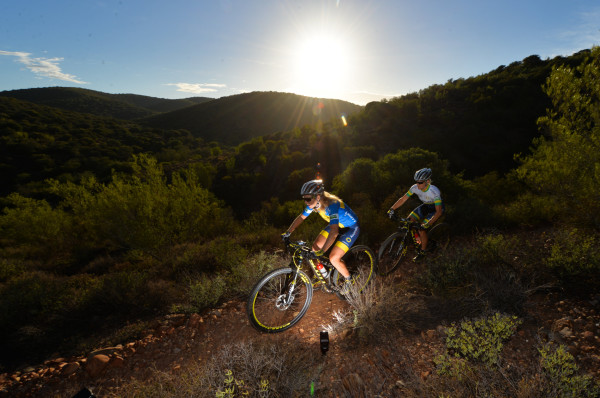 The women’s title race is set to be just as tightly contested as some of the country’s finest stage racers and international competitors square off for this year’s spoils.

The mixed race of 2015 will be another hard fought one as Sasol Racing’s Yolandi du Toit and Johan Labuschagne go head to head with Hayley Smith and Darryn Purtell of Bell Equipment.

A little further back in the field but unlikely to be any less competitive than their elite compatriots, a wealth of former Springbok and Sharks personalities as well as 2009 Dakar Rally winner Giniel de Villiers are certain to contribute to the unique and cherished atmosphere of this annual event.

The event’s reputation for top class hospitality is set to continue to break new ground as the race’s new registration and start venue at Glencairn and the second overnight stop at Jolivet Farm.

Community involvement and upliftment – a key element of the Nedbank sani2c – will once again see many of the local communities contribute to the 2015 event with more than ten local schools set to play an important role in this year’s showpiece.

The race’s rolling programme of tree planting will continue in 2015 with special attention being focused on the new start at Glencairn. The race’s title sponsor Nedbank has added R20 000 to the tree-planting project that has already seen over 8000 saplings planted, by encouraging their guests to reduce their kit allocation from three sets to one, and channeling the saving into the greening initiative.

The 11th edition of the Nedbank sani2c gets underway when the Trail event takes place from 12-14 May 2015. The Adventure then unfolds from 13-15 May before the cream of the country’s top mountain bikers do battle during the Race from 14-16 May. More information can be found atwww.sani2c.co.za