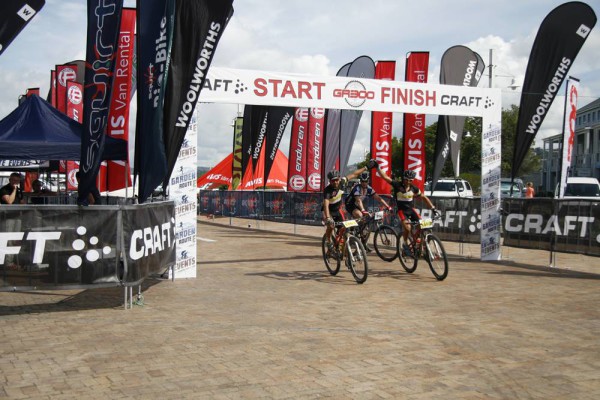 The 3rd leg of the GR300 got off to a gorgeous sunlit start from the Quay Four race village on Thesen Islands Harbour Town, with cyclists barely showing signs of having had two demanding days of hard core riding behind them. Today’s 85km route offered fast tracks, combined with some punishing climbs, which always manages to disperse the pack.

After the 6km lagoon side neutral zone, the R 10 000 Craft Attack gave the front runners an irresistible incentive to hit the red zone in an attempt to claim the cash prize. Craig Boyes (team Asrin) led the attack but not for long as the pairing of Lourens Luus and Adriaan Louw – Team Contego PROS streaked ahead, working in tandem to take the prize.  Timo Cooper timed  it perfectly and with just 2 bends to go to get to the top of Phantom Pass, took the lead – ultimately claiming sought-after purse.

The riders soon regrouped into their teams and from there the route took them through the Goudveld Forest and over the Knysna River into the Gouna Forest and then onto towards Simola.

There was then an exciting sprint to the finish and although the CONTEGO Pro’s Lourens Luus and Adriaan Louw crossed the line of the 3rd leg first, our local hero Kevin Evans and his partner Max Knox of the Team Biogen-Volcan, who won the first two legs, are the overall team winners of the 2015 GR300.

The ladies Sasol Team, experienced riders Yolande De Villiers and Bianca Haw crossed the finish line first every day and were crowned the ladies champs of the race.

The Sahmurai’ – Stephan Sahm – proved unbeatable in the men’s solo race and San Mari Woithe came out tops in the female solo!

So another GR300 is in the bag. Five years on, this event is now firmly on the map as one of THE most challenging 3-day stage races in the South Africa, luring scores of top local and international riders and what makes it even more appealing is the fact that it is set against a backdrop of exceptional beauty.

Until next year, so long and thanks for the ride!