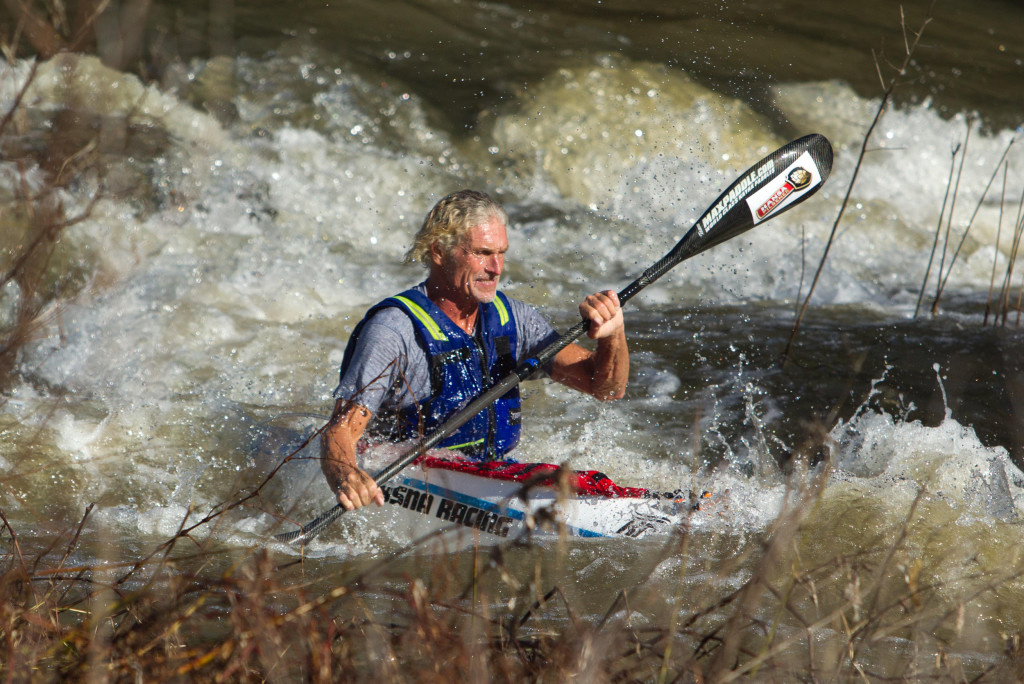 Grand master Lee McGregor aims to go even better than his 2013 eighth placed effort when he takes on this year’s Berg River Canoe Marathon from 16-19 July. – John Hishin/
Gameplan Media

Paarl – 62 year old Lee McGregor has had a change of heart and has set his sights on the 2014 Berg River Canoe Marathon from 16 to 19 July, hoping to improve on the staggering eighth place finish he produced last year.

McGregor, the father to nine-time Berg champion and current World Marathon Champion Hank McGregor, stunned the race last year by racing in the top ten but then initially stated that he would not be taking part in the race again in 2014 as he wanted to be present for the birth of his grandson in Durban which is expected at the same time as the four day race in the Cape.

McGregor’s change of heart was precipitated by his son Hank, in typically quirky McGregor fashion.

“I got a call from Hank saying that I had been sponsored a trip to do the Berg this year, and he personally hoped that I would accept the offer to keep the McGregor name alive in the Berg for another year,” said McGregor.

“When I pressed him for more details of who the sponsor was he told me that the sponsor would need a babysitter next year so that he could come back to try and win another Berg title,” he chuckled.

McGregor gleefully accepted his son’s offer and has committed to a solid race build-up programme that has already left him in superb shape, evidenced by his top ten finish in the SA Surfski Championships at the FNB Mazars Durban Downwind last weekend.

“I rushed into the Berg last year and only had a few months training under my belt,” said McGregor. “I wasn’t fit enough and I hurt – a lot!”

“More importantly I didn’t really know where I was going so I was always tagging along behind the Cape guys to follow their lines through the trees and the channels, much like Sbonelo Zondi was doing as well. That’s one of the reasons why we were left off that front racing bunch for much of the race.

“This year things will be different,” he said with conviction. “I am a hell of a lot fitter. I have a clearer idea of where I will be going and we will be going down a week before to trip the river and learn the sneaks and lines.”

The ‘we’ Lee McGregor refers to is his Durban-based MacSquad training group, a group of around 40 talented paddlers who have been working with him for over a year, producing consistently impressive results in river races, flatwater marathons and surfski events.

With a vastly improved preparation to the Berg than he had last year, McGregor will be looking to better his 2013 eighth place finish but is loathed to make predictions or set position based goals.

“It is the hardest race in the world and anything can happen, and often does, over the four days,” says McGregor.

“All you can do is pitch up in the best possible shape and take your chances as best you can.”