Hank McGregor sets his sights on a fourth Drak title 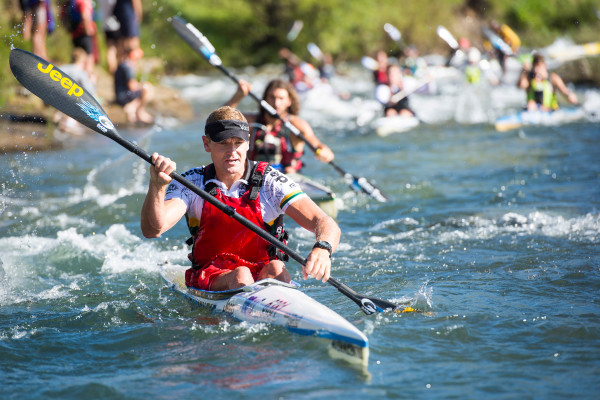 Hank McGregor (Jeep Team/Euro Steel) will be hoping to celebrate his 38th birthday by winning the N3TC Drak Challenge when it ends on Sunday 24 January 2016. Anthony Grote/Gameplan Media

Underberg – Six times world marathon champion Hank McGregor has lined up a shot at a fourth title at the N3TC Drak Challenge Canoe Marathon on 23 and 24 January, hoping to overturn a two year run of misfortune on the popular two-day race through the foothills of the Southern Drakensberg.

“I am full go for the N3TC Drak Challenge,” enthused McGregor, who is training for his K2 challenge for the FNB Dusi title with team mate Jasper Mocké.

“The Drak is a fantastic race, and when there is good water it has to be one of the best river races on the calendar,” he added.

McGregor, like hundreds of regular N3TC Drak paddlers, is anxiously watching the daily reports on the level of the Mzimkulu River which has been hard-hit by the drought gripping the region.

“I must admit that the lack of water at the moment is a concern but hopefully the heavens will play ball on race day,” said McGregor.

“We are all hoping for rain, otherwise rock-hopping will be the only thing on the Drak menu. I have faith that we are due a full Drak again,” he said.

The Jeep Team/Euro Steel ace, who will turn 38 on the final day of the N3TC Drak Challenge, became the first paddler to win a hat-trick of victories at  the Drak Challenge when he took back-to-back titles from 2010 and 2012. However he skipped the 2013 race before his bids in 2014 and 2015 ended in frustration.

He was locked into a  thrilling duel with Andy Birkett in tricky low conditions in 2014 when he ran out of water in the technical Mhkulu Rapid twenty minutes from the end of the race, allowing a grateful Birkett to scamper away to claim his maiden Drak title.

Last year he looked to be in a dominant position on Day One before his race was effectively ended when the rudder wheel of his kayak hit a rock, crimping the rudder cable against the rudder wheel, leaving him unable to steer his boat through the tight rocky rapids.

He eventually had to stop and wrench loose the rudder cable, costing him three positions in the race, which was once again won by Birkett.

“Last year just wasn’t my year and the boat admin cost me,” said McGregor. “Hopefully I will have a clean, admin-free race this year and I’ll be there in the mix for the title.”

McGregor said that the timing of the N3TC Drak made it ideal training for the FNB Dusi, and while he would have to put his K2 training with Mocké on hold that week, both regarded the Drak is as an essential part of their Dusi training.

He added that the Underberg race was high on his list of priorities because it always attracts the cream of the country’s river racers.

“I am sure that all the big guns amongst the SA paddlers will be there and maybe one or two of the internationals out for the Dusi will put their hand up,” said McGregor.

The race organising committee is keeping a close eye on the level of the Mzimkulu River in the build-up to the race, and have slated a number of options for the race should the desperately low conditions persist.